In case you’re feeling nostalgic about opening fire on a battlefield from a heavily-armed military helicopter, an arena in Las... 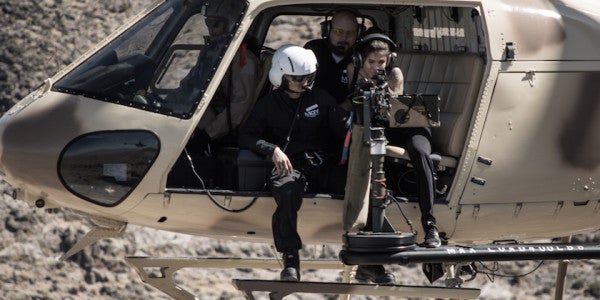 In case you’re feeling nostalgic about opening fire on a battlefield from a heavily-armed military helicopter, an arena in Las Vegas will now let you pay them the totally reasonable price of just $689 to play machine gunner in a battle-ready helo, complete with 360 degrees of pure desert sand.

The company, helpfully called Machine Gun Helicopters, is attempting to recreate an authentic military door gunner experience by taking customers up in a modified Eurocopter AS350 B2 A-Star helicopter and letting them fire off 100 rounds from a fixed M249 (SAW) belt fed machine gun or an M60 belt fed machine gun.

“Once in the helicopter customers will experience two gun runs on our purpose built aerial gun range under the direction and control of our helicopter range masters,” the site reads.

In order to attend, you must be at least 18 or 15-17 with a guardian’s consent, you can’t be drunk, and you definitely can’t be pregnant. Sounds reasonable to us.

So if you’re in Vegas and you have roughly $700 to throw away, give it a shot. It sounds better than wasting your hard-earned cash trying to play the slots.