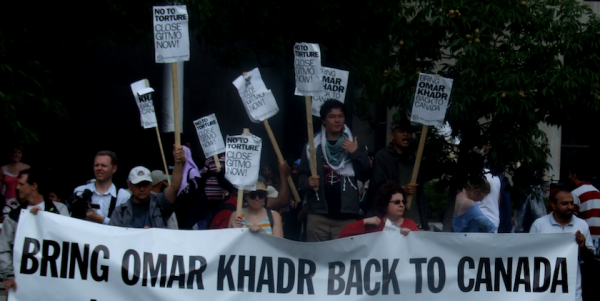 A retired U.S. Special Forces soldier accused Canadian Prime Minister Justin Trudeau of treason after the government of Canada issued an approximately $8 million settlement to the former al Qaeda militant who blinded him and killed another American commando during a firefight in Afghanistan in 2002, Fox News reports.

“I don’t see this as anything but treason,” Layne Morris, a former Army sergeant first class, told the Toronto Sun over the weekend. “It’s something a traitor would do. As far as I am concerned, Prime Minister Trudeau should be charged.”

19SFG Special Forces soldier Christopher Speer being unloaded at Bagram Airbase after sustaining head injuries from a grenade thrown during a firefight in which Omar Khadr was captured.DoD photo

Khadr, who had arrived in Afghanistan with his al Qaeda fighter father, spent a decade as a detainee in Guantanamo Bay and was convicted in 2010 by a U.S. military commission of killing Speer with a grenade. After pleading guilty to several other charges, he was sentenced to eight years in prison. Morris has always maintained that Khadr threw the grenade that wounded him, as well.

In 2015, a federal judge in Utah awarded Morris and Speer’s widow, Tabitha Speer, a $103 million settlement in a lawsuit filed against Khadr, who was allowed to return to Canada two years after his conviction to serve the remainder of his sentence. Khadr was released from prison in May 2015 pending an appeal of his guilty pleas, which he contends were made under duress.

In early July, the Toronto Star reported that Khadr would receive a $8 million settlement after he sued the Canadian government for $20 million for allegedly conspiring with the U.S. to violate his constitutional rights, according to BBC.

The Canadian Supreme Court ruled twice — the first time in 2010 — that Khadr had been interrogated under “oppressive circumstances” at Guantanamo and that Canadian officials were complicit in his mistreatment. An anonymous source familiar with the case told the Canadian Press wire service that the Trudeau government wanted to “get ahead of an attempt by [Morris] and [Speer] to enforce a massive U.S. court award against Khadr in Canadian court.”

On top of the settlement, Ottawa also issued Khadr a formal apology. “We hope that this expression, and the negotiated settlement reached with the Government, will assist him in his efforts to begin a new and hopeful chapter in his life with his fellow Canadians,” said Foreign Affairs Minister Chrystia Freeland and the Public Safety Minister Ralph Goodale in a statement.

On July 8, Trudeau defended the deal during a press conference at the G-20 summit in Germany, saying, “The charter of rights and freedoms protects all Canadians, every one of us, even when it is uncomfortable. This is not about the detail of the merits of the Khadr case. When the government violates any Canadian’s charter rights, we all end up paying for it.”

In an interview with the Sun, Morris vehemently criticized the Canadian government for siding with Khadr, whom he believes is a fully radicalized terrorist, and not the reformed child soldier his defenders have long described him as.

Khadr told The Canadian Press on July 7 that he is a different person now than he was in 2002, and that he wants to finish his education and pursue a career in the medical field. He also said he hoped the “talk about settlement or the apology does not cause people pain and if it does, you know, I’m really sorry for the pain.”