Get ready to grab your wallet: SilencerCo has teamed up with Michigan-based Dakota Tactical Firearms to create an extremely limited,... 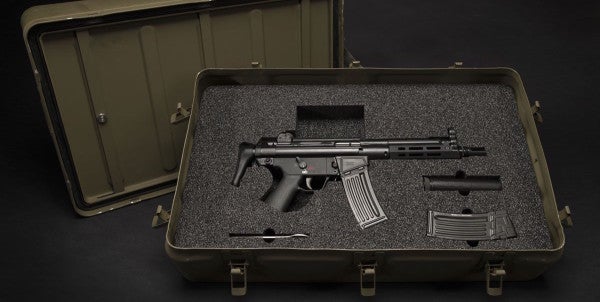 Get ready to grab your wallet: SilencerCo has teamed up with Michigan-based Dakota Tactical Firearms to create an extremely limited, extremely badass run of slick .300 BLK carbines.

Part of SilencerCo’s Summit series, the special edition DTAC D300 comes with all sorts of sweet features, including a matched Omega suppressor and a setup based on the classic Heckler & Koch roller-delayed blowback action, like the one used in the legendary HK G3 and MP5. The DTAC D300 also comes from deep roots, sharing a lineage with the smooth compact 5.56x45mm HK53 carbine favored by some special operations forces in the 1990s.

The Summit series D300 sports a 8.3-inch, free-floating fluted, cold hammer-forged barrel, and a tungsten-filled, full-auto sear-ready bolt group. It also has DTAC modular handguards, an A3 collapsible stock, and a cool HK Black Duracoat finish. The handguard has M-LOK interfaces, and a 1913 picatinny rail fixed to the top of the receiver for mounting optics. Users can also use SilencerCo’s ASR Flash Hider to slap on the Summer Edition Black Omega 300 can. And, as if that package isn’t enough, the D300 comes packed in a U.S. military aluminum storage chest complete with custom foam inserts to hold the weapon, suppressor, spare magazine, and even an attached optic.

Sold exclusively through Texas-based Capitol Armory, just 10 of these ultra-cool carbines are available. Unfortunately, this puts a heavy premium on the guns, which are on the market for no less than $7,125. Still interested? Good. Just remember that you’ll have to pony up for the federal tax stamps for the suppressor and the short barrel rifle set up as well.

If you’re in the market for the ultimate .300 BLK rig that isn’t an AR, the D300 is for you. That is, if your checking account can handle it.