On The Dark Web, 3D-Printed Gun Designs Sell For As Little As $12

The marketplaces of the Dark Web are one-stop shops for criminals looking for drugs, weapons, and even explosives. And increasingly,... 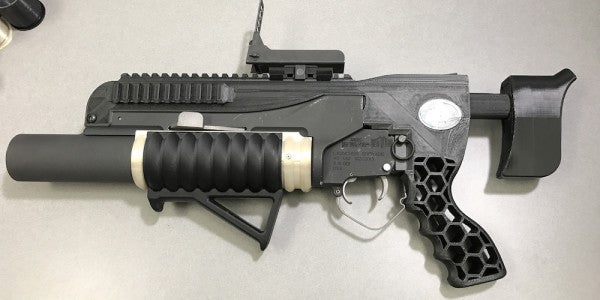 The marketplaces of the Dark Web are one-stop shops for criminals looking for drugs, weapons, and even explosives. And increasingly, they are also making more available “both manuals on how to manufacture firearms and explosives at home and 3D models to enable home-based printing of fully functioning firearms or their parts,” according to a new report from RAND Corporation.

The report, which collected dated from 12 “cryptomarkets” in September 2016, found that while illegal arms account for only 1% of total items sold on the dark web, these marketplaces can still become viable platforms for lone-wolf attackers and small groups looking to acquire weapons and ammunition.

“The dark web is both an enabler for the trade of illegal weapons already on the black market and a potential source of diversion for weapons legally owned,” the report’s lead author, Giacomo Persi Paoli, said in a press release. “Recent high-profile cases have shown that the threat posed by individuals or small groups obtaining weapons illegally from the dark web is real. The ability to not only arm criminals and terrorists, who can make virtually anonymous purchases, but also vulnerable and fixated individuals is perhaps the most dangerous aspect.”

Further, the report found that nearly 60% of all firearms sales originate from the United States, due to its more relaxed gun regulations, and are then shipped to other parts of the globe.

One of the most interesting, and worrying, products available on the Dark Web are CAD, or computer-aided design, files for 3D-printed guns and gun components. RAND found that some of the digital files for 3D printing contained much more than one design. Some “providing files for printing of a larger number of different firearm models and components” including high-capacity drum magazines, bump-fire stocks, and parts that can replace weapon components that carry identifying marks such as serial numbers. RAND further reported that these components could severely “hamper the ability of tracing illegal fire-arms back to their last legal owner.”

The design files for 3D-printed guns have since become available on the Dark Web’s illegal marketplaces like Silk Road, AlphaBay, and Hansa. RAND found that on these sites they could be purchased for as little as $12, just 10% of the price of traditional firearms available on the Dark Web. New Scientist spoke to Paoli, lead author of the report, who confirmed the impact the Dark Web could have in the future: “It could revolutionize how normal people purchase firearms. It’s a game changer.”

This raises some obvious legal issues for unregistered firearms manufacture and ownership and the potential for use in criminal activity: A 3D-printed gun could be the ideal disposable weapon. Because the files are electronic they can be simply downloaded — there is no postal address needed and no physical trail left for investigators to follow.

The concept of 3D-print firearms is not new; the idea has bounced around academic and industry circles and the media for the last few years. Occasionally, they have appeared freely online, published by activists such as Cody Wilson. Wilson founded Defense Distributed, an online nonprofit that develops and publishes open-source gun designs intended to be printed by anyone with a 3D printer.

Defense Distributed made waves back in 2014, when they launched the Liberator. A polymer, 3D-printed, single-shot pistol named after the famous World War II pistol. The plans for the Liberator were offered freely on Defense Distributed’s website until the U.S. State Department forced the company to take the plans down.

RAND’s report comes just as it has been announced that AlphaBay and Hansa — two of the Dark Web’s largest marketplaces, were shut down by a large-scale international operation by police forces in the United States and Europe. “[T]he US Federal Bureau of Investigation (FBI), the Drug Enforcement Agency (DEA) and the Dutch National Police, partnered to shutter the sites accused of allowing thousands of vendors to sell illegal drugs, of which Europol said there were 250,000 listings on AlphaBay alone, with 200,000 members and 40,000 vendors,” The Guardian reported July 20.

Paoli believes that the sale of illegal weapons on the Dark Web can be tackled; however, the new element of 3D-printed weapons and components may be more difficult to address. Paoli feels that this “new element will require further investigation as 3D printing continues to develop and grow,” but notes that “this does not mean that existing measures should be considered obsolete.”