At the beginning of March, U.S. Army Armament Research, Development and Engineering Center unveiled an unusual new addition to the... 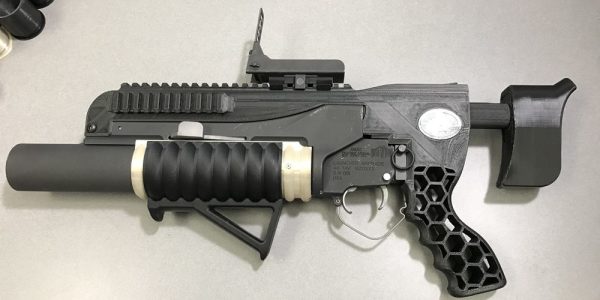 At the beginning of March, U.S. Army Armament Research, Development and Engineering Center unveiled an unusual new addition to the military’s arsenal in the form of a grenade launcher made almost exclusively from 3D-printed components — and fires 3D-printed grenades. Even better, the gearheads at ARDEC gave this fearsome weapon a name worthy of its firepower: RAMBO.

RAMBO is short for Rapid Additively Manufactured Ballistics Ordnance, a six-month long project meant to push the limits of 3D printing’s potential applications to warfare. The launcher, a modified version of the older M203, consists of 50 separate parts, almost all of them fabricated through 3D printing except for the fasteners and springs holding everything together through the additive manufacturing process that uses successive layers to produce a three-dimensional object.

The RAMBO, disassembled.Photo by DoD

Not everything on RAMBO is made from the relatively untested AM process. The most important components, obviously, weren’t left up to chance: The trigger and firing pin were printed in 4340 alloy steel, the barrel and receiver from aluminum. And let’s not forget the ammo:

An integrated product team selected the M781 40 mm training round because it is simple and does not involve any energetics—explosives, propellants and pyrotechnics are still awaiting approval for use in 3-D printing.

The M781 consists of four main parts: the windshield, the projectile body, the cartridge case and a .38-caliber cartridge case. The windshield and cartridge case are traditionally made by injection molding glass-filled nylon. Using multiple AM systems at multiple locations helped emphasize manufacturing readiness and the Army’s capability to design, fabricate, integrate and test components while meeting tolerances, requirements, and design rules.

AM-printed rounds, like this one, were fired from the 3D-printed launcher at indoor ranges and outdoor facilities to test the RAMBO.Photo by DoD

The goal, according to the Army, isn’t to quickly and cheaply replace the standard M320 Grenade Launcher Module that’s slowly supplanted the M203. “The technology demonstrator did not aim to illustrate whether the grenade launcher and munition could be made cheaper, lighter or better than traditional mass-production methods,” the Army explained. “Instead, researchers sought to determine whether AM technologies were mature enough to build an entire weapon system and the materials’ properties robust enough to create a properly functioning armament.”

So does this beast constitute a properly functioning armament? ARDEC researchers say they successfully fired a 3-D printed grenade from the RAMBO launcher during a live-fire test at Picatinny Arsenal in New Jersey. It’s only a matter of time before this potent little launcher gets properly tested on the battlefield — and we finally decide whether it lives up to its name.