Brought to you by the future. 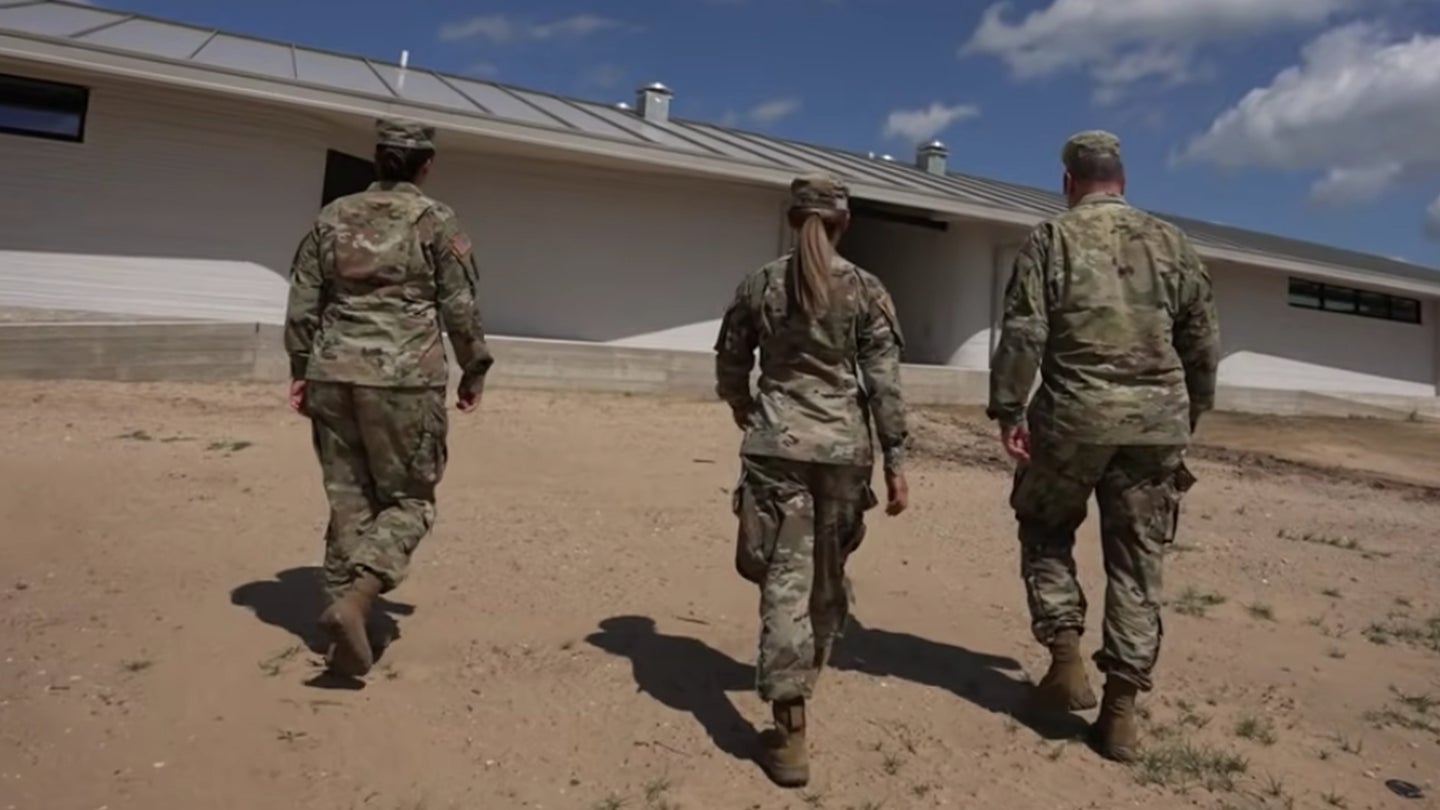 Soldiers walk up to new barracks made with 3D printing technology at the Camp Swift Training Center in Bastrop Texas in an ICON promotional video (Screenshot via YouTube/ICON).
SHARE

A few dozen Army soldiers may soon be among the first in the country to sleep in something that came out of a printer. No, we’re not talking about the belligerent one in the office corner that runs out of toner every time you need it. We’re talking about a machine that could change both military bases and the U.S. housing market by reducing costs and saving time on building places to live and work.

The machine, a 9,500-pound, 46.5-foot-wide 3D printer called Vulcan, will be used to build three, 5,700-square foot barracks at Fort Bliss, Texas within the next 10 months. If all goes well, the barracks will be the largest 3D printed buildings in the western hemisphere, according to a recent Department of Defense press release.

“Constructing facilities using this cutting-edge technology saves labor costs, reduces planning time, and increases the speed of construction of future facilities,” said Army Lt. Gen. Doug Gabram, head of Army Installation Management Command, in the release. “We are looking at other ways to use this innovative technique for rapid construction of other types of facilities beyond barracks.”

A 3D printer uses heat and pressure to shape a material, such as plastic, metal or concrete, layer by layer into a 3D object, kind of like how a soft-serve machine spits out ice cream, as CBS described it. While you may have seen a desktop-sized printer crank out toys or knick knacks, the technology has exploded over recent years to produce anything from aircraft parts to guns to human organs. Now, a company called ICON is using large-scale 3D printers to build homes fast and cheap across Texas.

How does it work? ICON sets up the Vulcan on the construction site, and, like all 3D printers, the machine’s computer follows a blueprint to build the walls layer by layer. The Vulcan spits out Lavacrete, a special kind of concrete used by ICON which the Department of Defense said can “withstand extreme weather and greatly reduce the impact of natural disasters.”

ICON has been in the news a lot recently for building the first 3D printed homes sold in America and for planning to print entire neighborhoods. The walls of the first floor of the homes were 3D printed in less than a week, according to CBS, while traditional construction was used for the foundation, roof, wiring and plumbing. Printing the walls was several times faster than it would have taken with wooden framing.

3D printing definitely saves on labor, since you don’t have to pay the Vulcan overtime. That’s a key feature, since the U.S. is facing a historic 3 million-home housing shortage and a “crisis-level” construction worker shortage, according to one housing expert. That means it could be time to send in the machines.

“We’re filling a gap,” ICON CEO Jason Ballard told CBS. One of those gaps could be housing for service members. U.S. military housing around the world both on and off-base is notorious for being filled with mold, rodents, and asbestos, and to be so poorly-maintained and hazardous that one defense secretary said the conditions were “frankly unconscionable.” Fixing those problems would require better oversight of private military housing companies, but the Department of Defense has also pledged to “replace, repair and modernize facilities” and tear down obsolete ones.

Could their replacements come from a printer? Perhaps, as both the Army and Marine Corps seem to be testing the waters of the new technology. In 2020, the Marines worked with ICON to transform a blank patch of dirt into a concrete bunker for vehicles at Camp Pendleton, California in 36 hours. In 2021, the Texas Military Department worked with ICON to 3D print a 72-soldier barracks at the Camp Swift Training Center. The 3,800-square foot building was the largest 3D-structure in North America at the time, but the upcoming Fort Bliss barracks will likely nab that record if all goes well.

Hopefully it will be worth the switch: Axios reported on Tuesday that ICON has won at least $15 million in Defense Department contracts since 2019, but ICON officials “declined to say how much the new barracks [at Fort Bliss] would cost, except that the project would be “10-30% cheaper than traditional construction.”