The pantheon of American Ninja Warrior greats includes former special operators, Ironman athletes, and seriously tough mudders. But after this... 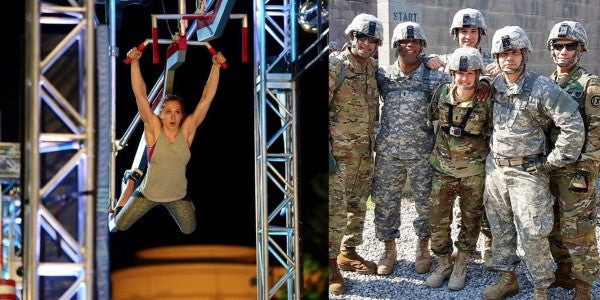 Capt. Jeri D’Aurelio, a Dallas native and active-duty soldier assigned to the 4th Infantry Division Staff Judge Advocate office, made an epic, five-obstacle dash at ANW’s harsh finals course in Denver this week — epic enough to qualify her for the national finals in her third straight year competing on the grueling show. Jump to the 28:00 mark in this video to watch the 5’2”, 115-pound hurricane hop through her backyard o-course, somersault over a shaky ANW balance obstacle, study up on her case law, and generally make you ask what the hell you’re doing with your life:

Though her finish was strong enough to place at the top of the city final and move on to nationals, she seemed disappointed to have fallen on the dreaded “rail runner” — the same obstacle that bested her in the qualifying round.

That’s pretty much the sort of modesty you get out of D’Aurelio, an avid snowboarder, rock climber, ice hockey player, mountain biker, and skydiver whose favorite day on post is, well, o-course day:

D’Aulerio will insist that she’s not special. “There are plenty of officers that crush PT in the JAG Corps,” she’s said to her followers on Instagram, adding, “I don't stand out.”

People: Don’t you believe it.

D’Aurelio first competed in American Ninja Warrior in 2015 on the series’ military-themed episode at the USS Iowa museum in San Pedro, California, going down unexpectedly on the third obstacle. (After getting the call to join the show, she’d had only three weeks to prepare for the competition.)

“Unfortunately, that wasn’t the only time I let myself down ,” she said in a video application for last season’s American Ninja Warrior. That year, the recent law-school grad also took the Texas state bar exam and missed the passing cutoff by 7 points out of 1000 — despite studying up to 12 hours a day to prepare.

Devastating? Perhaps. Debilitating? Not a chance. “All of my greatest successes have begun with a failure,” she said. She passed the bar not long after and became a full Army judge advocate. She also got the nod to compete on ANW again last season, and the next, getting farther every year.

When D’Aurelio moved to Colorado Springs recently for her posting at Fort Carson, she picked a house with a backyard big enough to fit a DIY obstacle course… and like her ambition, the course continues to grow.

But she’s also managed to work on her fitness on the job, mounting out with four other women in her JAG shop to complete the punishing 26.2-mile Bataan Memorial Death March with a 40-something-pound ruck — pausing to say hi to her old JROTC sergeant major:

The soldiers cut a video of their march, shown below (warning: It contains excessive motivation and Katy Perry lip-synching):

Of course, that’s all just a prelude to the next big ANW championship competition. “This Army JAG is about to battle this course,” D’Aulerio says.

As the show’s announcers said, watching her climb, jump, and muscle her way through Denver: “Don’t underestimate her.”