Please Do Not Fire Your Guns At Hurricane Irma

As the modern ancestor of drunken American folk hero Jigger Johnson, Florida Man’s list of accomplishments reads like the strangest... 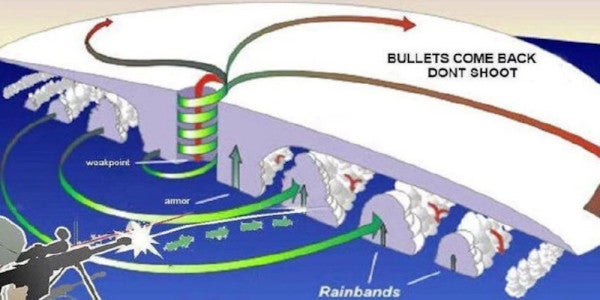 As the modern ancestor of drunken American folk hero Jigger Johnson, Florida Man’s list of accomplishments reads like the strangest police blotter in the history of drunken hijinks: beating up a swan, throwing an alligator through the window of a Wendy’s drive-thru, driving into a house while attempting to time travel, using a mixtape as an official form of identification, and launching an exploratory committee for a presidential run, among others. But one Florida resident's joke response to the imminent arrival of Hurricane Irma may capture America’s id as its finest.

Last week, out of “a combination of stress and boredom,” Florida man Ryon Edwards invited his fellow Sunshine Staters to literally “shoot at Hurricane Irma” on Sept. 10 in a goofy Facebook event invite: “YO SO THIS GOOFY LOOKING WINDY HEADASS NAMED IRMA SAID THEY PULLING UP ON US, LETS SHOW IRMA THAT WE SHOOT FIRST.”

It’s a great joke, even if “stand your ground” is no longer legal dogma in Florida, but when more than 54,000 signed up to attend the statewide shootout, local law enforcement literally had to remind Florida residents to please, for the love of God, don’t discharge your firearms in the direction of Hurricane Irma.

To clarify, DO NOT shoot weapons @ #Irma. You won't make it turn around & it will have very dangerous side effectshttps://t.co/CV4Y9OJknv

To his credit, Edwards told the Associated Press on Sept. 10 that his call to arms was clearly intended as a joke that “may have gone over many people’s heads,” adding that “I’ve got people in my inbox mad as hell because they think this is actually happening. I don’t know whether to laugh or sigh.”

To be fair, falling bullets are no joke. Out of the 284 stray-bullet shootings analyzed by University of California researchers in a 2012 study, some 5% were the result of falling shells from “celebratory gunfire” — less than other bystander gunfire incidents, but still significant given that those 284 incidents resulted in 317 deaths or injuries.

According to The Trace, this problem is particularly salient in a state like Florida, where city officials frequently beg residents to avoid celebratory gunfire on New Year’s Eve and the Fourth of July.

“I never envisioned this event becoming some kind of crazy idea larger than myself,” Edwards told BBC. “It has become something a little out of my control.”

As of Sept. 10, Edwards had updated his event with a reminder to “attendees” with a more serious call to action in the face of Hurricane Irma. “Make sure to help each other out during and after the storm in whatever way you can,” he wrote. “While the news will make countless stories about us “encouraging” people to shoot the hurricane, there will be far less coverage on how Floridians always have each other's backs in times of need.”

Okay, so Facebook isn’t actually a call to unleash a hail of lead at your local storm system, but it is chock full of great memes! The only one that’s missing — this gem from 1996’s Independence Day: