No, US service members aren’t hauling beer as part of their Hurricane Dorian relief mission

Hurricane relief work may be thirsty work, but the men and women of the United States's uniformed services aren't hauling beer alongside disaster assistance 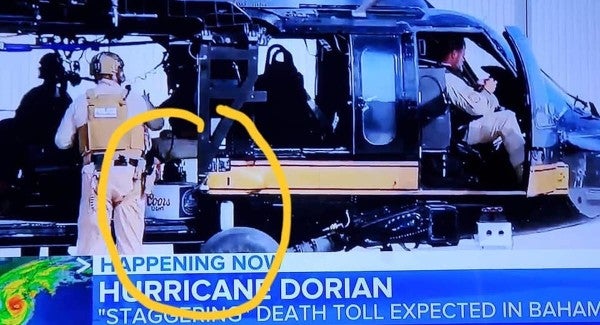 Hurricane relief work may be thirsty work, but the men and women of the United States's uniformed services aren't hauling beer alongside disaster assistance.

Last week, the Coast Guard and U.S. Customs and Border Patrol deployed six MH-60 Jayhawk and two UH-60 Black Hawk helicopters to airlift nearly 300 residents to safety as part of the U.S. military's assistance to the Bahamas in the aftermath of Hurricane Dorian.

The joint effort was focused on “life-saving and life-sustaining operations” in the immediate aftermath of Dorian, as one CBP official put it. But according to one eagle-eyed observer watching the news coverage at home, it also included at least one conspicuous-looking case of “essential supplies”:

Don't worry, though: According to the Coast Guard, that's just water. No, not Coors Light … actual water.

“It is not beer,” Petty Officer Hunter Medley, a spokesman for the Coast Guard's 7th District, told Task & Purpose. “MillerCoors sends/donates cans of water for relief efforts during hurricane and disaster responses.”

It's true! On Tuesday, Florida Gov. Ron DeSantis
announced that MillerCoors will donate 50,000 12-ounce cans of water to hurricane victims in the Bahamas in coordination with the Florida Beverage Association.

MillerCoors had
previously donated 200,000 cans of water in September 2018 to disaster-relief organizations in the Carolinas in the aftermath of Hurricane Florence. In 2017, the company donated 50,000 cans to communities hit by Hurricane Harvey.

MillerCoors and officials from CBP's 7th District did not respond to requests for comment. You can leave your “Coors-is-basically-water” jokes in the comment section below.