How The US Military Responds To A Hurricane, In Photos

As Hurricane Harvey bears down on the Texas coastline, the state government is calling in the cavalry. The Texas Division... 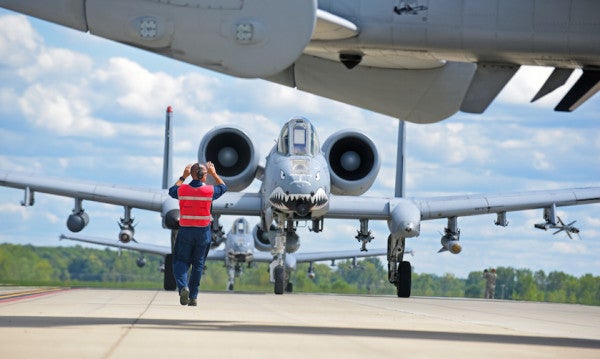 As Hurricane Harvey bears down on the Texas coastline, the state government is calling in the cavalry. The Texas Division of Emergency Management, the state government’s disaster planning and response agency, is mobilizing more than 700 members of the Texas Air and Army National Guards in addition to the Texas State Guard at Gov. Greg Abbott’s request. The Air Force Reserve has relocated several C-5 Galaxy transport aircraft to Fort Bliss from Lackland Air Force Base to avoid the path of the Category 2 hurricane, according to ABC News, active duty service members have been deployed throughout the state to assist in emergency relief.

Hurricane Harvey captures the U.S. armed forces fulfilling one of its few major domestic duties: assisting state and local authorities with natural disaster preparedness and aiding in the aftermath of major catastrophes. Depending on the severity of the event, troops may be called simply to wait on standby, deliver supplies, or even carry out rescue missions. As for hurricanes, each branch has its own functions, and Task & Purpose compiled a number of images that illustrate what some of those missions are.

Here’s how the branches spring into action when a natural disaster looms large on the horizon:

Ahead of Hurricane Harvey, airmen help to track the storm's path to better predict the kind of response will be required from the military.

Members of the active duty and Air National Guard can be called upon to evacuate aircraft to ensure they are protected from hurricane damage.

U.S. Air Force Tech. Sgt. Daniel Wayble, assigned to the 121st Maintenance Group, marshals A-10C Thunderbolt IIs during preparation for Hurricane Hermine in Columbus, Ohio, Sept. 1, 2016. Hurricane Hermine, a Category 1 hurricane, was the first hurricane to make landfall in Florida since 2005 before proceeding up the east coast of the United States.

National Guardsmen help guide a rancher as he loads bundles of hay aboard a CH-47 Chinook helicopter to deliver to stranded livestock who have been trapped by the flooded salt-waters without food or fresh water since Hurricane Ike struck the Southwest coast of Louisiana, 2008.

Prior to a hurricane making landfall, soldiers plan evacuation routes in the event of an emergency.

South Carolina National Guardsmen plan evacuation support as a part of Hurricane Matthew response efforts. Hurricane Matthew peaked as a Category 4 hurricane in the Caribbean and was projected to pass over the southeastern U.S., including the S.C. coast. Approximately 1,400 S.C. National Guard Soldiers and Airmen were activated Oct. 4, 2016, to support coastal evacuations after Governor Nikki Haley declared a State of Emergency.

In the wake of a hurricane, National Guardsmen are often called upon to assist residents, particular if the situation becomes dangerous.

The aftermath of a hurricane often leaves soldiers to work with first responders and residents to restore their towns and cities.

The Coast Guard prepares flight crews to act quickly in case of emergency, in the event that they are called on to perform rescue missions.

In the aftermath of a hurricane, the Coast Guard surveys the impacted areas.

Crewmembers from Coast Guard Station Charleston conduct a survey of Charleston harbor in the wake of Hurricane Matthew Oct. 8, 2016. Members of the media ride along to cover the operation and interview Coast Guard members.

Marines stationed nearby areas that are hit with hurricanes are trained to be on standby in the event of a catastrophe.

Lt. Col. Douglas Seich addresses Marines on current operations and destructive weather procedures aboard Marine Corps Air Station Beaufort Oct. 5. The Marines currently on MCAS Beaufort are essential personnel needed to respond to potential scenarios that could arise in anticipation of Hurricane Matthew. Seich is the commanding officer of Headquarters and Headquarters Squadron.

Marines also help to administer disaster relief in the wake of hurricanes. This can include anything from supplying medical care to food.

U.S. service members from Joint Task Force (JTF) Matthew work together to ready supplies for delivery to Haitian locals affected by Hurricane Matthew at Port-au-Prince, Haiti, Oct. 11, 2016. JTF Matthew is a U.S. Southern Command lead humanitarian assistance, disaster relief effort in Haiti following Hurricane Matthew. Matthew was a category 4 hurricane that formed in the Western Atlantic Ocean and affected Haiti, eastern Cuba, and the Bahamas before moving up the southeast coast of the United States.

The Naval Meteorology and Oceanography Command tracks hurricanes before they make landfall.

Commander, Naval Meteorology and Oceanography Command (COMNAVMETOCCOM) and Oceanographer of the Navy Rear Adm. Tim Gallaudet (right) walks w/ Maj. Jon Brady towards a WC-130J to board a Hurricane Hunters flight on May 31, 2017, over the Gulf of Mexico in support of Naval Oceanography Unmanned Systems Operational Demonstration.