Every service branch in the U.S. armed forces explicit prohibits personnel from participating in the type of extremist organizations, from... 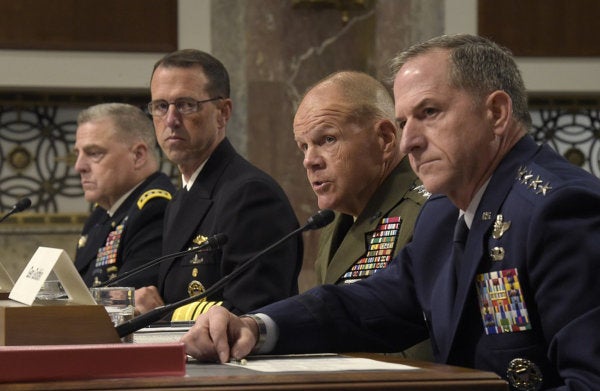 Every service branch in the U.S. armed forces explicit prohibits personnel from participating in the type of extremist organizations, from white nationalists to neo-Nazis, that marched through the streets of Charlottesville to protest the removal of a statue of Confederate Gen. Robert E. Lee. But just in case active-duty troops and veterans like hate group Vanguard America's self-described “CEO” Dillon Ulysses Hopper have picked up mixed messages amid the fallout from the violent clashes that left one dead, Pentagon leadership is here with a clear message: Knock that shit off.

On Aug. 12, hours after Army wash-out James Alex Fields plowed his car through a crowd of innocent bystanders, Chief of Naval Operations Adm. John Richardson posted a statement on Facebook declaring that the Navy would “forever stand against intolerance and hatred.”

esterday, Marine Corps Commandant Gen. Robert Neller tweeted that there is “no place for racial hatred and extremism” within the Corps.

On Aug. 16, Army Chief of Staff Gen. Mark Milley concurred with Neller, reminding soldiers of their historic charge to uphold the ideal the country was founded on.

The Army doesn't tolerate racism, extremism, or hatred in our ranks. It's against our Values and everything we've stood for since 1775.

I stand with my fellow service chiefs in saying we're always stronger together-it's who we are as #Airmen pic.twitter.com/9XxOry93nf

I stand with my fellow Joint Chiefs in condemning racism, extremism & hatred. Our diversity is our strength. #NationalGuard

It’s worth noting, of course, that Chairman of the Joint Chiefs of Staff Gen. Joe Dunford, Vice Chairman Gen. Paul J. Selva, and Coast Guard Commandant Adm. Paul Zukunft have been silent thus far about the specter of extremism, on display in Charlottesville, that may lurk in the armed forces. For Selva, well, whatever: The vice chairmanship is sort of irrelevant within the chain of command and the structure of the Joint Chiefs of Staff. And as for Dunford — maybe he has other, more pressing issues to focus on at the moment?