One of two active-duty Marines arrested in May for hanging a white nationalist banner during a Confederate Memorial Day celebration has... 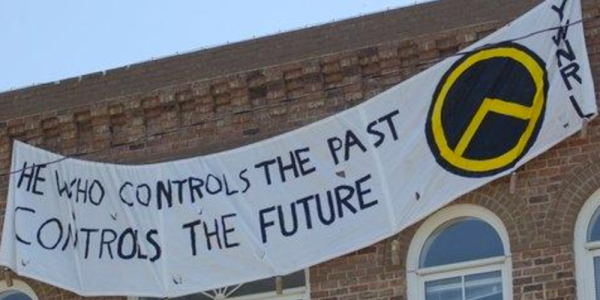 One of two active-duty Marines arrested in May for hanging a white nationalist banner during a Confederate Memorial Day celebration has been booted from the service, Marine Corps Times reported on Sept. 12 — one month after violent clashes between neo-Nazis, white supremacists, and counter-protesters at a rally in Charlottesville, Virginia, sparked worries of extremism festering within the U.S. armed forces.

Staff Sgt. Joseph Manning, of the Marine Corps Engineer School at Camp Lejeune, was charged with first-degree trespassing after unfurling a banner with the letters “YWNRU” — short for “You Will Not Replace Us,” the favorite maxim of the white nationalist group Identity Evropa established by Marine vet Nathan Damigo in 2016. Manning had mounted the flag in Graham, North Carolina, across from town’s historic courthouse during a rally by Alamance County Taking Back Alamance County, a neo-Confederate group.

Manning, a Purple Heart recipient who served in both Iraq and Afghanistan, is currently “in the process of being administratively separated,” a Training and Education Command spokesman told Marine Corps Times. Sgt. Michael Chesny, the EOD technician from Marine Corps Air Station Cherry Point who drove hours with Manning across North Carolina to participate in the stunt, has already been slapped with an administrative punishment.

Though both Manning and Chesny are set to return to Graham for adjudication in October, it’s unclear how the military’s investigation (which remains private as part of Chesny’s administrative proceedings) will shape the Marines’ appearance in civilian court.

“Once the investigation is complete, the commanding officer’s action can range from taking no action and letting the civilian authorities prosecute the case, to administrative actions such as formal admonishment, non-judicial punishment or administrative separation from the service,” an MCAS spokesman stated after the Marines’ arrests in May.

News of Manning’s separation comes almost exactly one month after a protest against the removal of a statue of Confederate Gen. Robert E. Lee in Charlottesville sparked violent clashes between counter-protesters and the neo-Nazis and white nationalists who flocked to the Virginia city to “unite the right” on Aug. 11. The clashes culminated with James Alex Fields, a one-time Army washout, allegedly running down peaceful counter-protesters with his 2005 Dodge Challenger, killing one and leaving dozens injured.

Despite his deeply unimpressive stint in the military, Fields’ part in the bloody weekend sparked national anxiety over the relationship between the military community and the rising tide of right-wing extremists. Dillon Ulysses Hopper, leader of the Vanguard America neo-Nazi hate group whose members were photographed alongside Fields in Charlottesville, served as a Marine recruiter despite publicly espousing white nationalist views; Damigo, the Marine vet and founder of Identity Evropa, had been invited to speak by the “Unite the Right” organizers.

Nathan Damigo, a former Marine and convicted felon is the founder of a white nationalist group, Identity Evropa. He is one of the organizers of a demonstration that led to racially charged violence during the weekend in Charlottesville, Virginia.Photo via Facebook

The concerns over recruiting within the ranks are not unfounded: The number of white supremacist or neo-Nazi hate groups operating in the U.S. has increased dramatically in the last two decades, and the FBI warned in a 2008 report that various far-right extremist leaders were “making a concerted effort to recruit active-duty soldiers and recent combat veterans of the wars in Iraq and Afghanistan,” adding that “those with military experience often hold positions of authority within the groups to which they belong.”

In the month since Charlottesville, the DoD has followed the example of its European counterparts in attempting to root out extremists within its ranks. DoD brass have moved quickly to remind the public that the extremist ideology on display in Charlottesville is not only antithetical to the American values, but explicitly prohibited under branch regulations, while military recruiters have been trained to recognize distinctive tattoos — lightning bolts, swastikas, hobnailed boots, and the like — that may belie a neo-Nazi ideology among potential recruits.

“The Department of Defense’s strength comes from those that serve their nation every day honorably and with distinction,” Pentagon spokesman Lt. Col. Paul Haverstick told Stars and Stripes one week after the Charlottesville clashes. “Association or participation with hate or extremist groups of any kind violates the Department of Defense’s core values of duty, integrity, ethics, honor, courage, and loyalty. We take any and all allegations of misconduct very seriously.”

The punishment of Manning and Chesny may represent the first major actions taken by the military justice system to help root out extremism after the tragedy in Charlottesville. The Corps’ decision to bounce the former for his embrace of white supremacy may indicate that the Pentagon truly is, as Haverstick said, taking the problem of extremism in the ranks seriously.