With ISIS on the ropes after losing crucial strongholds in Mosul and Raqqa, U.S. service members are turning their attention... 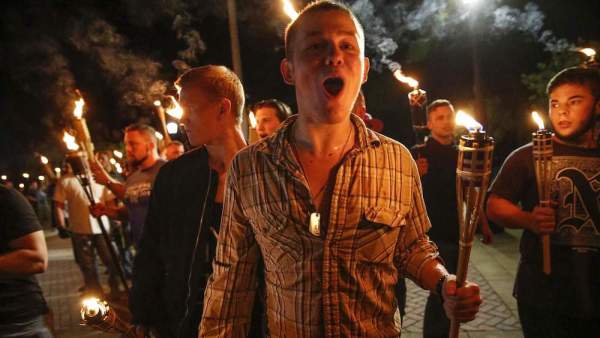 With ISIS on the ropes after losing crucial strongholds in Mosul and Raqqa, U.S. service members are turning their attention to a domestic threat they see as more dangerous than the distant battlefields of Afghanistan, Iraq, and Syria: white nationalism in the ranks.

More than 30% of service members see white nationalism as a significant threat to national security, according to a Military Times poll of 1,131 troops between Sept. 7 and 25, weeks after violent clashes at a rally in Charlottesville, Virginia, launched the specter of extremism within the armed forces into the national spotlight. By comparison, only 27% said the same about Syria, 22% for Afghanistan, and 17% for Iraq — results that suggest a fighting force increasingly wary of domestic threats to good order and discipline.

Related: You Can’t Be Both A Service Member And An Extremist »

Every branch of the military currently prohibits association with extremist organizations inconsistent with both the responsibilities of service and the principles enshrined in the U.S. Constitution. But in 2008, an FBI report found that “white supremacist leaders are making a concerted effort to recruit active-duty soldiers and recent combat veterans of the wars in Iraq and Afghanistan,” suggesting that most hardcore extremist groups “have some members with military experience, and those with military experience often hold positions of authority within the groups to which they belong.”

After revelations that several key leaders of the white supremacist and neo-Nazi groups that heightened tensions in Charlottesville were veterans (or engaged in such activity while on active duty), the Department of Defense has sought to tighten recruitment restrictions to filter out potential extremist elements. According to the Military Times poll, 60% of active-duty troops “would support activating the National Guard or reserves to handle civil unrest arising from white nationalist activities” like Charlottesville.

Most interestingly, the data suggests that the issue of white nationalism isn’t a question of racism or social justice shaped by a service member’s personal experience within the military: Yes, 42% of non-white troops said “they have personally experienced examples of white nationalism in the military” compared to just 18% of their white colleagues. But given that 76% of those polled identified themselves as white, the stark relationship between white nationalism and foreign war zones as perceived threats suggests that service members of all races and background are currently on watch for the scourge within their ranks not as a bastion of racism, but a threat to the U.S. armed forces’ mission.

“You're always concerned with what's right in front of you,” a retired Air Force colonel told Military Times. “What you saw happen in Charlottesville is right in your face. It's here in the U.S., as opposed to Pakistan or Syria.”