A Marine Corps veteran has been identified as the leader of one of the many hate groups involved in the... 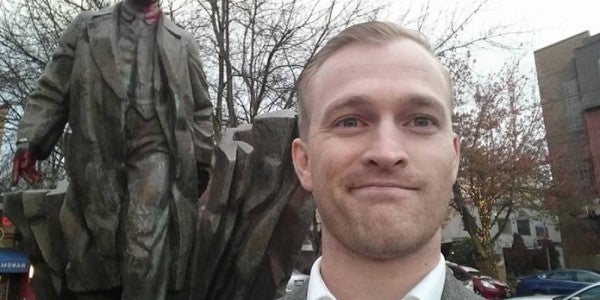 A Marine Corps veteran has been identified as the leader of one of the many hate groups involved in the violent clashes between white nationalists, neo-Nazis and counter-protesters in Charlottesville, Virginia, the second Marine and third confirmed vet directly connected to the bloody weekend that left a 32-year-old woman dead and dozens injured.

Nathan Damigo, a 31-year-old California State University Stanislaus student and founder of the white supremacist group Identity Evropa, was invited to speak by organizers of the “Unite The Right” rally protesting the removal of a statue of Confederate general Robert E. Lee, the Modesto Bee reports. Damigo first gained national notoriety for cold-cocking a woman in the face with a “Falcon punch” during a protest at U.C. Berkeley in April.

According to his military record, Damigo joined the Marine Corps in 2004, serving two tours in Iraq’s Al-Anbar Province as a light armored vehicle driver (MOS 031). While on leave after finishing his second tour in October 2007, Damigo reportedly fell into a destructive spiral of substance abuse to cope with PTSD and the loss of fellow Marines in Iraq, a spiral that led Damigo to rob a taxi driver of $43 at gunpoint for “looking Iraqi.” Slapped with an other-than-honorable discharge from the Marines, he was sentenced to six years in prison; in HBO’S 2010 PTSD documentary Wartorn 1861-2010, Damigo expressed remorse, telling CNN he “flipped out on the guy.” (He was released from prison in 2014.)

“There were a lot of demons I was facing,” Damigo told Mother Jones in April after the UC Berkeley assault. “I felt betrayed by the government.”

According to the Southern Poverty Law Center, Damigo’s time in prison launched him on the path to white nationalism and, in turn, Identity Evropa, when a fellow inmate gave him a copy of former KKK leader David Duke’s My Awakening. Founded in March 2016 and designated a hate group by the SPLC amid swelling ranks in February 2017, Identity Evropa restricts its membership to self-identified “identitarians” of “European, non-Semitic heritage.” And while Damigo claims his group “engages in peaceful, First Amendment-protected protests,” the April footage suggests otherwise.

Damigo’s ideology is a product not just of his prison stretch, but his time in the armed forces as well, according to the SPLC’s detailed timeline of his dance with white nationalism:

Contrasting his childhood with his experience in the military, Damigo recalls feeling more at ease in the predominantly white environment of his training class. Surrounded for the first time by people from similar backgrounds, Damigo describes his time in the military as important to his first steps down the road toward white nationalism, describing himself at the time as “race aware” but not “race conscious.”

This developing racial consciousness continued during his two tours in Iraq. Through a blindered focus on “tribal infighting and persecution” Damigo came to view multiculturalism as a “failed project.” In Damigo’s estimation, the solution to Iraqi domestic politics was very obvious. “This is dumb. Why don’t … each one of them have their own country and they can all express themselves and … they’re not, you know, fighting with each other,” he told The Los Angeles Times in December of 2016.

Damigo represents the third and strongest connection between the U.S. armed forces and the violence in Charlottesville. On Aug. 14, Task & Purpose confirmed reports that 29-year-old Dillon Ulysses Hopper, the “CEO” of neo-Nazi hate group Vanguard America, is veteran of the U.S. campaigns in Iraq and Afghanistan who spent three and a half years as a Marine recruiter in Ohio (though Hopper himself was not present at the Unite The Right rally, his lackeys were out in full force.) And then there’s James Alex Fields, Jr., who stands accused of murdering an anti-fascist protester after plowing his Dodge into a crowd in Charlottesville. He spent several months in the Army before washing out in December 2015 due to “a failure to meet training standards.”

The number of white nationalist, neo-Nazi and other hate groups active in the U.S. has increased dramatically in the last two decades, from 457 in 1999 to 917 in 2016 (though still down from a peak of 1,108 active hate groups during the height of Barack Obama’s presidency in 2011). In 2008, the FBI warned that various white supremacist leaders were “making a concerted effort to recruit active-duty soldiers and recent combat veterans of the wars in Iraq and Afghanistan,” with military veterans rapidly ascending into the leadership ranks of various nascent extremist groups.

Of course, every branch of U.S. armed forces explicitly bars military personnel from participating in organizations or activities that overtly reject equality under the law. To advocate “racial, gender, or ethnic hatred or intolerance … illegal discrimination based on race, color, gender, religion, or national origin, or advocate the use of or use force or violence or unlawful means to deprive individuals of their rights under the United States Constitution,” as the Army equal opportunity manual puts it, is “inconsistent with the responsibilities of military service.”

But just in case Marines like Damigo and Hopper need a reminder of what the oath they swore to the Constitution really means, Marine Corps Commandant Gen. Robert Neller is happy to provide a refresher:

CORRECTION: A sentence in this article calling the connection between military service and hate-group affiliation an alarming trending has been removed. Identifying three current or former service members with ties to hate groups is not a trend. (Updated 8/16/2017; 9:38 pm)