Two active duty U.S. Marines were arrested after hanging a white nationalist flag during a pro-Confederate Memorial Day celebration in... 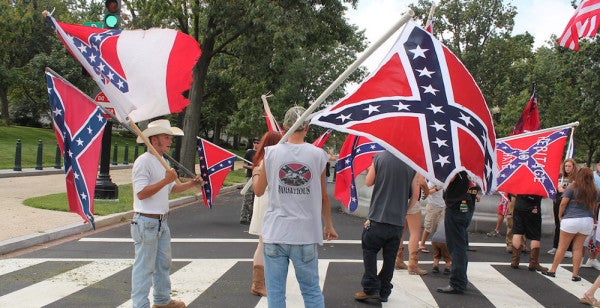 When they arrived, the men climbed to the roof of a building adjacent to the the town’s historic courthouse and unfurled what local media characterized as a white nationalist banner. The sign featured the words ““He who controls the past controls the future,” — a quote from George Orwell’s dystopian novel ‘1984’ — and the letters “YWNRU,” which stands for “you will not replace us” — a slogan associated with the white nationalist group Identity Evropa, according to Marine Corps Times.

Identity Evropa is a white nationalist activist group that been on the rise over the last years, known for plastering college campuses with white supremacist literature and using an online application which asks those interested in joining to confirm they are of “European, non-Semitic heritage.” It is unclear if the two are directly affiliated with Identity Evropa or any other white nationalist organization.

The two men were arrested by Graham police and charged with first-degree trespassing, a misdemeanor offense. The pair were released the same day from the local jail after posting $1,500 in bond and returned to their respective bases.

Public affairs officers with Chesny’s and Manning’s units who spoke to the Times-News say the incident is now under investigation by military personnel, who are awaiting more information from Graham police.

“Once the investigation is complete, the commanding officer’s action can range from taking no action and letting the civilian authorities prosecute the case, to administrative actions such as formal admonishment, non-judicial punishment or administrative separation from the service,” Mike Barton, a spokesman for MCAS Cherry Point, told Marine Corps Times.