Marine 2Lt. Felippe Maher is charged with a number of offenses for allegedly being part of a white supremacist group, lying about it, and wrongfully trying to obtain steroids 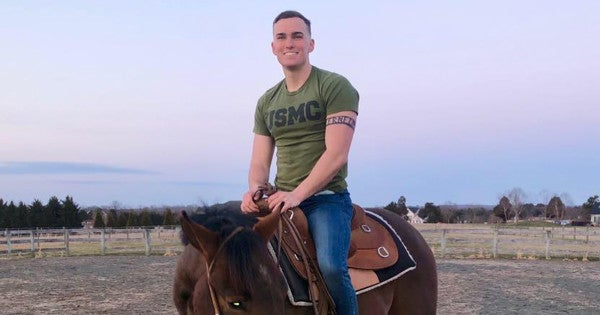 Marine 2nd Lt. Felippe Maher could face a general court-martial on charges that he was a member of a white supremacist group and then lied about it, the Marine Corps confirmed on Wednesday.

This is the first time the Marine Corps has revealed what charges Maher is facing since his Article 32 preliminary hearing in October. Corps officials first confirmed in June that Maher was under investigation for allegedly using the N-word and making other racist comments on Snapchat.

The Snapchat story was shared on social media by a Twitter user, who also posted a picture of a man who looks like Maher at a Nazi rally along with white supremacist Richard Spencer. Task & Purpose was not been able to independently confirm that Maher is the man in the picture.

Maher has been charged with violating a lawful general regulation by allegedly “knowingly and wrongfully participating in a conduct that involves actively advocating supremacist and extremist doctrine, ideology, and causes,” said Capt. Sam Stephenson, a spokesman for Marine Corps Combat Development Command.

This extremist activity allegedly took place from Sept. 8, 2018 and April 3, 2019 at or near Marine Corps Base Quantico, Virginia, Stephenson told Task & Purpose on Wednesday.

Maher is also charged for allegedly “wrongfully getting a tattoo that is affiliated with, depicting, and symbolizing extremist philosophies, organizations, or activities,” Stephenson said.

Furthermore, Maher is charged with making a false official statement for allegedly claiming, “Never have I been associated with, taken part of, currently joined with or ever will be associated with a white supremacist group,” which was completely false, Stephenson said.

Maher is also charged with conduct unbecoming an officer and a gentleman for allegedly being part of a supremacist group, Stephenson said.

Separately, Maher is charged with wrongfully trying to possess steroids.

No trial date has been set yet, Stephenson said. If convicted, Maher could face a dismissal.