Marine Forces Reserve launched an investigation after then- Pfc. Anthony Schroader sent the picture to Marine veteran Maximilian Uriarte, who is Jewish. 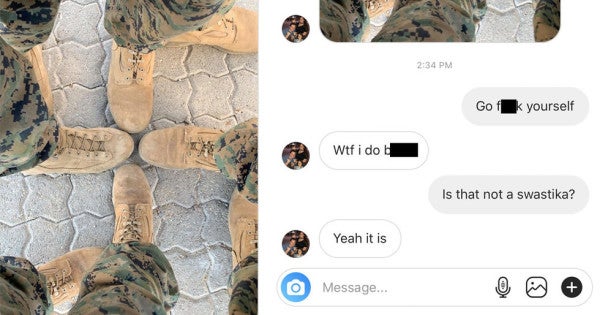 A Marine reservist has been reduced in rank to private nearly four months after sending an Instagram picture of Marines forming a swastika with their boots to “Terminal Lance” creator and Marine veteran Maximilian Uriarte, Task & Purpose has learned.

Marine Forces Reserve confirmed in April that it had launched an investigation into then-Pfc. Anthony Schroader after being alerted about the picture by Uriarte, who is Jewish.

Little information was immediately available about how Schroader's commanding officer disciplined him.

For now, Schroader is still a member of the Marine Corps Reserve, Hollenbeck said.

None of the other Marines in the picture have been disciplined because they could not be identified, Hollenbeck told Task & Purpose in June.

I dunno maybe take up a different hobby? pic.twitter.com/wKKXvu0bs9

Uriarte tweeted on Wednesday that he was not thrilled to see Schroader back in the news. He also responded to people who feel he overreacted by notifying the Marine Corps about the boot swastika picture by explaining that none of the other pictures and videos that Marines send him have been racist or anti-Semitic.

Several Marines have been separated in recent years for having ties to Nazi groups, including Vasillios Pistolis, who beat a protester with a wooden flagpole at the 2017 “Unite the Right” rally in Charlottesville, Virginia. Mason Mead, who posted pictures on social media showing him in blackface and explosives in the shape of a swastika, was also kicked out of the Corps after he admitted to “advocating supremacist ideology.”

The problem is not limited to enlisted Marines. Second Lt. Felippe Maher faces possible disciplinary action for sharing images on snapchat that showed him and others insulting African Americans on Martin Luther King Jr. Day.

A Twitter user posted a picture of a man who looks like Maher serving as a bodyguard for white supremacist Richard Spencer at a Nazi rally. Task & Purpose could not confirm that Maher is the man in the photo.