This time, the Corps is looking into "derogatory online comments" from Lance Cpl. Mason Meade, an infantry assault-man with 1st Battalion, 3rd Marines in Hawaii, after it was brought to their attention that he had tweeted in praise of Nazis and posted a picture of himself in black face. 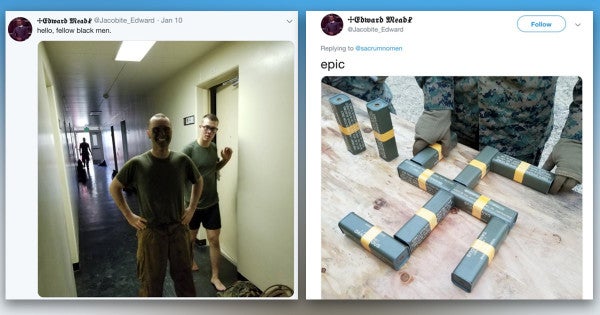 The Marine Corps is opening an investigation into another lance corporal who seems to be a big fan of Nazis.

This time, the Corps is looking into “derogatory online comments” from Lance Cpl. Mason Mead, an infantry assault-man with 1st Battalion, 3rd Marines in Hawaii, after it was brought to their attention that he had tweeted in praise of Nazis and posted a picture of himself in black face.

Mead — who wrote on his now-deactivated Twitter account, @Jacobite_Edward, that he was a 20-year-old infantryman from Alabama — is being “thoroughly investigated” by the Naval Criminal Investigative Service, according to a statement from a Corps spokesman.

Though his account has been deactivated, screenshots and cached versions of his tweets viewed by Task & Purpose show his apparent praise of Nazis and their collaborators during World War II. In one tweet, for example, Mead shared a photo of Spanish dictator General Francisco Franco and a Catholic official putting up a fascist salute, to which he remarked, “I look at this image before sleep and smile.”

Another showed a photo of German soldiers holding Catholic Mass before battle during World War II, while others were quotes and photos from Leon Degrelle, a Belgian politician who collaborated with the Nazis.

Besides praising past Nazi leaders, Mead also shared images taken while in Marine uniform, such as one of himself wearing dark camouflage face paint in which he wrote, “hello, fellow black men.” Another showed high explosives being formed into a Nazi swastika, which he wrote was “epic.”

“The Marine Corps takes every instance of misconduct seriously, whether on duty, off duty, or online. Any form of racism or discrimination undermines the core values of the Marine Corps and is not tolerated. NCIS is thoroughly investigating this situation and the command will address any misconduct at the appropriate judicial or administrative level. Due to the nature of the investigation we are unable to provide additional details at this time. We are thankful for the individuals who brought this to our attention.”

Mead is not the first alleged white supremacist to be outed among the Corps’ ranks in recent years. Lance Cpl. Vasillios Pistolis was found to be a member of a neo-Nazi group who bragged about attacking a woman at “Unite The Right” rally in Charlottesville, Virginia in 2017. He was later found guilty at court-martial, served time in the brig, and was kicked out in August 2018.

Two other Marines were arrested in May 2017 for after flying a white supremacist banner in North Carolina; both were subsequently discharged.