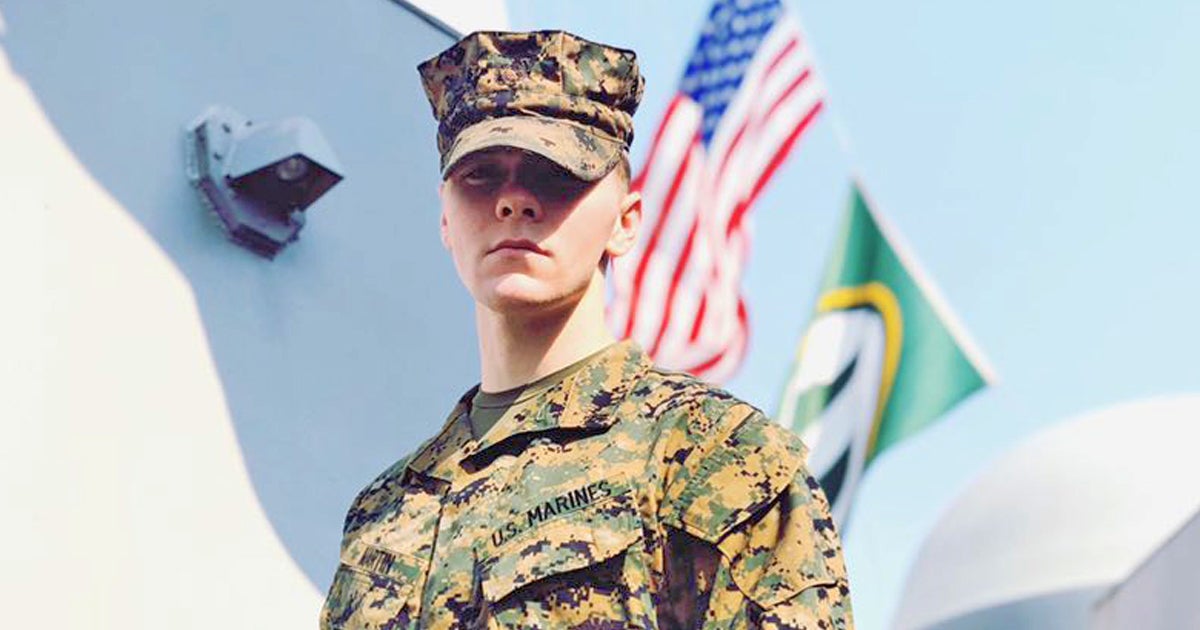 The Marine Corps has kicked out an infantryman investigated earlier this year for allegedly sharing white supremacist material, one of more than two dozen Marines to come under suspicion for ties to extremist groups in recent years.

Martin was separated on Sept. 11, 2020, although officials declined to specify the type of discharge he received, citing privacy restrictions.

“Martin’s premature discharge and rank are indicative of the fact that the character of his service was incongruent with Marine Corps’ expectations and standards,” said Yvonne Carlock, a Marine spokeswoman. “Due to the associated administrative processes, further details are not releasable.”

That isn't even the half of it. pic.twitter.com/ZcBGsJe5hK

According to reporter Andrew Dyer of the San Diego Union-Tribune, Martin posted what experts said displayed indicators of “white supremacist messaging” over a two-year period, though the 23-year-old Marine was far more subtle about it than others.

As Dyer reported in March, the material posted by Martin included a flyer with the white supremacist slogan “not stolen, conquered” over a map of the United States, which has been associated with the white nationalist group Patriot Front.

Martin also posted “stylized patriotic graphics and photo illustrations of early 20th Century nationalistic propaganda,” according to Dyer, similar to posts from those who took part in “Unite the Right,” a violent August 2017 white supremacist rally in Charlottesville, Virginia.

…the mask always slips. Martin presents as a mere “nationalist” founder of “US Nationalist Initiative.” But on IG/FB he describes getting “chills” from Hitler and daydreaming of a “future blue eyed blonde haired mistress” to “help contribute to the preservation of my lineage” pic.twitter.com/wPpU9Mf4EB

Martin founded an organization called the United States Nationalist Initiative, which its website claimed was “comprised of patriotic men and women who wish to make a difference within their country and local communities.”

The now-defunct website of the Nationalist Initiative listed Martin as chairman and Everett Corley as vice-chairman.

Corley, a former Republican candidate for the Kentucky state House, was widely condemned for appearing on a white nationalist YouTube show called “The Ethno State” in 2014, in which he said white people “should maintain our people and our culture as much as anyone else” during a discussion of the marriage of Sen. Mitch McConnell (R-Ky.), a white man, and Elaine Chao, an Asian woman.

“This racist behavior is completely despicable,” McConnell told the Courier-Journal in Sept. 2018. “Such backwards views and hateful rhetoric must be given no corner in the Republican Party or anywhere in America. I’m not at all surprised that the state party is not affiliated with or in any way supporting this individual.”

Martin did not respond to emailed questions from Task & Purpose.

Despite a number of Marine Corps orders regulating equal opportunity and how to behave on social media, dozens of Marines have been investigated over racist views or alleged ties to hate groups since 2017, according to a Task & Purpose analysis.

In May 2017, a Marine staff sergeant and sergeant were arrested after hanging a white nationalist flag from a building at a rally celebrating Confederate history in Graham, North Carolina. Both were later separated from the Marine Corps.

Since then, a handful of Marines have been revealed as members of neo-Nazi or white nationalist groups. At least one officer, 2nd Lt. Felippe Maher, is pending court-martial over ties to white supremacists after a Twitter user at Penn State University posted images from Maher’s Snapchat account apparently taken at a party marking Martin Luther King Jr. Day by eating fried chicken and watermelon.

“There is no place for racial hatred or extremism in the Marine Corps,” said Maj. Jordan Cochran, a Marine spokesman.

When asked whether the Corps kept track of members involved in hate crimes or racially-motivated incidents, Cochran said it had disposed of 19 unique cases involving “dissident and protest activities” since 2018, 14 of which had been substantiated.

“The guidance to Marines is clear: participation in supremacist or extremist organizations or activities is a violation of Department of Defense and Marine Corps orders, and will lead to mandatory processing for separation following the first substantiated incident,” Cochran said.

In an interview with Defense One in September, Marine Commandant Gen. David Berger suggested that once racism started to spread through the ranks it becomes harder to detect.

“You have to be ruthless in rooting it out, and when you find it, you’ve got to separate it like a cancer, quickly — because it clearly will spread,” Berger said. “It just starts to tear apart the fabric at the tactical level. We can’t have that.”

Earlier this year, Berger ordered all Confederate-related paraphernalia to be removed from Marine bases, reasoning that the symbol had “shown it has the power to inflame feelings of division,” which, he wrote, “I cannot have” inside the Marine Corps.

The Marines are not alone in dealing with extremism in the ranks: A 2019 Military Times poll found that 36 percent of respondents had seen evidence of white supremacist and racist ideologies among their peers in uniform, up from 22 percent the year before.

While the vast majority of military members serve honorably, the U.S. armed services have long been viewed by extremists as a fertile recruiting ground. A 2008 FBI report warned that various far-right extremist leaders were “making a concerted effort to recruit active-duty soldiers and recent combat veterans of the wars in Iraq and Afghanistan,” adding that “those with military experience often hold positions of authority within the groups to which they belong.”

And in February, a report prepared by the Anti-Defamation League suggested “serious negative consequences” for the military from the “unchecked presence of extremists in the military,” including physical harm to fellow service members, theft of military equipment, security breaches, and harm to morale and unit cohesion.

“The way extremism has evolved, it’s harder to spot,” said Emma Moore, a researcher with the Center for a New American Security, a bipartisan think tank in Washington. “While DoD policy does attempt to screen, it’s a moving target.”

“[General] Berger has worked to be out ahead of this and has been regularly on the record saying there is a huge leadership component,” said Moore. “But the Marine Corps only has so much control over a country and a president that has been increasingly permissive and even supportive of extremism groups.”

In testimony to Congress in July, the nation’s highest-ranking military officer said that divisiveness in the ranks would lead “to defeat.”

“As one of our famous presidents said, ‘a house divided does not stand,’ said Gen. Mark Milley, chairman of the Joint Chiefs of Staff. “Equality and opportunity are matters of military readiness. Not just political correctness. There is no place in our armed forces for manifestations or symbols of racism, bias, or discrimination.”