Blink three times if you're okay. 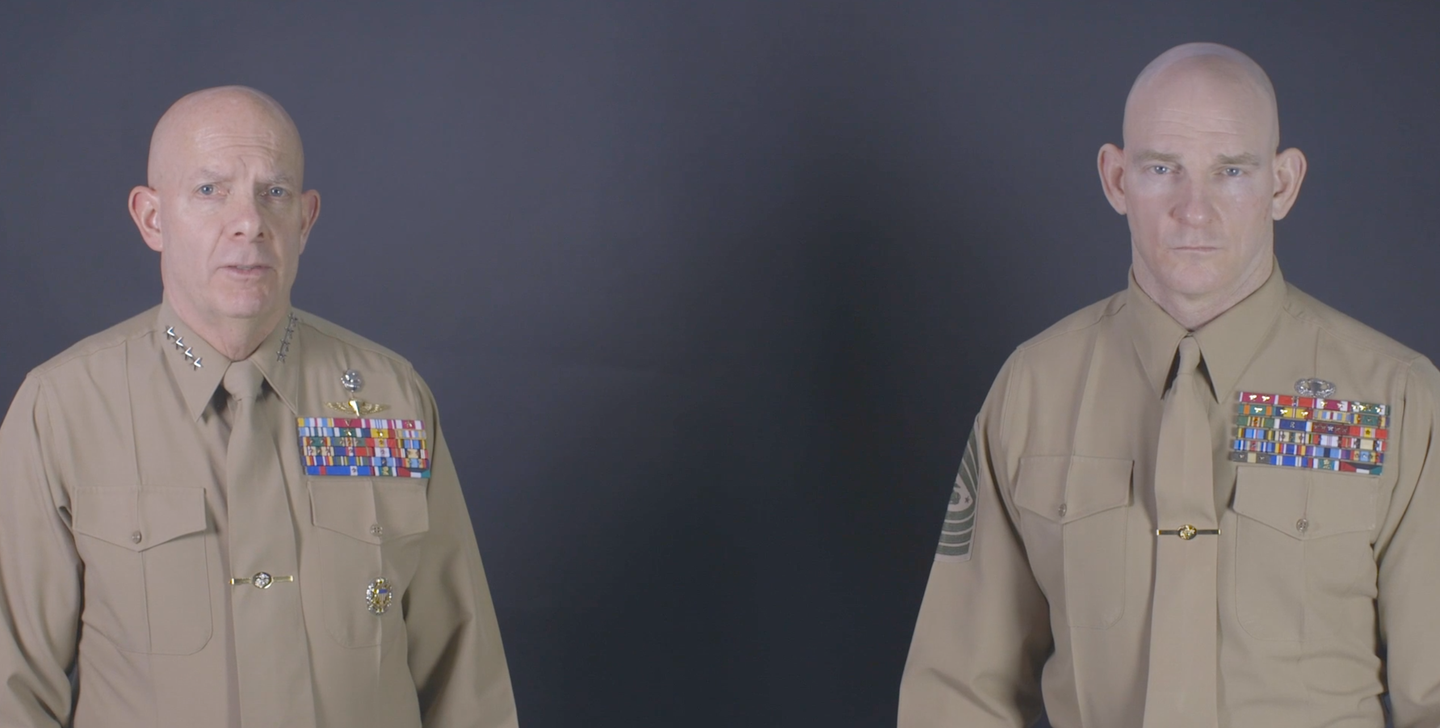 The Marine Corps’ strategy for weeding out extremists from the ranks apparently starts with a speech by two bald white guys that looks like it was filmed at an undisclosed location.

The Corps’ top leaders on Friday released a one-minute video to explain a Pentagon-directed “stand down” day intended to discuss extremism in the ranks, but it appears so forced that it has some wondering whether they are in need of a special operations rescue mission.

“It looks like they are being held captive on the Mayaguez,” said one retired Marine colonel on condition of anonymity in order to speak freely, referencing a Marine rescue operation to free hostages taken from an American container ship in 1975.

The dry, public service announcement-like video featured Marine Commandant Gen. David Berger alongside a stone-faced Sgt. Maj. of the Marine Corps Troy Black, who urged Marines to treat each other “with dignity and respect” and eliminate division among the ranks of what he called the “world’s premier fighting force.”

“Marines, the sergeant major and I would like to take a minute of your time to impress on you the importance of the training you’re about to receive,” said Berger. “This training on our oath of office and oath of enlistment is a reminder of the foundations of our profession and our democracy.”

“Never forget that it’s a privilege to serve this great nation,” said Berger. “And I expect each one of you will do so with honor, courage, and commitment.”

The video came one week after Defense Secretary Lloyd Austin issued a 13-page guide for the stand-down that offered suggested talking points, resources, and case studies for commanders to reference, including an incident of racist social media posts that led to the discharge of an active-duty Marine lance corporal and the September 2019 arrest of an Army specialist on charges he held neo-Nazi views and shared bombmaking plans online in an effort to cause “chaos.”

“The increased level of domestic protests around the country in the past several months has emboldened some violent extremist groups to take more aggressive anti-government and racially motivated actions,” reads the guide, which explained that such groups actively target current and former military service members as the FBI has warned for more than a decade.

“White supremacists encourage joining law enforcement or the military to gain access to guns and potential recruits,” said Talia Levin, a journalist who went undercover in online white supremacist forums. Additionally, extremists target Marines and other service members for their military skills, abilities and to “gain legitimacy for their cause,” according to Marine training slides.

The Pentagon document said the military had seen an “increase” in what it called “concerning behavior” in recent years, though officials were taking steps to track down and identify extremists and root them out. “That’s why we need all DoD personnel to report concerning behaviors appropriately so we can thoroughly review all credible reports,” the guide says.

A number of Marines have been booted from the Corps in recent years over racism or for ties to extremists, including Lance Cpl. Vasillios Pistolis, a member of a violent neo-Nazi group who assaulted protesters at a white supremacist march in 2018, and Lance Cpl. Thomas Cade Martin, an infantryman quietly kept in the ranks despite Marine leaders knowing he had shared extremist material last year on social media. The Corps booted Martin only after his behavior was made public by a San Diego Union-Tribune reporter.

Related: The Marine Corps is investigating a deployed machine-gunner who seems to be a Nazi fanboy