Marine Corps officials announced that Sgt. Maj. Ronald L. Green, who presently serves as the senior enlisted advisor for I... 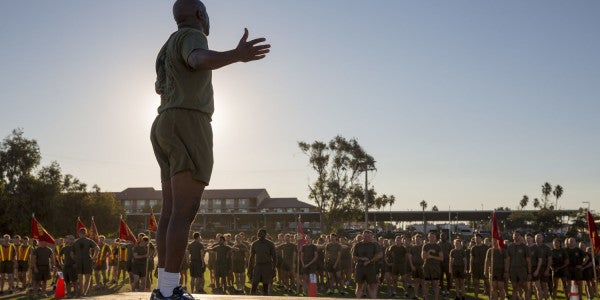 Marine Corps officials announced that Sgt. Maj. Ronald L. Green, who presently serves as the senior enlisted advisor for I Marine Expeditionary Force, will become the 18th sergeant major of the Marine Corps.

Green brings more than 30 years of diverse and dedicated service to the role. That he was selected over more senior and higher-decorated sergeants major by Commandant of the Marine Corps Gen. Joe Dunford, himself a combat decorated Marine who last served as commander of coalition forces in Afghanistan, speaks measures to his aptitude and ability to serve in his slated role.

But there's one problem, and it has to do with the stack of ribbons on Green's chest in his official Marine Corps photo. Through his 31 years of service, Green hasn't earned the combat action ribbon, the decoration the Marine Corps bestows on those troops who have engaged in direct combat with the enemy.

This shouldn't be a problem in and of itself. Awards and decorations are a recognition of achievements and experience, not a barometer of ability.

But in some corners of the Corps, there's a pestering notion that you're not a “real Marine” unless you have a combat action ribbon, which is colloquially called a CAR.

This ideal plagued recently retired Commandant Gen. James Amos, himself a distinguished fighter pilot by trade. Fanatical elements of the ground side never took Amos seriously, and mocked him for his failure to earn the ribbon.

Amos famously mocked the uproar in a Q&A; on social media last year.

One commenter asked, “Wheres (sic) your CAR? As most Marines are asking.”

“I have a 1972 VW Convertible in my garage. I bought it as a lieutenant,” Amos replied. “I’m going to drive away from the Marine Corps in it when I retire.”

Now, with Green’s recent appointment, he becomes an outlet for that cultural idea. Indeed, as soon as the Corps' official Facebook page posted the news of Green's appointment, the thread was rife with dissenting comments, based on nothing more than his absence of that ribbon.

“How's he going to get to work with no CAR?” One person quipped. Another said that he was glad he got out, now that the top rank would be held by someone without the award.

“First ribbon I always look for,” someone replied. “How can this be?”

Another man suggested that Sgt. Maj. Tim Haney, the combat-decorated enlisted leader of the Marine Corps’ staff noncommissioned officer academy on Camp Lejeune, North Carolina, would have been a better fit, and posted a photo of Haney and his decorations for comparison.

A third person went so far as to suggest that Green's appointment was indeed dangerous for the future of the Marine Corps.

These criticisms are dumb. They're shortsighted and vapid on multiple levels.

First of all, it isn’t even like Green is breaking some sort of combat glass ceiling. The 14th and 15th sergeants major of the Marine Corps, both of whom also served in their roles as the top enlisted Marine as the Corps was waging the wars in Iraq and Afghanistan, didn’t have a combat action ribbon.

That Green may have never fired his weapon in combat says nothing of his ability to advise the commandant and lead Marines. Many Marines with combat action ribbons — indeed nearly all of them — do not have the qualifications to serve as sergeant major of the Marine Corps.

Further, it's not a scalable concept. This notion that real Marines have CARs, rah, is a flash in the pan, a cultural reflection of 14 years of intense combat in Iraq and Afghanistan. But the ultimate goal of the Marine Corps is to protect America's national security. If the Marine Corps is ultimately successful in that endeavor, there could come a day when no one has a combat action ribbon. What then? Will there be no real Marines in the entire Marine Corps?

On a positive note, Green’s appointment makes it clear that Dunford doesn’t take that cultural critique seriously, and isn’t factoring it into his decision-making process.