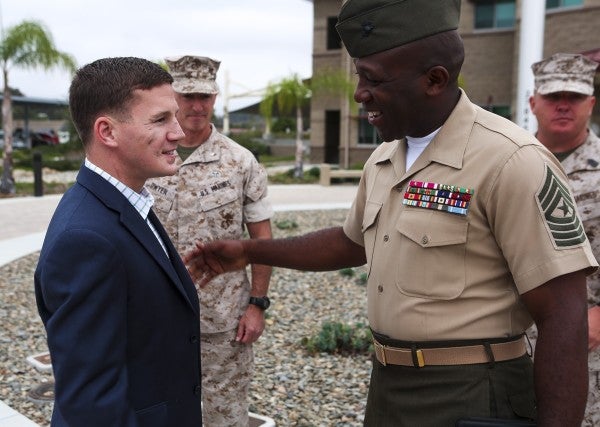 Medal of Honor recipient Marine Cpl. Kyle Carpenter paid a visit to the Pentagon today to visit Sgt. Maj. Ronald L. Green, the highest ranking enlisted Marine and a senior advisor to the commandant of the Marine Corps.

But when Carpenter entered the sergeant major’s office, Green wasn’t there. Sporting casual shorts and a “Semper Fi” T-shirt, Carpenter took advantage of his absence and stole a moment behind his desk, Carpenter’s Instagram shows:

Carpenter enlisted in the Marine Corps in 2009 before deploying to Afghanistan in 2010. His citation states he was serving as a rifleman in Helmand province, Afghanistan, in November 2010 when enemy insurgents attacked his platoon with hand grenades while Carpenter and a fellow Marine manned a rooftop.

When a grenade landed on the sandbagged position, Carpenter threw his body in the way of the blast to protect his counterpart and was severely wounded, however saving the other Marine’s life.

Carpenter’s instagram post calls Green a “great friend & even better Marine,” before admitting to his interaction with Green’s office chair.

After a long recovery and rehabilitation, Carpenter is now pursuing a degree in International Studies at the University of South Carolina.