In the final scene of Sergio Leone’s critically acclaimed spaghetti western, “The Good, the Bad, and the Ugly,” Clint Eastwood’s... 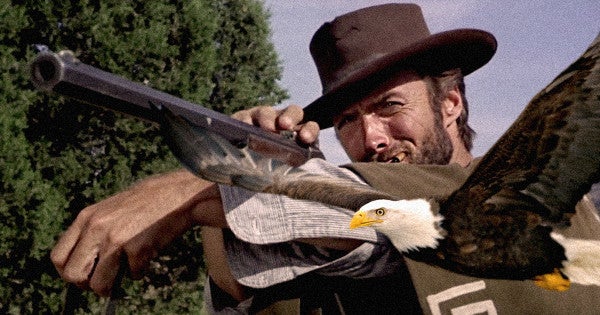 In the final scene of Sergio Leone’s critically acclaimed spaghetti western, “The Good, the Bad, and the Ugly,” Clint Eastwood’s character, Blondie, “The Good,” saves Tuco, “The Ugly,” from the hangman’s noose by severing the rope with a single rifle shot. A similar scene played out in real life last week, when an Army veteran used his sharp-shooting skills to free a bald eagle from certain death.

According to a post that appeared on the Facebook page of Jackie Gervais Galvin, her husband, Jason Galvin, spotted the eagle dangling by a few inches of rope from a tree outside of their home in Rush City, Minnesota. The bird had apparently been there for two and a half days and was presumed dead by local authorities. How it got there remains a mystery. (ISIS?)

After the authorities told him that there was nothing they could do to save the majestic creature, Galvin, a lover of freedom, decided to take matters into his own hands. After all, with July 4th only a few days away, taking up arms to liberate the national bird of the United States was his patriotic duty. So, Galvin borrowed a .22-caliber rifle with a scope from a neighbor and got to work.

In her Facebook post, Galvin’s wife claims he fired the rifle 150 times before the eagle broke free and plunged 75 feet into the woods below. None of the rounds struck the bird. The couple then wrapped the eagle in a blanket, put it in a dog kennel, and rushed it to the University of Minnesota’s Raptor Center.

“We named the eagle Freedom and hope to be able to release him near his home once he is back to health!” wrote Jackie Galvin. “What an amazing hero, my Army Veteran saving an eagle on 4th of July Weekend!”