A new trailer for the World War II film “Hacksaw Ridge” follows the story of an unlikely hero Desmond Doss,... 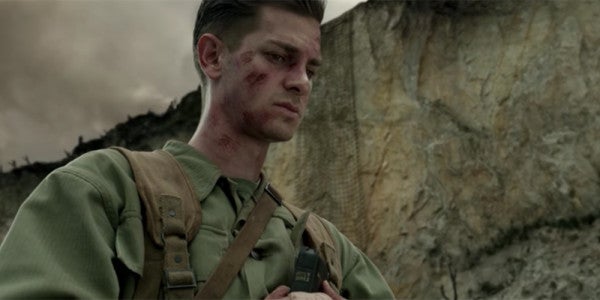 A new trailer for the World War II film “Hacksaw Ridge” follows the story of an unlikely hero Desmond Doss, a conscientious objector who served as a medic in the Army and was awarded the Medal of Honor for his incredible bravery and selflessness.

Related: Tanks, Zeppelins, Bayonets. New Battlefield 1 Trailer Has It All »

The film is directed by Mel Gibson and the trailer has the flash and action you’d expect from the creator of “Braveheart” and star of “We Were Soldiers.” In the opening scenes, bodies cartwheel through the air, and while the battlefield effects come across a bit showy, it’s the story of Desmond Doss that’s likely to be the most intriguing and compelling part of the movie. After all, here’s a man who braved hell on earth to save his fellow soldiers, and he did it without a weapon.

Played by Andrew Garfield in the film, the real Doss was a devout Seventh Day Adventist. The film seems likely to focus on his spirituality and how it meshed (or didn’t) with military life. Doss refused to carry a weapon, work or train on Saturdays, and didn’t eat meat. Even in the face of harassment from his squadmates, and his commanding officer’s attempts to get him booted from the Army, Doss stayed true to his beliefs.

The film’s title refers to a battle in Okinawa where Doss’ extraordinary acts of courage launched him from obscurity into legend. As Doss’ unit climbed a sheer ridge, they were raked by Japanese fire. Mortars, artillery, and small arms resulted in 75 casualties. In spite of the enemy attack, Doss retrieved them one by one. A few days later, he braved enemy grenade attacks, four times, to pull wounded soldiers from a cave. Over the next several days, Doss repeatedly exposed himself to enemy fire to rescue and treat his fellow soldiers, and at one point, ignored his own injuries to tend to the wounded.

Watch the trailer below.