Army Vet Arrested For Hanging US Flag Upside Down. But Did He Commit A Crime?

An Army veteran is claiming he did nothing illegal after being arrested for hanging a U.S. flag upside down on... 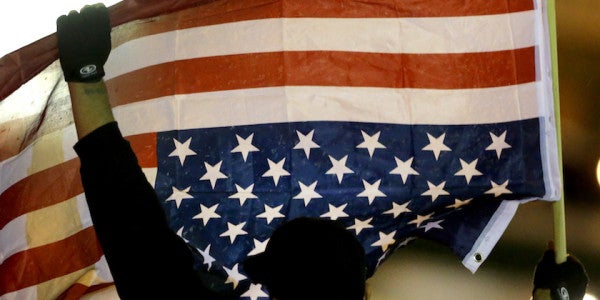 An Army veteran is claiming he did nothing illegal after being arrested for hanging a U.S. flag upside down on his property in Somers, Iowa.

According to Fox News, Homer Martz had raised the upside down flag beneath a Chinese flag to protest an oil pipeline being built without his consent next to a well that supplies water to his home.

The flags were accompanied by a homemade sign that read, “In China there is no freedom, no protesting, no due process. In Iowa? In America?”

The 1,134-mile oil pipeline Martz was protesting is being built by Texas-based Dakota Access. Once completed, the pipeline will transport approximately 470,000 barrels of domestically produced crude oil per day, and the company has been granted the right to use eminent domain to take land from landowners for its construction.

“They said, ‘You can’t do this. We have a statute,’” Martz told The Fort Dodge Messenger, referring to the moment local sheriffs arrived at his door carrying the two flags, which they removed from Martz’s flagpole. “So I walked back out and put them back up, and they arrested me.”

He added, “If they had asked me to take them down, and showed me the statute, I would have taken them down. But in my book, they trespassed by taking the flags down.”

According to Iowa code 718A, any person who attempts to “publicly mutilate, deface, defile or defy, trample upon, cast contempt upon, satirize, deride or burlesque, either by words or act,” the U.S. flag will be deemed guilty of a simple misdemeanor.

Judging by his interview with the Messenger, Martz seemed to be under the impression that his decision to hang the American flag upside down was protected by the First Amendment.

“I’m a soldier,” Martz said. “When I walked to the airport in the ‘70s with my dress uniform on, I was spit on. I stood in front of people that were protesting, and I’ve been cussed at. And like I said, that’s their rights. I’ve never infringed on their rights.”

In 1989, the Supreme Court ruled that desecrating the flag was an example of constitutionally protected free speech and that it was unconstitutional for a government — whether federal, state, or municipality — to prohibit the desecration of a flag.

It’s also important to note that hanging a flag upside down is not traditionally viewed as an act of desecration, but rather a signal of distress. This may give Martz additional ground to stand on in court.

If convicted, Martz could face a minimum sentence of 30 days behind bars in addition to a fine. However, if Martz appealed that conviction, chances are it would be overturned by a higher court.