Losing Your Sense Of Self One Suicide At A Time

Editor’s Note: This article by Gerardo Mena originally appeared on TheWarHorse.org, a nonprofit newsroom focused on the Departments of Defense... 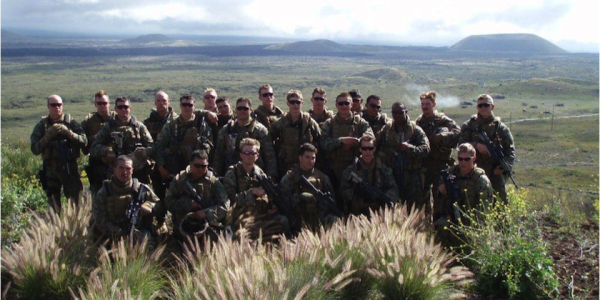 Editor’s Note: This article by Gerardo Mena originally appeared on TheWarHorse.org, a nonprofit newsroom focused on the Departments of Defense and Veterans Affairs.

It was the morning of Paul’s funeral, and John, Sean, and I sat outside our hotel in Salt Lake City waiting for Benny to roll out of bed. He’d been out late at a strip club; I hadn’t felt like going. Maybe in my younger days, maybe on a different day, but Paul had been family—as family as being in the same platoon during a war deployment could make him—and we had just road tripped for 24 hours across the country to tell him goodbye.

“I hate to ask,” Sean said, “but I know we’re all thinking it. Do you guys think he killed himself from the PTSD?” The question hung in the air. The answer wouldn’t come until much later, but that’s a story for another time.

Marines and sailors take a short nap in the Philippines prior to parachuting in on an airborne insertion in 2006. Photo courtesy of Gerardo Mena.

The first time I thought Paul had died was during our Iraq deployment in 2006. As Recon Marines we usually conducted rough, brash, violent missions. But that day we had decided on a public-relations mission and sent out a team to buy some candy at the local market to hand out. As he was throwing the loot to the Iraqi kids a sniper shot Paul. The bullet entered one leg, traveled up into his pelvis, ricocheted off the bone, and went down and out the other leg. It did major damage to his arteries, and he was a geyser of blood. John patched him up as I called in support. Paul’s skin looked waxen as John loaded him into the CASEVAC helicopter. He told John to tell his mom that he loved her. That asshole. Always a pillar of goodness.

Benny finally came out of his room, a giant grin spread across his face. He offered a high five to me and muttered, “the door girl.” I refused to return the gesture and Benny smiled as we all piled into John’s car.

“Anyone hungry?” John asked as we pulled out of the hotel parking lot and headed towards a highway that led downtown.

We all mumbled “no.” Somehow sadness is satiating.

Silence hung heavy again. So John just drove to where his gut took him. And, as usual, it took him to a gas station to buy a 30-pack of Coors. This was how we started all of our get-togethers. Everyone grabbed a beer, popped the top, and chugged as a warmup for a possible adventure. As we did we got a glimpse of a hill in the distance at the edge of the city that was reminiscent of hills we’d summitted early in our Recon Marine training. Hills that made you struggle and earn your place at the top with sweat and vomit, that demanded a large payment in the only currency that mattered to men like us: pain.

“Well, boys, let’s climb that monster. We’ll do it for Paul,” John said.

We nodded in agreement.

He pulled out of the gas station parking lot, driving into the neighborhood. As we passed suburban match-stick houses with newly tiled roofs and landscaped lawns, footpaths and freshly planted gardens, I couldn’t help but smile and think that this was what we fought for in Iraq. For most of us Recon boys, this was the backdrop of our youths.

We were such idealistic boys then, not the hardened men we are now. Damn the Iraqis and their country. Damn the terrorist groups. And damn the suburbanites back home and their parades of glitter, as if glitter could fill the holes in us or mend the gaps in our platoons when we died in the war, or now, back here, when we died at home.

Gerardo and his son lounging in their backyard following his honorable discharge from the U.S. Navy. Photo courtesy of Gerardo Mena.

After a meandering drive through the suburbs, we made it to the bottom of the hill. We grabbed our case of beer and walked the hundred meters to a small rock formation that overlooked Salt Lake City. We heard the crunch of gravel as a man walked up behind us. “This is where it all happens, huh, guys?” he said. He offered to take our picture against the Utah sky. We offered him a beer in gratitude, but he declined and disappeared back down the path.

Benny’s face scrunched up in thought. “You know when I first heard Paul died I was at the X Games. I was there to watch Dustin (also known as Turd—who was shot in Iraq on the same day as Paul) debut his new snowboarding skills with his new prosthetic leg, and he was awesome. And when he finished I looked over and saw a guy dressed in a nun outfit, and it looked just like Paul. And it’s something Paul would completely do,” he said. We laughed and nodded, because it was. “Anyway, the guy gets closer and I say Paul’s name, just to see what would happen, but he looked confused. So I tell him he looks just like my friend that just died, and the dude actually went and bought me a beer.”

Benny started to work his way to the edge of the rock formation heading toward the steep incline leading to the peak. He chugged his beer and picked up a small rock and threw it as far as he could at the city. “Fuck you!” Benny screamed at the top of his lungs, not sure whom to direct his anger toward. “I’m going to climb this hill for Paul. I bet I can make it up there in 10 minutes,” he said as he started to run.

Gerardo Mena and members of his Marine Recon platoon take a group photo during training in Hawaii. Photo courtesy of Gerardo Mena.

Six years ago when we were still in the military Benny was a machine. He could run forever and not get tired. I watched him pump his arms and legs and control his breathing just like the old days as he gained ground. But the older, civilian Benny was not quite the same machine. He made it only a hundred meters before he slowed and put his hands on his knees and began sucking air into his lungs. He walked the rest of the way as the rest of us chugged our beers and followed him, abandoning the case of beer at the rocks below.

Quickly our bodies stiffened and our muscles burned with lactic acid. I retched and everyone cheered. The pain was perfect. Like an old friend. Like we were in Recon again, where every day reminded us of how much suck and bullshit the human body could take. And I felt young again, like I wasn’t 32, and like Benny wasn’t 33, John wasn’t 39, and Sean wasn’t 44.

Benny didn’t even wait for me to finish dry-heaving before he came over and put his arm on my shoulder. “I hate this. What the war did to me. Half the time I just want something to end me. I even tried to check myself into the Houston VA. But they just redirected and redirected and gave me a phone number. I mean I had to wait three hours there and all I wanted to do was kill myself. It took everything I had to stay and try and check myself in so you guys wouldn’t have to come to another funeral. I ended up walking into the ER. That was another two hours. All I wanted to do was fucking talk to somebody. Anybody. I was so broken. What if Paul felt the same? He could’ve called. Or I should’ve called him. I should’ve fucking known.”

“I still think about that morning that Nate died a lot. I should’ve died too. I was in the fucking turret and the vehicle was on fire. It doesn’t make sense why I’m still here,” Benny said.

It was then that I opened up and told them something that I had never told anyone. That four years earlier I almost ended my life. That I couldn’t get Kyle and Nate’s faces out of my mind, etched into the black when I closed my eyes, that I had bought an extremely large kitchen knife with the sole purpose of dying by it. But my friend T.J. called and talked me out of it and got me help. T.J.’s funeral was a year later.

Gerardo Mena introduces himself and his son to their newborn daughter on November 12, 2012. Photo courtesy of Gerardo Mena.

“Jesus Christ. We’re all so fucked up,” John said. We laughed and couldn’t stop. And that’s what we always did when we were drowning in the suck. And somehow, saying it, and hearing it, and knowing that we weren’t alone in it all, and that we didn’t have to be such goddamn alpha males all the time, and that it was okay to open up every now and then, made us all feel a little bit better.

And then we heard the wind chime sound of children laughing and yelling as several of them came running up the steep hill.

Sean raised an eyebrow. “It’s time to go back and get ready for the funeral. You pussies want to take it easy and walk back down the safe side?”

“Fuck you!” we all shouted in unison as we raced down to the bottom the way we came. Leaning back to account for the steepness. Clawing at each other. Tumbling through the dirt and thorns and rocks. Pushing each other down. Anything for the win. Everything was a competition again. Bragging rights were earned. Ruthlessness was rewarded. Just the way it should be. Just the way it was.

Gerardo Mena is a decorated Iraqi Freedom veteran. He spent six years with Recon Marines as a Special Amphibious Reconnaissance Corpsman. He was awarded a Navy Achievement for Valor. He has been published in The New York Times, Poets & Writer's Magazine, and elsewhere, and has performed his work alongside Jake Gyllenhaal, Anthony Edwards, John Turturro, and others. His book of war poems, The Shape of Our Faces No Longer Matters, was published in 2014. Visit his website, gerardomena.com.