This Is Why The Best NCOs Self-Develop

In early 2015, I was reading up on military leadership and came across an interesting article by Joe Byerly, a... 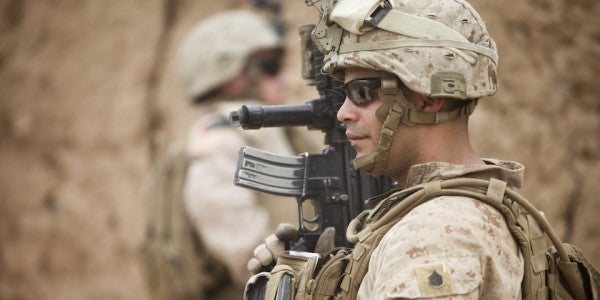 In early 2015, I was reading up on military leadership and came across an interesting article by Joe Byerly, a U.S. Army armor officer, on his personal blog, From the Green Notebook, about self-development in the military.

“Imagine if someone told you that a year from today, you would be required to take a test in which every wrong answer resulted in the loss of a human life,” Byerly wrote. “How would you approach studying for the test? Would you study for 20-30 minutes every night or would you wait until a week before the test and start cramming?”

As a senior non-commissioned officer with two deployments and countless schools and field exercises under my belt, I had assumed my military training and experience was sufficient. But Byerly’s article challenged that assumption. Even with all his training and professional development, he still felt the need to self-develop. And that made me realize that I should, too. I cannot rely on my previous deployment experiences as a predictor of future success. My next deployment will be different. I must continue to develop as a leader, because my soldiers deserve nothing less.

I’m now convinced that NCOs should not rely solely on the military for their professional development. Soldiers have little or no control over most of their training, like that which they receive in the school house or in the field, so it’s rarely tailored to individual needs. Self-development, on the other hand, is completely on the individual. According to Army Regulation 350-1, the only options for personal self-development are “college education, advanced degrees.” However, self-development requires so much more than classroom instruction.

If the Army won’t provide real direction for self-development, aside from pushing civilian education, where will today’s leaders self-develop? Well, today self-development options are more plentiful than ever. Anybody can publish a blog, video, or podcast. That’s a good thing and a bad thing. With so many possibilities, it can be difficult to know which ones are worthwhile. To save you some time, or at least to help get the gears turning, here’s a short list of advice and useful resources from my own self-development journey.

President Harry Truman once said, “Not all readers are leaders, but all leaders are readers.” Throughout my career, I’ve found that observation holds true. And I’m sure there are plenty of top-tier commanders and NCOs who would attribute their professional success to what they’ve read. Reading reveals new ideas and concepts. It also lets you learn from other people’s experiences. Every Army four-star command publishes a reading list. These lists contain ideas and concepts that senior leaders feel are important for their subordinates to know, from what future war may look like to leadership principles. If you want guidance or additional context, LTG H.R. McMaster, the current director of the Army Capabilities Integration Center, conducts an online weekly reading forum, which you can find here. If reading a book is too time-consuming, try the shorter blog route, which, of course, you’ve already discovered if you’re reading this. But Task & Purpose is just one of many military-oriented websites worthy of your attention. Here are some of my favorites:

Write about your experiences.

Written communication is critical for an NCO. Monthly counseling, evaluations, awards, emails, memorandums, and the other daily paperwork are all part of the job and impact your professional reputation. As an NCO, it’s important to ask yourself: Does your writing reflect positively or negatively on you? Like physical fitness, weapons qualification, and most other tasks, writing is a skill that requires constant practice.

To start, the Army Press has a NCO Writing Excellence Program. Each quarter brings a different question, and only NCOs can submit work. Winning writers receive a certificate of achievement and a coin, which by themselves are cool, but nothing compares to the first time you see your work published or when you receive positive reader feedback. If you don’t like the question prompts, submit to any one of the Army journals — Military Review, NCO Journal, or Armor Magazine. Or you can try submitting to one of the publications listed above. They are always looking for guest posts, especially ones written from the perspective of an NCO. And remember: The more proficient you become at professional writing, the easier those awards, counselling, and evaluations will become.

As NCOs, a civilian degree is part of our career map, even after we leave the military. However, don’t just go for the quickest and cheapest degree. Some institutions take advantage of military personnel, as John Oliver exposed on his HBO show. Run the school you’re considering through the U.S. News College Ranking, just like a prospective employer might when they’re looking at your resume. If it doesn’t show up, you may want to choose another school. Institutional reputation matters. For your undergraduate degree, apply for the Pell Grant. If tuition assistance covers everything, your grant money goes to you. Use it to pay for beer, Internet access, or save it and take more than the 16-semester hours tuition allowance covers.

Most TED talks are interesting and around 15 minutes long. They are a quick and easy way to familiarize yourself with new ideas and subject matter. For example, Stanley McChrystal’s short talk on reducing compartmentalization and information sharing in military organizations should be watched by all staffs. It’s worth 15 minutes of your time. At a minimum, you’ll learn how to conduct a brief without relying on PowerPoint. Each TED Talks presenter does use slides to support their talk, but they are not the focal point. We’ve all sat through long presentations where it would have been quicker to read the slide deck ourselves. TED Talks are the exact opposite. This is definitely a skill we, the NCO Corps, need to bring to the Army.

There are so many great discussions about leadership and warfare produced weekly. Next time you hit the treadmill or track, push play and exercise your mind while you exercise your body. Here are a few of my favorites:

All Army branches have a professional association. These associations are filled with retirees who are more than willing to share their knowledge and mentor young individuals. Join them for networking and to stay abreast of future trends. Recently, I attended my regimental association’s annual barbecue. Our current regimental command sergeant major and two previous regimentals attended, as well as many other senior NCOs. They were more than happy to provide career advice. The associations also look for article submissions for their magazines or newsletters.

The Army provides the software you need to learn a new language for free. The Defense Language Institute website has two options. One is HeadStart2, which is 100 hours of mission-focused language training. It can be installed on personal tablets. The other is GLOSS, which improves or maintains language proficiency at any level. If the language is on the Strategic Language List (CAC required), you can earn up to $500 a month in foreign language proficiency pay. $1,000 if you know two languages on the list. Aside from the money, knowing a language may just help you on your next deployment.

As our bodies become well-adjusted to the push-up, sit-up, two-mile run Army physical fitness test, we need new ways to challenge our physical limits. Combat poses physical challenges that require more than an hour of morning exercise. Every base has 5k and 10k runs. Additionally, in the United States, there are hundreds of marathons each year. If you like obstacle courses, do a Tough Mudder, Spartan Race, or Warrior Dash. Try a triathlon. Pick an event far enough in the future for you to properly train for it. Convince a friend to do so as well, so you have somebody who will keep you honest.

Conferences are excellent places to network with other military leaders, government officials, and civilians. Contacts and relationships formed can benefit both your military and post-military careers. If you joined a professional association, you probably also got a conference invitation. The Association of the United States Army conducts conferences worldwide. Other industry groups and think-tanks sponsor conferences, just look in your area. If you want to change DoD from within, look at the Defense Entrepreneurs Forum. My first experience with the Defense Entrepreneurs Forum was at their Washington, DC conference, DEFxDC. I met numerous people that assisted my self-development journey. Don Vandergriff, retired Army officer and author, invited me to a online forum discussing mission command. Through another contact, I had the opportunity to hear Ray Kimball discuss his PhD thesis on mentoring, which he later published.

Discuss your self-development with others.

With the demise of the NCO and O-Clubs, professional discussion opportunities became very limited. Find professional forums on Facebook or even use MilSuite. Talk about books, blogs, what you wrote, an interesting college course, an uninteresting college course, a TED Talk or podcast that piqued your curiosity, or the last conference you attended. Just sharing your personal self-development may get others to start their own self-development journey.