When I first learned I would attend the U.S. Army Drill Sergeant School, I was excited. Part of the instruction... 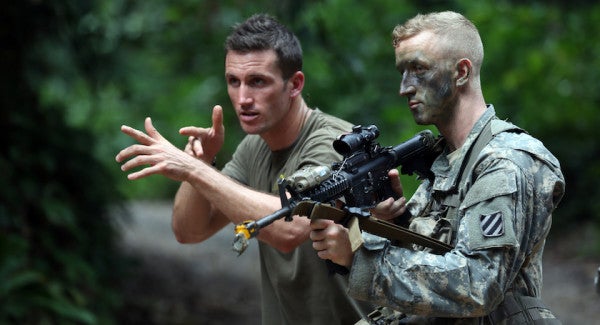 When I first learned I would attend the U.S. Army Drill Sergeant School, I was excited. Part of the instruction would include the Army Basic Instructor Course, or ABIC, an 80-hour course that trains military instructors to deliver training and education in the Army school system. I would finally learn techniques that would make me a more effective trainer. Yet, when ABIC finally started, I was disappointed. And not only because the course was lacking in material but because the NCO leading the course, whose job was to teach me how to instruct, was not much of an instructor himself. In fact, he was only reading from a binder.

In a recent interview with Army Times, the enlisted leader of the Combined Arms Center, Sgt. Maj. David Turnbull, criticized the Army’s lackluster approach to training and education, saying, “You’ve had a set , you go one through ten, and that’s how it’s covered, and that’s how you evaluate it.” In light of my experience at ABIC, that assessment is spot on. Each block of instruction contained a strict breakdown of what the instructor should say, which questions to ask, and when to stop to check whether or not we, the students, were absorbing the material — i.e., a check on learning. Even the instructional lead-in was boilerplate.

Related: Why the Army should bring back senior specialist ranks »

Public school teachers master different learning models before they enter a classroom, and then draw from each of those models to tailor the instruction in a way that best suits the syllabus and keeps the students fully engaged. That wasn’t the case in ABIC, where instructors seemed to rely on only one model — and an ineffectively rigid one at that. The result was incredibly dull instruction. And so it began to dawn on me: Anyone off the street with a basic grasp of military terminology and the ability to read could be an Army instructor. Why is that the case?

The environments soldiers find themselves in these days are, in some respects, more challenging than European world war battlefields or the deserts of Desert Storm. Our enemies hide among civilians in urban areas. Today’s NCOs may coordinate humanitarian assistance with tribal leaders in the morning, react to a complex ambush in the afternoon, and conduct resupply via sling-load in the evening. Counterinsurgency is a dangerous chess game. Still, according to the Army University White Paper, “the present Army education system, while among the best in the world, is inadequate to address the growing complexity of the 21st Century security environment.”

Critical thinking ability matters now more than ever, and the Army has begun waking up to that reality, however slowly. One recent response is curriculum changes to the NCO education system. As stipulated in Sergeant Major of the Army Daniel Dailey’s NCO 2020 plan, all NCO education systems will include written communication evaluations, and grade point averages are now on the academic evaluation report. But these incremental changes do nothing to improve education quality unless they address the most critical aspect of education: instructor quality.

It is easy to see the emphasis on instructors at the highest level — and only at the highest level — of NCO education systems: the U.S. Army Sergeants Major Academy. Select instructors receive doctorate degrees in adult education from the University of Pennsylvania. The hundreds of instructors at the NCO academies Army-wide only receive a two-week course. And they train thousands of NCOs a year. Many students, myself included, feel robbed of a great opportunity to refine our craft. My biggest takeaway from the schools I attended was the networking opportunity with classmates, not the instruction. That’s a problem — not just for me, but for the Army.

To educate a more professional cadre of NCOs, the Army should look to the civilian sector. Teachers at all civilian institutions must possess at least a bachelor’s degree. And so, to bring the Army up to speed, only NCOs with a bachelor’s degree should be allowed to serve as NCO education instructors. At 120 hours and tuition assistance covering a maximum of 16 credits a year, it is not unrealistic to expect NCOs to earn a bachelor’s degree within 10 years of enlistment. Over the course of attaining their degree, students will encounter a range of instruction styles from which they can borrow best practices. Requiring a degree will raise the bar from which instructors start.

Also, to help ensure instructors have ample time to develop their teaching abilities, assignment length should increase from 36 to 48 months, beginning with a one-year “trial period.” During the initial six months, the instructor-select would gain a graduate certificate in adult education. Several universities offer online certificates within a six-month completion period. The Kansas State Global University program requires the student to evaluate a training program, subjecting the academy and program of instruction to constant review from current education perspectives. Then, over the following six months, the instructor-select would learn the subject material covered by their academy. Before becoming a primary instructor, the academy commandant would certify the instructor-select as ready for the classroom. If deemed ready, the instructor would then serve three years before returning to an operational assignment.

Any effective system requires a method of updating itself, and the NCO education system should be no different. Currently, a civilian program is more flexible in its ability to change course material than the Army. By borrowing best practices from the civilian sector, instructor training will always remain abreast of changes in adult education theory.

When I attended senior leaders course, my coursework included one graded writing assessment, which required me to describe my leadership style. I lost points for passive voice only because I used “is” in my writing. When pressed for an explanation, my instructor could not tell me why he deducted points, but I couldn’t really blame him. He, like thousands of other Army leaders, was the product of the NCO education system. But is that level of competence good enough for future NCOs? Not if we take the job of enlisted leaders seriously. Changes to curriculum will not have desired impacts without simultaneous changes to instructor selection and instruction. Our future NCOs deserve the best education possible, and it starts with the instructor.