On Jan. 1, 2016, the U.S. Army rolled out a new Noncommissioned Officer Evaluation Report, or NCOER, to replace the... 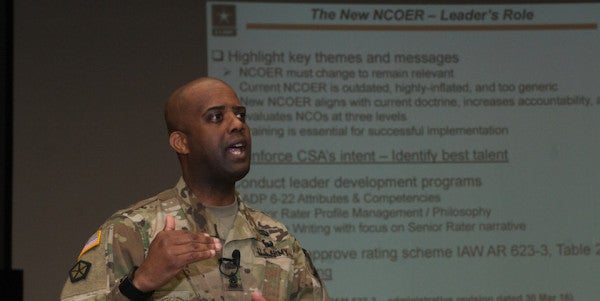 On Jan. 1, 2016, the U.S. Army rolled out a new Noncommissioned Officer Evaluation Report, or NCOER, to replace the one the service had used to rate enlisted leader performance since the late 1980s. Needless to say, it was a long-overdue upgrade. But it should have been only a first step.

The new evaluation was “designed to help better identify NCOs with the top potential, best talent, eliminate inflation, reinforce rating chain accountability and align the NCOER with current doctrine,” according to Sgt. Maj. of the Army Daley. The previous version — deemed “highly inflated and too generic” by the current head of the Army’s Evaluations, Selections and Promotions Division — was scrapped after a review found that roughly 90% of senior NCOs had been rated the “most qualified,” making it difficult to determine who should be promoted above their peers.

The changes looked good on paper. As a senior NCO who also believed the old evaluation system was deeply flawed, I figured that whatever the Army had come up with would be an improvement. But in the two years since the new system was implemented, it has become increasingly apparent that the changes were not enough. Like its predecessor, the new NCOER does not accurately measure job performance and leadership potential. And it can hardly be relied upon to assess an NCO’s eligibility for promotion. The NCO Corps deserves a lot better.

Here are nine reasons the Army needs to go back to the drawing board with NCO evals:

We all know which of our coworkers pull their own weight and which are happy to let others pull it for them. But the new NCOER doesn’t provide a space for peer input, which means there’s only one person a ratee needs to impress: their rater. It doesn’t matter if everyone else hates their guts. Ranger School has long relied upon peer evaluations to help assess leadership potential. Why doesn’t the Army as a whole?

Evaluation bullet points are no longer than a single tweet. Tweets, however, can be threaded. Bullets cannot. Each one must be a complete thought. It requires a lot of writing talent to convey the full impact and complexity of, say, planning and executing dozens of convoys through Iraq in 2004 in only 140 characters. Unless your rater is Ernest Hemingway, it’ll probably look something like this: “Successfully completed over 100 combat logistics patrols covering 3,000 miles during OIF II.”

3. NCOs are subjected to their evaluators’ limitations.

Nothing factors into promotions more than the NCOER, but no basic writing proficiency is required to be a rater or senior rater. A rater with strong writing skills can make a good NCO look great on paper. Sloppy writing, on the other hand, can make an exceptional NCO look unimpressive. The new writing requirements in NCO education might eventually help improve proficiency across the force, but a more efficient way to address this issue would be to offer courses focused specifically on bullet point writing at the brigade or battalion level.

4. Formal reviews have outlived their usefulness.

On that note: The Army is still stuck on an industrial-age annual evaluation system, but the latest research shows that, as the Society for Human Resource Management put it, “individual performance ratings have absolutely zero correlation with actual business results.” Cutting-edge private companies, such as GE, Accenture, and Microsoft, no longer use annual performance reviews. Instead, they rely on frequent informal reviews focused on nurturing individual growth rather than tallying accomplishments. The Army should follow suit. Nobody should have to wait that long to learn what their superiors really think about their job performance.

Counseling sessions used to be face-to-face and could occur anywhere. With the shift from paper to digital forms, counseling sessions have become less personal. Under the previous system, sessions were had substantive and productive conversations with my rater as we developed my evaluation together. Now I just respond via email, a medium not conducive to the types of frank and honest conversations that leads to an evaluation all parties accept.

What warrants a negative rating is clear: a DUI, a founded harassment claim, failing to complete an assigned task, and so on. Higher ratings are more subjective. For example, in many professional development sessions over my career, I’ve heard that earning the APFT badge as a sergeant 1st class nets you a high rating. But I’ve also heard that what the ratee does matters less than what their subordinates accomplish. Sergeants major enforce their own standards — and some standards are much lower than others. The rating inflations will continue until there’s one standard across the force.

Senior raters are prohibited from rating more than 24% of the individuals they senior rate as “most qualified,” the highest rating possible. A top-performing NCO may be denied the highest rating for no other reason than the 24% limit, in which case the NCOER is not an accurate reflection of their potential. Imagine winning Noncommissioned Officer of the Year and not being able to receive the highest rating from your senior rater. That is possible under the new system. Either remove the restriction or increase it to the old limit of 49%, which is far more reasonable and matches the limits on commissioned officers.

8. Evals force NCOs to tick a lot of boxes without proven results.

All evaluations must state how well the individual supported the Sexual Harassment and Assault Response and Prevention program. All evaluations include generic bullets that are variations of “supported SHARP program.” This bullet replaces an opportunity to review the NCO’s actual performance. With such limited space, every word on the NCOER counts, and generic bullets such as these do nothing to convey an NCO’s true leadership potential. The SHARP bullet should be removed.

Nowhere on the new form is a measure of the NCO’s job knowledge. NCOs are supposed to be technically proficient, but it’s hardly required as far as promotions go. Mission completion is valued more than actually being good at your job. A mechanic NCO may not know the difference between a starter and a brake drum, but if he was lucky enough to inherit a group of squared away soldiers who keep the fleet mission ready while he twiddles his thumbs, he’ll have a stellar NCOER.