While NCOs are considered the backbone of the military, the Air Force's backbone might have grown a bit too heavy in recent years. 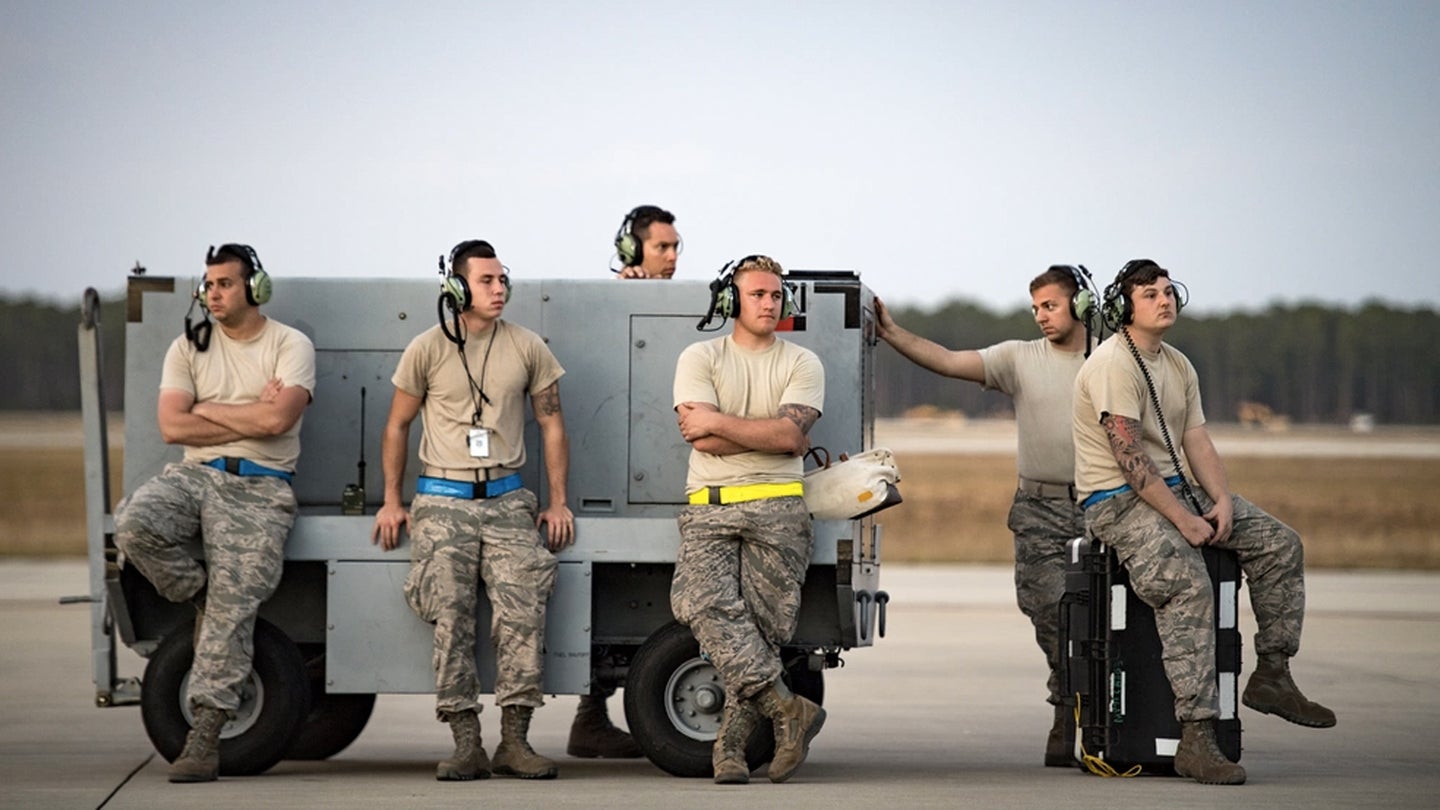 Airmen from the 71st Aircraft Maintenance Unit sit on and around a generator while waiting for a mission to kick-off during a rapid-rescue exercise, Nov. 3, 2016, at Tyndall Air Force Base, Fla. (Staff Sgt. Ryan Callaghan/U.S. Air Force).
SHARE

Airmen hoping to get promoted to staff sergeant, tech sergeant, or master sergeant may have to wait a while as the Air Force confronts record-high retention levels and an enlisted force that has too many inexperienced noncommissioned officers, the service said in an announcement on Thursday.

“Based on structure revisions and end-strength requirements, grades E-5 through E-7 will be impacted,” the Air Force wrote. “Through this realignment, the Air Force intends to balance and increase experience within its noncommissioned officer tier.”

While noncommissioned officers are often seen as the backbone of the military, the Air Force’s backbone may have grown a little too heavy in recent years. Col. James Barger, the Air Force Manpower Analysis Agency commander, said the service has been “trying to achieve an enlisted force structure with too many higher grades.” Now the force intends to slow the pipeline down so that airmen get an average of one additional year of experience at the rank of staff sergeant (E-5) and tech sergeant (E-6).

“We also found that experience levels would continue to decline unless the Air Force lays in more junior airmen allocations and fewer E5-E7 allocations,” Barger said. “So, we built a plan to transition to a healthier grade distribution by Fiscal Year 2025.”

The enlisted Air Force grew by about 16,000 airmen from 2015 to 2021 and promotion rates were also higher, the service explained. But retention levels are now “record-high” across the enlisted force, so there are not as many airmen leaving to make room for others to move up.

“Over the next several years, and as retention levels may be expected to normalize, increased promotion opportunity may be expected,” reads the announcement.

The news comes as the Air Force seeks to redesign how enlisted airmen move up through the ranks. Back in 2016, the service began eliminating time-in-grade and time-in-service points for enlisted promotion. The time-in-grade and time-in-service system meant that airmen earned promotion points for how long they held their current rank. The decision to eliminate that system received mixed reviews among airmen, some of whom worried it would allow inexperienced airmen to assume leadership roles. Barger said that a small part of the decline in experience among NCOs can be explained by the removal of time-in-grade and time-in-service points, but “the majority of the experience decline was attributable to the Air Force trying to achieve an enlisted force structure with too many higher grades.”

“The content is based solely on Unit Manpower Documents and represents aggregate guidance for Major Commands to manage their UMDs,” Heitzman said. “The percentages represent an average UMD since each MAJCOM has different grade requirements based on their unique mission sets.”

“The AF’s solution to having a technical path: you can just be a terminal [Staff Sergeant],” wrote one commenter on the unofficial Air Force subreddit.

As the Air Force works to redesign its enlisted force structure, the service is also working to revamp its enlisted promotion system through new measures such as the Enlisted Evaluation System and Airman Leadership Qualities. Announced in October, the Enlisted Evaluation System is designed to avoid punishing airmen who are high-performing but have been in the same rank for more than a year. Airman Leadership Qualities is a new tool announced in February 2021, where airmen are scored based on their ability to execute the mission, lead people, manage resources, and improve the unit.

Another change is a new component of the Weighted Airman Promotion System exam. In the past, airmen answered 100 knowledge-based questions to become NCOs, but now the test has 60 knowledge questions and 20 situational judgment test questions, the Air Force announced in December. For those questions, examinees read a description of a situation relevant to their potential rank and duties and then choose the most effective and least effective responses to the situation.

“This is another critical step in our talent management transformation, moving us away from using strictly knowledge-based questions while providing more agility in the way we measure the competency level and leadership abilities of our Airmen,” Lt. Gen. Brian Kelly, Air Force then-Deputy Chief of Staff for Manpower, Personnel and Services, said at the time.

The slower rate of promotions announced on Thursday may give the Air Force more time to adapt to its slew of new promotion systems. However, not everyone is happy with the announcement, especially given its timing well into the 2022 promotion cycle, after many airmen have already been disappointed not to move up a rank. In May, just 14.8 percent of eligible tech sergeants (E-6) were selected for promotion to master sergeant, marking the service’s lowest promotion rate for that rank since at least 2010, Air Force Magazine reported. At the time, the Air Force Personnel Center attributed the drop to “recent enlisted grade structure revision.” However, the center also pointed out that the Air Force has record-high retention rates, which means there were more eligible tech sergeants who applied, and that further drove down the percentage of those who actually made it to E-7.

The 2022 promotion trouble continued throughout June and into July, as airmen hoping to make tech sergeant (E-6) are still waiting to hear the results weeks after they were supposed to.

“It’s fucking bullshit,” the admin of Air Force amn/nco/snco, an Air Force veteran himself, told Task & Purpose about the promotion slowdown news release. “Airmen should have been told months ago.”

If the slower, more competitive promotion rates sound daunting now, the distant future may be even more so, as the military writ large considers how to attract talent into highly technical fields that pay way more in the civilian sector.

“We’ve got to remain competitive as we go after our next generation of Airmen,” said Maj. Gen. Ed Thomas, the commander of the Air Force Recruiting Service, in April when his command announced up to $50,000 bonuses for some recruits, especially those in fields like cybersecurity, special warfare, and cryptolinguistics. “While we’ve got an unmatched value proposition we also have a record-high level of competition for America’s best and brightest.”

One possible solution to attract recruits away from the civilian sector could be to allow enlistees with specific qualifications to enter the service at a higher rank. An Air Force officer named Kelly McElveny wrote for War on the Rocks on Thursday that the Air Force already does this for Air Force Band members, who can enter at the rank of E-4 (senior airman), or for enlistees with a significant amount of college credits, who can enter as high as E-3 (airman 1st class).

“This approach fixes a long-standing problem of filling manning shortfalls in specific year groups,” McElveny wrote. “While the current approach hinges on building a replacement airman from scratch and then waiting years for them to develop, this approach allows the accession of an experienced enlistee to reach a noncommissioned officer rank in much less time.”

The Marine Corps considered letting technically-skilled recruits skip boot camp, though the Commandant, Gen. David Berger, appeared to walk back that possibility in May. Still, if the proposal picks up steam in the Air Force, airmen may find the race for higher ranks even more competitive. At the end of the day, the Air Force seems to be hoping that all the airmen selected for promotion are skilled both in their career fields and at leading people.

“As we continue to improve and revise our enlisted evaluation system and grade distribution, we must ensure members are ready to both take care of their airmen and are experts in their primary duties,” said Lt. Gen. Caroline Miller, deputy chief of staff for Manpower, Personnel, and Services, said in the Air Force press release on Thursday. “Our enlisted force must be poised and structured to be able to accomplish both of those key tasks.”

Update: This article was updated after publication with additional comments from the Air Force on the slides showing NCO projections and from the admin of Air Force amn/nco/snco, an Air Force veteran.