"I lost sleep then and I lose sleep now knowing leaders can act this way." 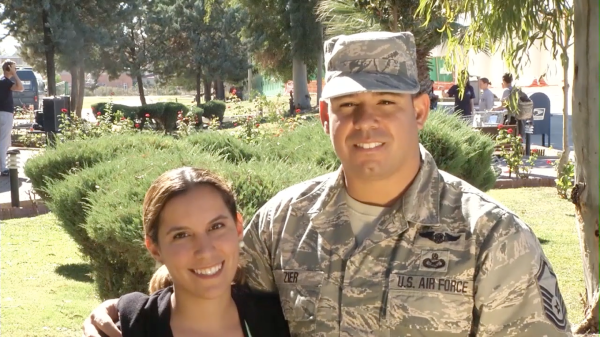 A senior Air Force non-commissioner officer convicted of abusive sexual contact and dereliction of duty was reduced one rank and will face a mandatory discharge proceeding but no jail time, the San Antonio Express-News reported on Wednesday.

As a convicted sex offender, Senior Master Sgt. Jeremy M Zier, 41, could have received one year in jail, six months’ forfeiture of pay and allowances, three months’ hard labor and reduction in rank to airman basic, the Express-News reported.

The comparatively light sentencing angered the victim of Zier’s abusive sexual contact, Staff Sgt. Cambria Ferguson, 26, who at the time of the assault was an Airman First Class at Incirlik Air Base in Turkey.

“Going through the assault followed by a year long investigation process that ended in extremely disappointing sentencing today has me angry, sad, nauseous… so many other things I'm not ready to discuss,” Ferguson wrote on her Facebook page last week.

The assault happened in 2015 at a spa in Turkey. Ferguson told the San Antonio Express-News that Zier tried several times to put his hand on her inner thigh, and finally touched her genitals, while they were in the hot tub in swimsuits along with several other junior airmen and two NCOs from her office.

Ferguson left the tub upset before Zier followed her through a courtyard “and then ended up pulling off my swimsuit top,” she told the Express-News. The young airman went back to her room, while Zier returned to the hot tub.

Several male and female subordinate airmen were also in the hot tub with Zier when he took off his swim trunks, a separate offense that the jury considered to be a dereliction of duty, the Express-News reported.

“I didn’t even know the nudity thing in the hot tub ended up happening, I guess later on,” Ferguson told the Express-News. “They kept drinking and hanging out, and eventually Zier took his swim trunks off and then was encouraging them to take off all their swimsuits.”

The jury found Zier not guilty of two other sexual abuse charges with different women in Charleston, S.C. on Dec. 7, 2019, and in San Antonio the next week. In both incidents, the women alleged that he touched their buttocks, the Express-News reported.

Related: This Air Force master sergeant claimed his unit ignored sexual assault for years. He nearly lost his career because of it

The all-officer jury was composed of three women and one man, ranging in rank from colonel to second lieutenant, the Express-News reported.

It is not clear whether Zier will receive an honorable discharge, a general discharge under honorable conditions, or an other-than-honorable-conditions discharge. That will be determined after completion of a mandatory discharge processing action, which could take several months, the Express-News estimated.

In the meantime, Zier can ask for clemency and request to be retired because he has served more than 20 years, the Express-News said.

The airman was the flying program manager for the Air Force Public Affairs Agency, which shoots photos and videos of worldwide Air Force and DoD missions.

Ferguson, who is now assigned to Joint Base Charleston, S.C., told the Express-News that Zier had a habit of saying sexually inappropriate things to airmen. Ferguson, who had recently come out as bisexual, said she received particularly specific questions.

“He would try to ask me what it’s like when two females had intercourse, what it feels like, what I like done to me, just a lot of questions relating to that,” Ferguson said, according to the Express-News. “It was always sexual in nature, and that was not only the trend with myself but other females in the office.”

Though the assault happened in 2015, it has stuck with her ever since, Ferguson wrote on her personal website.

“It wasn’t a moment or a brief chapter, it was an awakening that permeates my perception of the Air Force every day I put on the uniform,” she wrote. “I lost sleep then and I lose sleep now (as an NCO) knowing leaders can act this way because of the perception that their middle and lower ranks will turn a blind eye.”

The Express-News reported that Ferguson visited Incirlik’s sexual assault prevention office within a month of the assault, but like many sexual assault victims in the U.S. military, did not file a report out of fear that others would not support her.

Ferguson finally filed an unrestricted report last December after Air Force investigators told her that other airmen had complained of incidents involving Zier, the Express-News wrote.

“This secret is now off my conscious [sic], but I don’t feel relief,” Ferguson wrote in her blog. “Instead, I begin to face the guilt of not coming forward sooner.”

The airman expressed her irritation at being asked multiple times over the course of the investigation whether she felt Zier was still a good leader despite the ‘isolated incidents,’ she wrote.

“This question makes me angry and nauseous,” she wrote. “My answer … is emphatically no. He is not a good leader, rather, this is how he chooses to abuse his power.”