“You just showed every predator in the DoD that it is honorable to sexually harass and assault Airmen.” 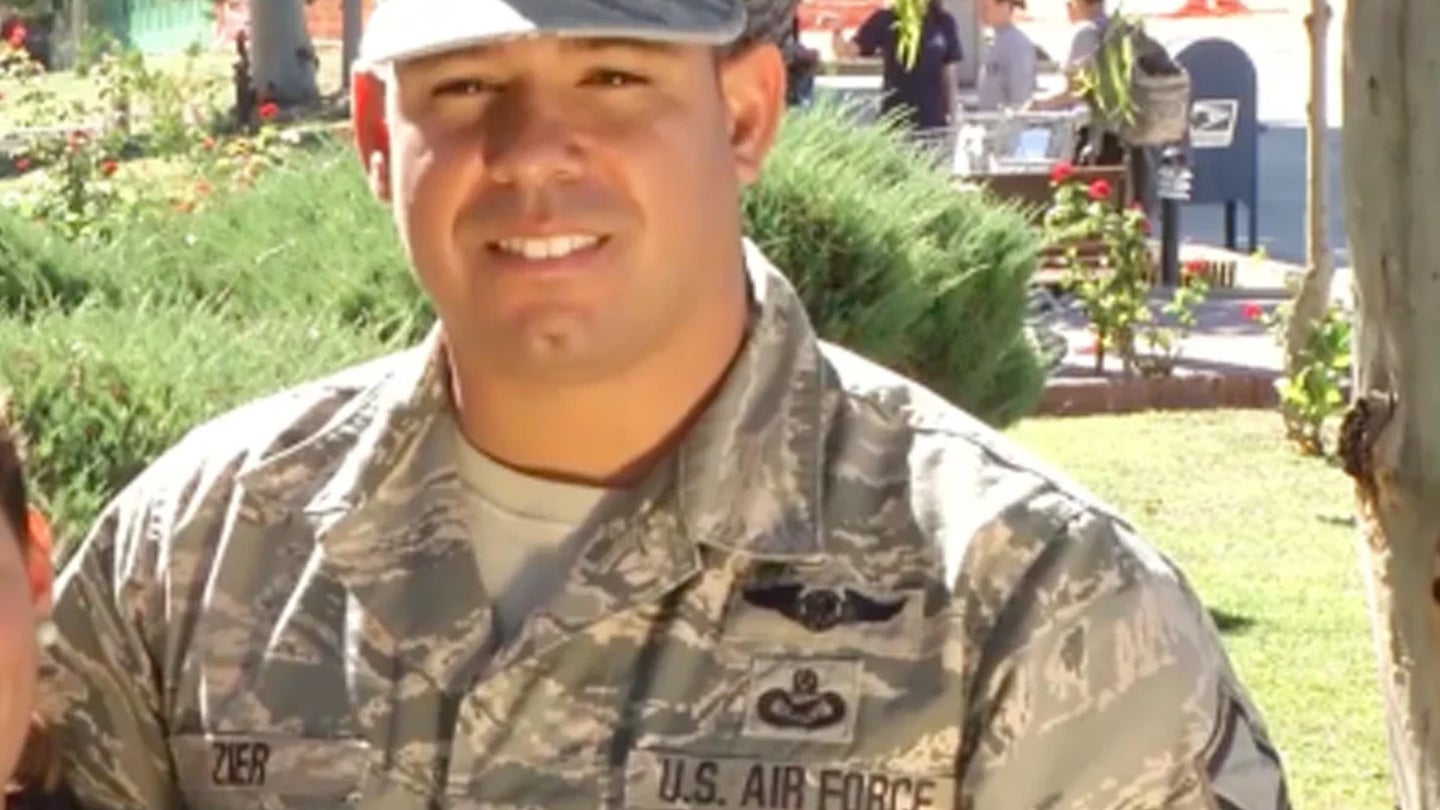 A military sexual trauma survivor blasted her branch on social media on Friday after the Secretary of the Air Force revealed that the senior enlisted airman convicted of abusing her would be allowed to retire.

“Understand this isn’t about one bad guy doing one bad thing to someone,” wrote Tech Sgt. Cambria Ferguson on Facebook. “This is EVERY PERSON in my squadron and [major command] chain of command failing to not only hold him accountable, but take care of me in any way.”

Air Force Times first reported on March 9 that Air Force Secretary Frank Kendall would allow former Senior Master Sgt. Jeremy Zier to retire. The news came about 19 months after Zier was convicted of abusive sexual contact and dereliction of duty in August 2020 after an incident at Incirlik Air Base, Turkey in 2015, when Ferguson was an airman first class.

One night during an office trip to a spa, Zier touched Ferguson inappropriately while they were in the hot tub in swimsuits along with several other junior airmen and two noncommissioned officers from her office. Ferguson left the tub upset before Zier followed her through a courtyard “and then ended up pulling off my swimsuit top,” she told the San Antonio Express-News in 2020. The young airman went back to her room, while Zier returned to the hot tub and took off his swim trunks, as several male and female subordinate airmen recalled at trial, a separate offense that the jury considered to be a dereliction of duty.

Though Zier was demoted one rank to master sergeant, he received no jail time for his conviction. In December 2020, an administrative discharge board found that a basis for mandatory discharge existed, but the board voted to retain Zier in the Air Force.

Zier remained in the Air Force despite the service’s “zero tolerance” stance on sexual assault and harassment outlined in official reports, statements and policy guidelines. In April 2021, the commander of the 502nd Air Base Wing recommended the case be sent to Kendall, who as secretary has the power under Air Force Instruction 36-3208 paragraph 1.2 to separate any airman before their term of service expires. That power extended even to airmen like Zier who are retirement eligible.

“The secretaries of the military services have the authority to discharge retirement-eligible service members not sentenced to a punitive discharge,” a Department of Defense official told Task & Purpose.

Zier requested to retire rather than be discharged in May. That meant Kendall had both Zier’s request to retire and the 502nd Air Base Wing commander’s request to discharge Zier on his desk. Before deciding which action to take, the secretary wanted to see “whether Sergeant Zier fulfilled his responsibilities as a senior noncommissioned officer in the U.S. Air Force and whether he should be demoted,” an Air Force official said at the time.

In January 2022, Zier was notified of Kendall’s question and given time to respond. Kendall considered Zier’s response, then on March 8, the secretary seemed to take a middle road by demoting Zier another rank to technical sergeant before granting his request to retire. Kendall condemned Zier’s behavior in a statement sent out to media outlets.

“As a senior non-commissioned officer, Sergeant Zier had a special responsibility and duty to protect and look after the airmen under his authority,” Kendall said. “While serving as a master sergeant, Sergeant Zier’s misconduct against a fellow airman violated that trust and his duty as an Air Force leader. Such conduct is unacceptable, does not meet Air Force standards, and won’t be tolerated.”

Kendall’s decision to demote Zier “will carry a significant loss of retirement income over the course of his lifetime,” an official told Air Force Times, adding that Zier’s retirement date was not yet set. But Ferguson was not pleased with the outcome and called Kendall a hypocrite on social media.

“SecAF Frank Kendall – you never had the courage to talk to me, but your [bald-faced] lie of ‘zero tolerance’ makes me fucking sick,” Ferguson wrote on Facebook on Friday. “You just showed every predator in the DoD that it is honorable to sexually harass and assault Airmen.”

Just eleven days earlier, on Feb. 28, Kendall and Under Secretary of the Air Force Gina Ortiz Jones penned a letter to the entire Air Force and Space Force condemning sexual assault and sexual harassment, calling them “corrosive forces that will not be tolerated in the Department of the Air Force.”

Past efforts to address those problems had “fallen short of what is required to root out these serious issues,” the service leaders wrote. In response, the Air Force now seeks to study its Sexual Assault Prevention and Response workforce to see how it can be improved; grow the number of special agents in the Office of Special Investigations who are trained to look into allegations of interpersonal violence; and connect those agents with specialized prosecutors.

“SECAF Kendall, please tell us this means you are dishonorably discharging all convicted predators,” Ferguson wrote on Facebook when the letter was released, only to learn later that Kendall was allowing Zier to retire. However, she also felt betrayed by other airmen and her chain of command.

Ferguson’s senior leaders rallied around Zier at his court-martial, Ferguson recalled to Task & Purpose in 2021. More than 25 airmen provided character references and written statements in support of Zier without seeming to have any awareness of the charges leveled against him or any account from his victims, she said.

Ferguson listed her own credentials: winner of the Commandant Award for contributions to her Airman Leadership School class; two-time Air Combat Command videographer of the year; junior enlisted service member of the year; and operations manager at the rank of senior airman. But she felt her accomplishments mattered little during or after the court-martial.

“After trial I was told to be quiet, to avoid seeking mental health care, to keep a smile on my face as I worked with people that were hostile towards me, to pretend nothing was happening,” she wrote.

Kendall’s decision to allow Zier to retire, despite having the power to discharge him, was a mistake, one Air Force legal expert said.

“His retirement request could have been denied and he could have been discharged … at the discretion of the Secretary, who chose here not to support victims but instead chose to support a convicted criminal,” said retired Lt. Col Rachel VanLandingham, a former Air Force judge advocate and law professor at Southwestern Law School. “Disgusting to be honest.”

The real consequence of allowing Zier to retire rather than be discharged is the retirement money the airman will collect after leaving the service. Though Zier’s retirement pay as a tech sergeant is considerably less than what he would have received as a senior master sergeant or even as a master sergeant, he still will be collecting a retirement check from the government every month despite having assaulted an airman under his charge.

“If the Secretary really condemned such crimes he would have denied this convict his military pension,” VanLandingham said. “A strong deterrent message is needed and this decision sure didn’t send one.”

Still, the lawyer acknowledged that the court-martial panel, the military equivalent of a jury, was also responsible for Zier’s seemingly light punishment. In fact, the new defense budget, the 2022 National Defense Authorization Act, includes provisions to remove sentencing authority from panels.

“To be fair, the court-martial panel didn’t choose [administrative separation] as punishment, but panels are notoriously terrible at adjudicating sentences, which is why the new NDAA removes sentencing from the panel,” VanLandingham said. “They made a mistake here and so did the Secretary.”

Indeed, Kendall himself referred to some of the incoming changes in his Feb. 28 letter to the Air Force. NDAA 2022 requires an independent Office of the Special Trial Counsel “to oversee the investigation and prosecution of certain offenses, such as murder, sexual assault and domestic violence,” Kendall wrote.

The legislation marks a significant break from decades of military justice practice by removing commanders from the decision to prosecute suspected offenders and putting it in the hands of independent military prosecutors. Retired Col. Don Christensen, the former chief prosecutor of the Air Force, said such changes may prevent cases like Zier’s and those of many other convicted military sex offenders from turning out a similar way.

“While the results of this case are disappointing and frustrating, Zier’s sentence was one of many examples that lead to Congress reforming the military’s sentencing system in December,” said Christensen, who is now president of Protect Our Defenders, an advocacy group for military sexual assault and harassment victims. “Sentences will now be imposed by judges using sentencing guidelines. Hopefully, cases such as his will soon be a relic of the past.”

The new defense budget requires the Office of the Special Trial Counsel be established by December 2023. Unfortunately, it’s too late to repair the damage Ferguson felt was done to her by allowing Zier to retire.

“Airmen, you deserve so much more than this,” Ferguson wrote on Facebook. “We are disposable to [Air Force Public Affairs Agency]. We are nothing more than bodies to objectify and fill manning slots – and we aren’t allowed to be uncomfortable with that.”

For his part, Brig. Gen. Patrick Ryder, the director of the Air Force Public Affairs Agency, expressed sympathy for Ferguson in a memo sent out to his airmen.

“Cambria was violated by one of our own and had the courage to report it,” Ryder wrote in the memo, which was shared to the popular Facebook page Air Force amn/nco/snco on Monday. “We owe it to her to support her and other survivors that are brave enough to step forward.”