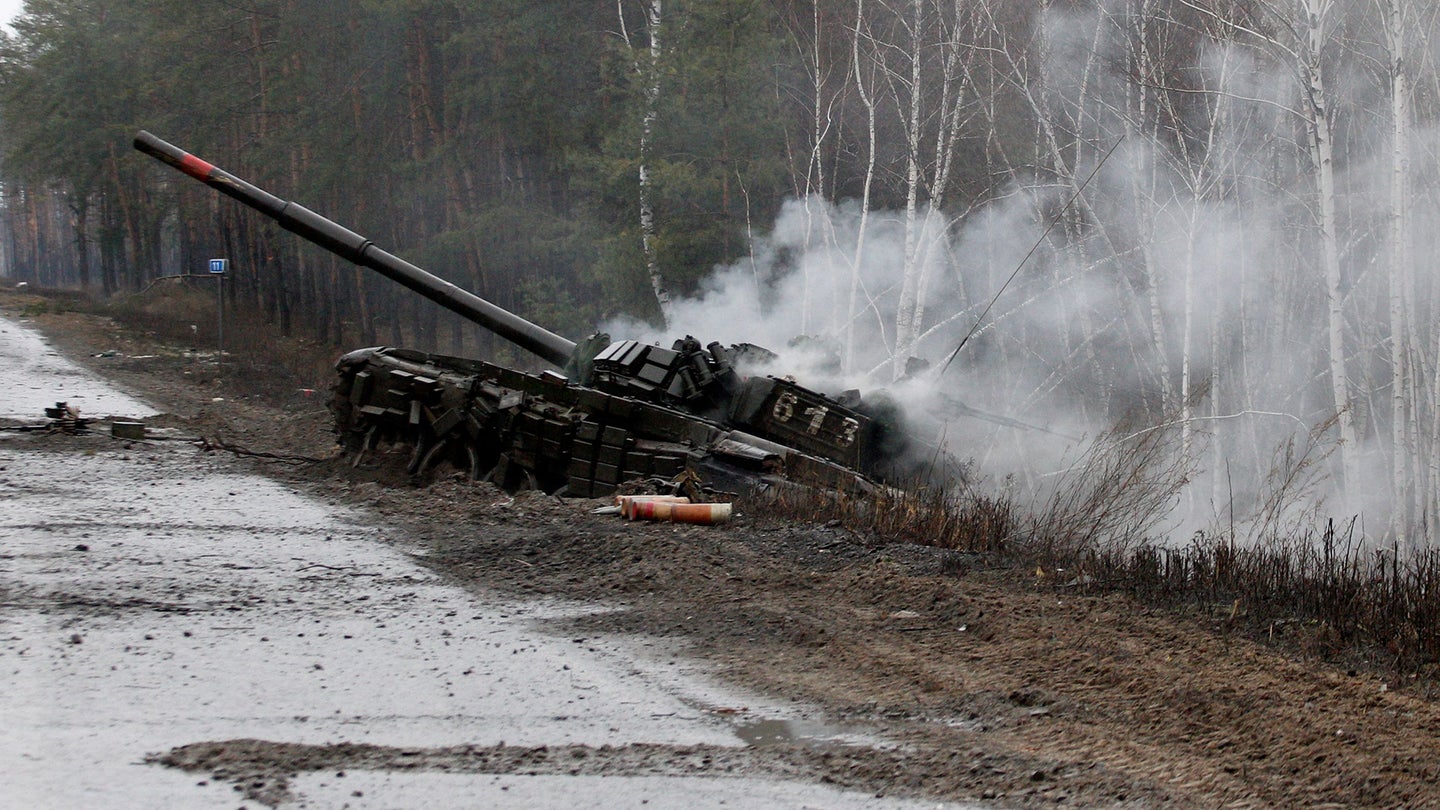 Smoke rises from a Russian tank destroyed by the Ukrainian forces on the side of a road in Lugansk region on February 26, 2022. (Photo by Anatolii Stepanov/AFP via Getty Images).
SHARE

I served 24 years as a Special Operations Officer in the United States Marine Corps. This article is based upon factual research and my own perspective after conducting Special Operations missions around the world, to include detailed studies of potential adversaries.

On Feb. 24, Russian President Vladimir Putin ordered the invasion of Ukraine by Russia, ostensibly to rescue it from Western interlopers. The invasion isn’t just about politics and a redesignation of former Soviet States to once again redraw European borders. Ukraine is materially rich in natural resources and Russia wants to control these along with access to them. It is an economic move as well as a political one via military means.

Russia doesn’t wage war elegantly. Their military is ponderous and heavy-handed with support and emphasis being placed on the unit making the best progress. Two weeks after invading, Russia’s war to date is characterized by stalled progress; a demonstrated lack of logistics; a fractured advance; and strong Ukrainian resistance.

This article provides an analysis of Russia’s invasion of Ukraine through the U.S. military’s three Warfighting Factors (time, space, and force); and the six Warfighting Functions (command and control; intelligence; fire support; movement and maneuver; sustainment; and force protection).

Russia expected a quick fight followed by a swift capitulation of the Ukrainian government due to their reputation as a European bully. Reputation doesn’t win wars. Fighting hard, quickly, and to win, does. Russia has ignored this and has resorted to attacks on civilians in an effort to break Ukrainian national resolve. This will undoubtedly lead to resentment on behalf of the occupied if Russia conquered Ukraine. A cycle of reprisals may ensue with horrifying results as witnessed during the Yugoslav civil war of the early 1990s.

Ukraine is about the size of Texas, bordered by Russia to the east and a Pro-Putin, Russian vassal state of Belarus to the north. The country should have been taken in a matter of days with a mutually supporting and multi-faceted attack from the air, sea, and land aimed at crippling Ukrainian infrastructure. This has not happened.

Russia did not establish amphibious superiority through command of SLOC (sea lines of communication) by dominating the Black Sea and Bosporus Strait. Russia must own amphibious access to Ukraine. They also do not have air superiority due to the tenacity of Ukrainian forces defending their own turf.

There are parallels to Russia’s 1979 invasion of Afghanistan. Like that military debacle, Russia has approached war with Ukraine with too few of the right kinds of troops and is relying upon the wrong ones without a coherent strategy. Russia invaded Afghanistan to shore up its borders in the wake of Iranian unrest. They moved in with motorized troop formations and did utilize its Airborne and Special Operations to their fullest extent.

Ahead of any action, Russia did not conduct effective, nor widespread cyber warfare against Ukrainian communications architecture, particularly, internet, radar, and early warning networks.

Leadership matters on both sides. Vladimir Putin is increasingly distanced from his advisors and generals. By contrast, President Zelensky has cultivated a reputation as a leader who works tirelessly to maintain Ukrainian patriotic solidarity by leading from the front. He regularly addresses his countrymen with strength and resolve. Though fighting a difficult campaign, he refuses to waver in the face of adversity.

Ukrainian units are empowered to work at the lowest levels to engage Russian forces. That decentralization allows for swift action by the Ukrainians to blunt Russian advances. The top-heavy command and control that characterizes the Russian military hinders their decision-making at the lowest levels where small unit leadership is paramount.

Russia does not appear to show evidence of conducting in-depth intelligence estimates of the enemy or any operational preparation of the environment or battlespace. If they have, their focus appears to have been on various small force locations and not on significantly degrading Ukraine’s ability to mount a spirited resistance.

Westphalian notions of seizing capital cities to bring down a nation are anachronistic. The cities in Ukraine are not as important as the infrastructure required to supply and keep them operating. A campaign of isolation and bypass of these urban combat nightmares would allow the Russians to starve out their adversaries and reduce costly incursions in urban environments as the Russians failed to learn in Chechnya. Currently, Russian advances across Ukraine are not aligned nor mutually supporting as they wage a war of attrition. The Ukrainian resistance to Russian might is impressive.

Many Russian units are running short on fuel and ammunition. A forty-mile convoy on single-lane roads is a combined arms engagement dream. I can only imagine artillery instructors at Fort Sill, where the U.S. military trains its artillery forces rolling their sleeves with glee to set up sand table training, never mind free and open engagement areas for aerial-delivered munitions from platforms like the A-10 Warthog, which would be well-suited to striking a long-sprawling convoy.

Because Russian forces are stretched across a vast area, that makes force protection difficult, too. They underestimated how long their resupply routes would be and how long it would take to keep their units in the fight.

Russia has much heavier weapons it can bring to bear, but will it? They might. Russia’s military, under Putin, has no problem with targeting civilians and has employed chemical weapons in the past against civilian targets, including the Syrian Kurds, the Afghans, and other Syrian Rebels.  One prominent example is the use of Chlorine gas against Syrian rebels in Umm Hawsh in September 2016, as well as Afghans against whom mustard gas and cyanide were used in the 1980s with dubious effects.

Up until now, most Russian fire support has taken the form of missiles and air-delivered bombs, often indiscriminately. This could quickly change based upon the fluid nature of the war and Putin’s reaction to the world’s sanctions against Russia.

The world changed as a result of the Russian attack on Ukraine. Western powers are doing all they can short of military intervention to support the Ukrainian government and make it nearly impossible for Russia to thrive as a nation.

However, while economic and cyber sanctions can be immediately brought to bear it may be too little, too late. Sanctions take time — Iran has defied US sanctions for 50 years. North Korea remains unfazed by internationally imposed sanctions. Cuba and Fidel Castro outlasted eight  U.S. Presidential administrations. The average person in these countries doesn’t know any different. The poor stay poor and the rich remain so, or they get even richer. The Russian people will not suffer so much as endure.

Further, the refugee crisis in Poland will expand as they accept fleeing Ukrainian civilian populations. It is hard for any country to absorb nearly 2 million people in a reasonable manner without support. The U.S. is leading these efforts through USAID and other humanitarian assistance organizations. This emerging crisis will undoubtedly affect Polish resolve to want a swift end to the war. In the main, Russia is only sowing the seeds for further insurgents with each passing day.

Even if Russia’s invasion is successful, they will create an environment ripe for a proxy war by outside entities, and then they will have to deal with an insurgency that will unquestionably enjoy Western support. I will not speculate as to how exactly that will occur, but the Russians are terrible at counter-insurgency as evidenced by their performance in Afghanistan which led to their withdrawal in 1989 after a decade of trying to subdue that country.

This is also a watershed moment for NATO. From Germany upping their defense spending, to new states seeking inclusion in the future, Europe may finally take defense spending as seriously as the U.S. has, and other nations like Moldova anticipate another Russian incursion into a sovereign state.

For now, the war continues. Putin sits on the second-largest stockpile of nuclear weapons behind the United States.  Western efforts to oppose Putin must be carefully calculated.

Ivan F. Ingraham is a retired Marine Corps Officer. He served 24-years as a Special Operations Officer, serving worldwide in conflict zones on three continents. This is his second submission to Task & Purpose. His first can be read here.