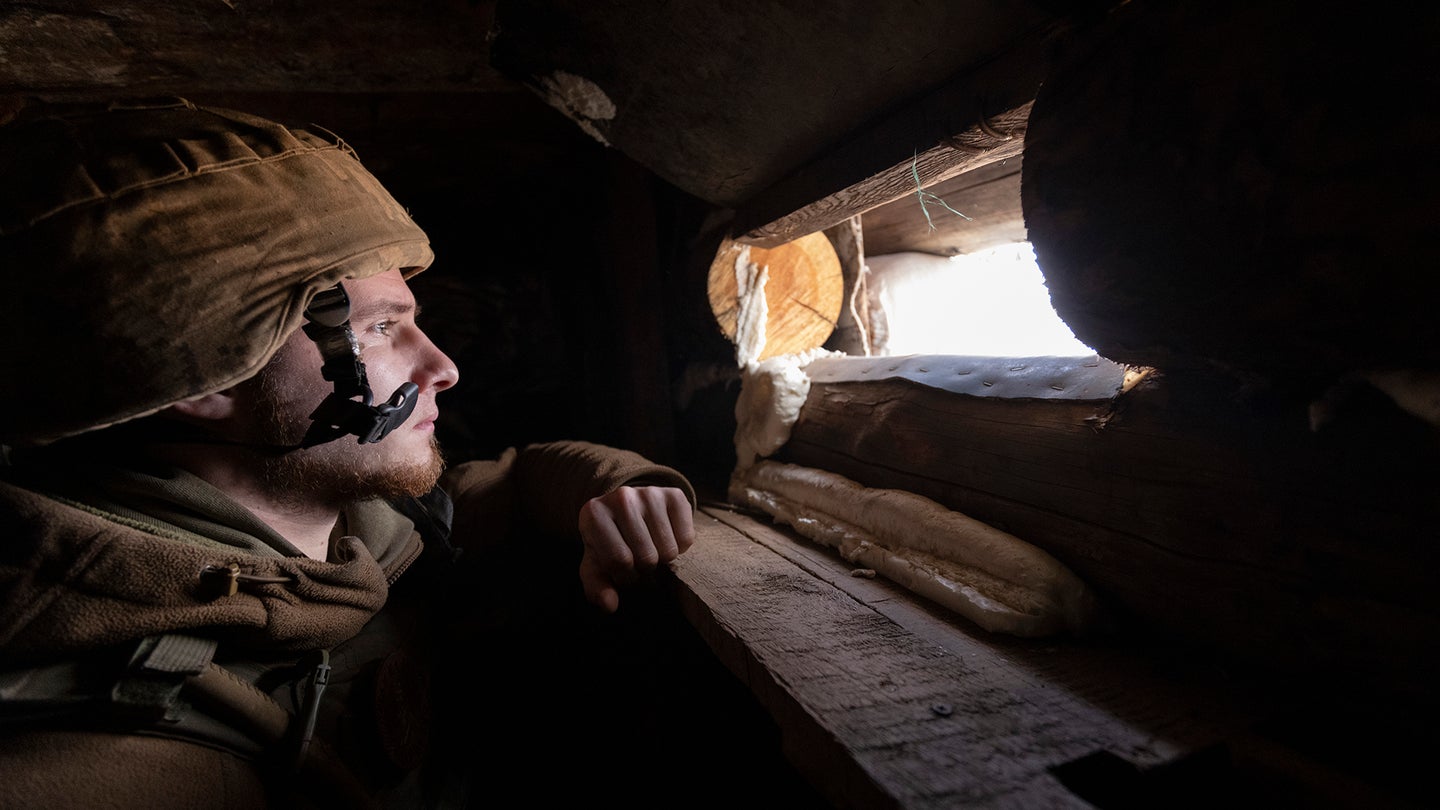 A Ukrainian marine looks on at a fighting position on the line of separation from pro-Russian rebels, Donetsk region, Ukraine, Friday, Jan. 7, 2022. President Joe Biden has warned Russia's Vladimir Putin that the U.S. could impose new sanctions against Russia if it takes further military action against Ukraine. (AP Photo/Andriy Dubchak).
SHARE

Russian President Vladimir Putin on Monday ordered his forces to deploy to two separatist areas of Ukraine as a “peacekeeping” measure following a weekslong effort to mass hundreds of thousands of soldiers along Ukraine’s borders.

According to The Washington Post, Russian troops are now moving into both the “Donetsk People’s Republic” and the “Luhansk People’s Republic” after Moscow recognized their independence. Despite the Kremlin’s insistence that its forces were on a “peacekeeping” mission, the troop movements into Ukraine’s borders come after weeks of speculation and concern over a pending invasion.

The White House said it “anticipated a move like this from Russia” and announced new sanctions and other measures “related to today’s blatant violation of Russia’s international commitments.” During a recent interview with NBC News’ Lester Holt, President Joe Biden warned that any conflict between the United States and Russia could escalate into a “world war.”

Speaking to reporters on Monday, a senior administration official repeatedly declined to specify whether the U.S. government considers the most recent deployment of Russian troops into eastern Ukraine as a new invasion of the country. The official noted that Russian troops have secretly operated in eastern Ukraine for eight years, and now Russia’s military presence in the region will be more overt. The U.S. government will observe and assess what moves Russia makes in the coming hours and the Biden administration will announce further steps on Tuesday, likely to include more sanctions, the senior administration official said.

Russia has amassed up to 190,000 troops along Ukraine’s borders, Reuters reported on Friday, citing Michael Carpenter, the U.S. ambassador to the Organization for Security and Cooperation in Europe. “This is the most significant military mobilization in Europe since the Second World War,” Carpenter said in a statement.

The Russian military buildup has been along Ukraine’s eastern and northern borders. Many Russian troops have been sent to Belarus, where they were ostensibly taking part in exercises. However, commercial satellite imagery recently revealed a military pontoon bridge had been built on the Pripyat River in Belarus less than two-and-a-half miles from the border with Ukraine. The area is inside a region in Belarus that was evacuated following the 1986 nuclear disaster at the Chernobyl power plant.

Beginning in early February, a Russian amphibious group including three tank landing ships began operating in the Black Sea, according to USNI News, which also reported the Russians have sent two cruisers to the Mediterranean Sea. The U.S. aircraft carrier USS Harry S. Truman is also currently in the Mediterranean following a recent NATO exercise.

Ukraine’s ministry of foreign affairs has accused the Russian navy of blocking its ports in the Black Sea and the Sea of Azov and the Kerch Strait under the pretense of holding naval exercises. “Such aggressive actions of the Russian Federation, which fit into the concept of its hybrid war against Ukraine, are unacceptable,” the ministry said in a Feb. 10 statement.

Ukraine became an independent nation when the Soviet Union dissolved in 1991, but Russian President Vladimir Putin has long sought to bring both Ukraine and Belarus under Moscow’s control.

The eight-year conflict between Russia and Ukraine has cost the lives of more than 13,000 people, according to the International Crisis Group, an independent research and advocacy group that works to prevent wars and shape peace.

Over the course of the conflict, Ukrainian forces and Russian-led separatists have dug a series of trenches in eastern Ukraine, where the fighting resembles World War I. While the Ukrainian military has improved in the last eight years, the Russian armed forces are much larger and they have more sophisticated equipment than the Ukrainians.

Prior to Russia’s latest invasion of Ukraine, the U.S. government had closed its embassy in Kyiv and warned all American citizens to leave the country.

About 4,700 U.S. troops from the 82nd Airborne Division are in the process of deploying to Poland and another 300 soldiers with the 18th Airborne Corps have arrived in Germany to reinforce NATO allies. Another 1,000 soldiers with the Army’s 2nd Cavalry Regiment have moved from Vilseck, Germany, to Romania, where they are augmenting about 900 American troops already in Romania on a rotation.

More U.S. troops and aircraft could be sent to Europe as part of the NATO Response Force, but defense officials have been clear that no American forces are deploying to Ukraine.

“The president has made clear that U.S. troops are not going to be fighting in Ukraine,” Pentagon spokesman John Kirby said last week. “The troops that we have added to the already 80,000 that are based in Europe are going to reassure our allies and our partners to deter aggression against the alliance, to conduct some joint training. So, I know of no decision – or no need – to change the parameters of the European theater with respect to combat zone tax exclusion.”