'Every indication is that Russia continues to plan for a full-scale attack on Ukraine.' 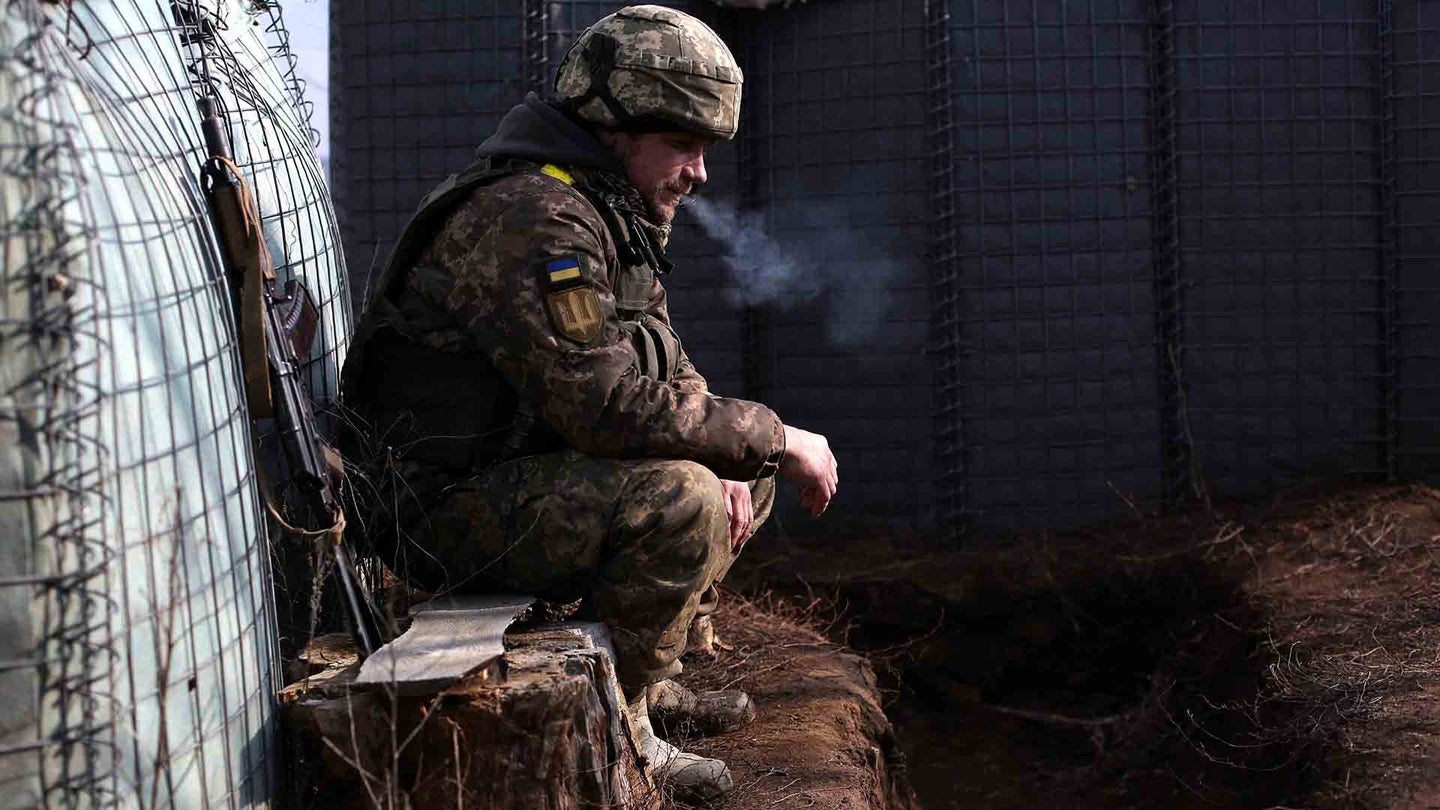 TOPSHOT - A Ukrainian serviceman smokes at a position on the front line with Russia-backed separatists near the settlement of Troitske in the Lugansk region on February 22, 2022, a day after Russia recognised east Ukraine's separatist republics and ordered the Russian army to send troops there as "peacekeepers". - The recognition of Donetsk and Lugansk rebel republics effectively buries the fragile peace process regulating the conflict in eastern Ukraine, known as the Minsk accords. Russian President recognised the rebels despite the West repeatedly warning him not to and threatening Moscow with a massive sanctions response. (Photo by Anatolii STEPANOV / AFP) (Photo by ANATOLII STEPANOV/AFP via Getty Images).
SHARE

Ukraine has become smothered by the fog of war since Russian troops began crossing the border overnight under the guise of a “peacekeeping” operation.

On Monday, Putin recognized two breakaway provinces in eastern Ukraine as independent republics and then ordered his forces into the so-called Donetsk and Luhansk People’s Republics, where Russian trained and led separatist have fought against the Kyiv government since 2014.

President Joe Biden announced on Tuesday that he had authorized moving U.S. troops and equipment currently in Europe to Latvia, Lithuania, and Estonia, but he did not say how many service members are going to those countries or what units they are assigned to.

“Let me be clear: These are totally defensive moves on our part,” Biden said during a speech from the White House. “We have no intention of fighting Russia. We want to send an unmistakable message though: that the United States together with our allies will defend every inch of NATO territory and abide by the commitments we’ve made to NATO.”

About 5,000 U.S. troops have already deployed to Europe and another 1,000 soldiers have moved from Germany to Romania.

Now, the world is holding its breath as it awaits Russian President Vladimir Putin’s next move.

NATO Secretary General Jens Stoltenberg described the Russian military’s move into Ukraine as a “further invasion of a country which is already invaded.”

For the moment, NATO’s response force, which would include U.S. troops, is on a state of heightened alert but it has not been activated yet, Stoltenberg told reporters during a news conference on Tuesday.

Stoltenberg also said that Russia’s most recent incursion into Ukraine could be the prelude to a much bigger military operation.

“Every indication is that Russia continues to plan for a full-scale attack on Ukraine,” Stoltenberg said. “We see the ongoing military buildup. They promise to step back but they have continued to step up. We see that more and more of their forces are moving out of the camps and are in combat formations and ready to strike.”

Russia’s parliament may have provided Putin with the legal framework to launch a wider attack on Tuesday when members authorized sending troops outside of Russia.

Right now, the White House appears to be trying to catch up with the situation on the ground. Even though the Biden administration had long expected Russia to make some sort of move against Ukraine, it was slow to acknowledge on Monday that a new Russian invasion of Ukraine was underway.

Initially, a senior administration official declined to call the Russian troop movements an invasion when questioned by reporters on Monday night. The official pointed out that Russian forces have operated secretly in eastern Ukraine for the past eight years.

“Russian troops have continued to move closer to the border in what looks like plans for an invasion at any moment, most likely in response to attacks Russia falsely claims are occurring in the Donbas,” said the senior administration official, who added the U.S. government would continue to pursue a diplomatic solution “until the tanks roll.”

But on Tuesday, Principal Deputy National Security Advisor Jon Finer said the deployment of Russian troops to the two breakaway provinces in Ukraine is “the beginning of an invasion.”

“An invasion is an invasion, and that is what is underway, but Russia has been invading Ukraine since 2014,” Finer told CNN’s Brianna Keilar on Tuesday.

When Keilar pointed out that the Biden administration had not been clear about whether the Russian troop movements constituted an invasion, which would trigger massive sanctions, Finer replied: “I am calling it an invasion. We are taking a severe response, including sanctions on Russia, that we’ll be rolling out in a matter of hours.”

UPDATE: This story was updated on Feb. 22 with comments from President Joe Biden.