After Karzai Who Will Lead Afghanistan?

The U.S military has just a matter of months to figure out its post-2014 presence will look like in Afghanistan.... 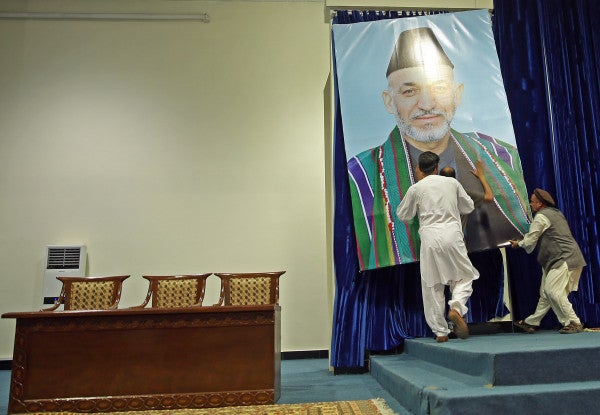 The U.S military has just a matter of months to figure out its post-2014 presence will look like in Afghanistan. But first, there has to be a victor in the presidential election to replace President Hamid Karzai.

After a promising start, Afghanistan’s elections are beginning to look anything but clean or straightforward. Following the first vote in April, the June 14 run-off in Afghanistan’s presidential election has dive-bombed into a mess of accusations on an industrial scale. Ashraf Ghani has been declared the preliminary winner, but his opponent Abdullah Abdullah has accused him of ballot stuffing and is threatening to declare himself winner by fiat.

Gen. Joseph Dunford, the top U.S. commander in Afghanistan, said at a Pentagon briefing in March that if a bilateral security agreement for U.S. troops isn’t signed by September, it will become very difficult to plan for the post-2014 presence that President Barack Obama wants.

Karzai has so far refused to sign the agreement, something both his potential successors claim they plan to rectify if elected. But electoral troubles are threatening the delays that Dunford warned about.

Here is a look at the two warring candidates, Ashraf Ghani and Abdullah Abdullah. Both have agreed to sign the bilateral security agreement, but only one of them will ultimately lead Afghanistan — and the United States — into its post-war future.

Ashraf Ghani Ahmadzai is a Pashtun from the powerful Ahmadzai tribe in Logar province. His father was an influential figure under the old monarchy, and Ghani led a privileged life by Afghan standards. He attended the American University in Beirut, Lebanon, then taught anthropology at Kabul University in 1977. That same year, he received a government scholarship to attend Columbia University in New York. It would be the last time he would see Afghanistan for 24 years.

When the People’s Democratic Party of Afghanistan communist party seized control of Afghanistan in a bloody coup, most of Ghani’s male family members were arrested, leaving him unable to return home for fear of joining them in prison. He stayed at Columbia for his doctorate in cultural anthropology, then spent the next decade teaching at Berkeley and Johns Hopkins. This was followed by a long tenure with the World Bank working on international development all over the world. He is married to a Lebanese Christian he met while in Beirut.

Following the 9/11 attacks and the NATO invasion of Afghanistan, he became a key figure in the new Afghan government, working closely with the U.N. and serving as finance minister from 2002 to 2004. He afterwards served as chancellor of Kabul University until his failed 2009 presidential run, where he came in fourth place. He continued to participate in several international think tanks, and served as a key advisor to Karzai.

As a development guru, he has claimed that “One dollar of private investment is worth 20 dollars in foreign aid.” He argued that Afghanistan will never cease being a narco-state through opium eradication and crop replacement, but with infrastructure and industry, particularly textiles and mining. “Cotton cannot replace opium, but t-shirts can.” He fully supports signing the BSA with the United States, and shares his opponent’s view that it should have been signed over a year ago.

During the first round of voting, Ghani came in far behind, pulling 31.5% of the vote to Abdullah’s 45%. He has consistently argued that the vote should be as fair and transparent as possible. “As a candidate I don’t want a single fraudulent vote in my favor and call on other candidates to denounce fraud, not encourage it.” Considering his abrupt turnaround during the run-off, pulling 56% of the vote to Abdullah’s 44% amid allegations of massive voting fraud, his sincerity on that score may be in serious doubt.

Abdullah Abdullah originally hailed from Kabul, the step son of a senator appointed by the old king Mohammed Zahir Shah. Of Tajik and Pashtun descent, he was considered an excellent student in his youth, eventually studying eye medicine at the University of Kabul and gained his medical diploma in 1983. Due to unrest, he briefly left the country and worked in a refugee hospital in Pakistan.

In 1985, he became the top medical officer for the Panjshir Resistance Front under Ahmad Shah Massoud, a mujahedeen group engaged in ferocious fighting with the Soviet occupation. Abdullah became a close friend and confidant of Massoud, who was a revered figure among Tajiks for his strategic and tactical genius against the Russians. This association set the stage for his political career down the road.

Abdullah continued to serve as an advisor for Massoud through the civil wars of the 1990s, serving as minister of foreign affairs for the Northern Alliance battling the Taliban. After the assassination of Massoud by Al-Qaeda and the overthrow of the Taliban in 2001, he continued to serve as head of foreign affairs for both the interim and 2004 elected governments. After a failed presidential bid in 2009, he formed the leading opposition party against Hamid Karzai.

Abdullah, like his opponent, fully supports the BSA with the United States. He has argued against negotiation with the Taliban in the past, saying the group must be defeated on the battlefield. “I should say that Taliban are not fighting in order to be accommodated … There are groups that will fight to the death. Whether we talk to them or we don’t talk to them, they will continue to fight.” He has campaigned steadily against endemic corruption in Afghanistan’s government, and says development cannot move forward until it is addressed.

Following allegations of widespread fraud in the run-off election, Abdullah has rejected the projected win of Ghani, saying he will not accept the election until every fraudulent vote has been removed. He has threatened to declare himself winner, saying, “We are the winner of the election without any doubt.” Both President Barack Obama and Secretary of State John Kerry have warned him against such a move, saying aid money would be at risk.

The Afghan Independent Election Commission has said it would take several weeks to audit millions of votes from about 7,000 polling stations accused of fraud. Top U.S. senators John McCain, Lindsey Graham, and Carl Levin have met with the candidates and pressured them to accept the election results after an audit.

The United Nations Assistance Mission to Afghanistan released a press statement on Tuesday urging “the IEC and IECC to cooperate within the framework of their mandates to conduct additional audits – notably, those supported by both candidates and which would provide for the investigation of ballots from more than 7,000 polling stations – in a rigorous, timely and expeditious manner.”

Both candidates have emphasized they are eager to work with the United States and other countries for aid and stabilization. U.S. leaders have not endorsed either candidate. After the years of policy limbo under Karzai, strength and legitimacy from either candidate would serve better than the status quo.

In the meantime, protests and recriminations continue, largely split along Pashtun-Tajik ethnic lines. The powerful governor of Balkh province and Abdullah-backer Atta Mohammed Noor has called for civil unrest and a “parallel state.” Continued Taliban attacks, such as a suicide bomber killing 16 people, including four Czech soldiers, are also adding to the turmoil.