Why Having Veterans In Congress Matters

The Democratic and Republican party nominees in 2016, and likely their vice presidential nominees, will almost certainly have the same... 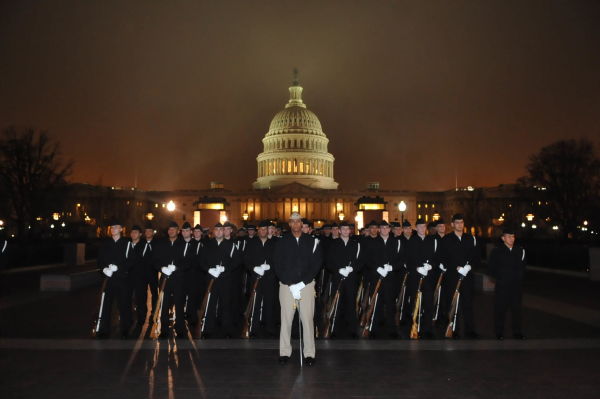 The Democratic and Republican party nominees in 2016, and likely their vice presidential nominees, will almost certainly have the same thing in common as the nominees in 2012; Barack Obama, Joe Biden, Mitt Romney, and Paul Ryan — no military service.

This is a systemic problem. Just 96 current voting members of Congress have served in the military, a historic low. The value of military service, beyond patriotic appeal, has been lost in our political system.

Military service alone does not qualify a veteran to be elected to Congress. Standard bromides of “I know what it’s like to go to war,” while true, in the end have little to do with voters’ pocketbooks, the quality of their child’s school, the safety of their neighborhoods, or whether they have access to quality and affordable health care.

And to be clear, there are a lot of veterans I would not want representing anyone I cared about in Congress, including a few who unfortunately are sitting there right now.

But military service should be seen as one big plus — bigger than previous congressional staff work or even local elected office — for candidates for federal office. Beyond the widely believed platitudes that military service equates to someone willing to sacrifice of themselves for their country, beyond the belief that those who have worn our country’s uniform can normally be relied upon to value their word, we need some clarity on why military service also helps a political candidate understand the government he or she is serving, the federal budget, the $600 billion Department of Defense budget, the national economy, and the troops they would govern as an elected member of Congress.

More than half of discretionary federal spending goes to the military. More than 2.2 million Americans are serving the active duty or reserve component armed forces. We need informed people to decide how that money is spent, how much of that money isn’t spent on the military at all, and to oversee the military leaders who command our troops.

Informed congressional oversight of the military matters. A lot of money is spent on defense programs that have little to do with national security strategy and everything to do with lobbying prowess. We have spent twice the amount of money on the embattled F-35 program than what it cost to put a man on the moon, even adjusted for inflation. We have spent $160 billion in cost overruns for the F-35 program. How does this impact voters? How was your commute this morning? If it were a bit bumpy or slowed by traffic, consider that after a long and protracted battle, Congress just authorized $8 billion for just three months of highway spending. And yet with little Congressional oversight, we have wasted $160 billion on 2,400 aircraft.

How much of this spending was authorized by members of Congress unable to ask tough questions simply because they were unfamiliar with the needs of front-line troops?

Increasing the number of qualified veterans in Congress will also help address the military’s leadership crisis. We are wrapping up a war in Afghanistan that, like the war in Iraq, didn’t go so well. Yet only two general officers in command of operations in either theater were ever relieved of their commands, and one was Army Gen. Stanley McChrystal over some impolitic quotes from his staff in a Rolling Stone article, not operational failures. This isn’t how the military used to do it. Here’s how command used to work, and should work again: You are given command for a few months, and if you can’t perform, you are relieved. That system of managing generals has gone away, replaced with a Rumsfeldian system of micromanagement that has infected the entire force. This has had disastrous consequences for retention of top talent.

For general officers who are not performing, they can find one place for unconditional encouragement: Congress. When they testify in front of Congress, they are showered with appreciation for their service, and few ask the tough questions.

Veterans, by the virtue of their military service, are free to ask the tough questions. Here’s a tough question to ask a general testifying in front of the House Armed Services Committee: “With so many of our best young officers leaving the military, are you certain the three- and four-star generals twenty years from now will be the best junior officers the military has today?”

Right now we have a military that is getting no proper oversight from Congress, allowing taxpayer dollars to go where they shouldn’t, and leaving a bureaucratic military in which the best young officers leave to find something else to do.

I can’t guarantee that each and every veteran who enters Congress will be committed to solving these issues. I can tell you that most men and women who served in Iraq and Afghanistan found an emotional attachment to the welfare of the country that simply could not have been replicated anywhere else.

I know this from personal experience.

When I got home from serving in Iraq, I was given a life that was not given to 4,486 other American men and women who also fought there. Last Memorial Day I visited Arlington National Cemetery, and walked around Lot 60, the final resting place of many of those killed in Iraq and Afghanistan.

There, I spoke to family members of those who lost loved ones to those wars, and asked each about the individual they were visiting. What wasn’t far from my mind, of course, was that I could be resting in Lot 60 right now. If I had been in the wrong place at the wrong time, it could have been my mother, father, and sister visiting me on Memorial Day.

Since I have returned from Iraq, I have striven to live a life worthy of the sacrifices made by the men and women who rest at Arlington. I am obligated to pass on their sacrifice to others. They have given me the courage to run for the 7th Congressional District of Illinois. And so weeks after I visited Arlington, I announced I am a candidate.

In Congress, I would be obligated to those brave men and women in uniform who died on foreign soil to vote with the welfare of the country and the 7th District, not my own political considerations, in mind.

That’s why having more veterans in Congress matters.

UPDATE: An earlier version of this article misidentified the lot at Arlington National Cemetery devoted to the fallen of Iraq and Afghanistan.