Mattis Wants You To Know He’s Not Running For President

Editor’s Note: This article by Hope Hodge Seckoriginally appeared on Military.com, the premier source of information for the military and veteran... 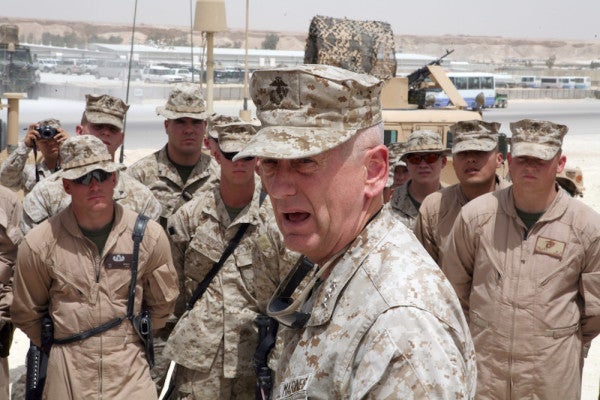 Editor’s Note: This article by Hope Hodge Seckoriginally appeared on Military.com, the premier source of information for the military and veteran community.

The new favorite Cinderella story in Washington involves a plan to draft the beloved former Marine Gen. James Mattis to run as a dark horse candidate against a lackluster presidential field.

But Mattis, speaking at the Center for Strategic and International Studies on Friday morning, declined to indulge speculation.

“No, I haven't given any thought to” a presidential run, Mattis said, dismissing further discussion of the possibility.

Following his lecture on the Middle East and Iranian aggression, Mattis, the former four-star commander of U.S. Central Command and a current fellow at the Hoover Institution in California, implied he was mystified by the buzz surrounding his hypothetical candidacy.

“It's been going on for 15 months. Since coming back from overseas, this is more of a foreign country than the places overseas,” he said. “I don't understand it. It's like America has lost faith in rational thought.”

He declined to comment on the current field of candidates, saying that 40 years as a naval officer had ingrained in him an aversion to taking a partisan stance.

Nonetheless, his talk Friday contained stern indictments of U.S. foreign policy and President Barack Obama himself, and hinted at his feelings regarding at least one presidential front-runner. Despite Mattis' refusal to publicly entertain the possibility of a candidacy, his speech is unlikely to dampen the excitement of many who would like to see him run.

Mattis' remarks focused on Iran, which he characterized as the “single most enduring threat to stability and peace in the Middle East,” regardless of the attention given to Islamic State extremists and other non-state actors.

The 2015 deal that stipulated Iran would surrender its enriched uranium and halt plutonium production in exchange for relief from international economic sanctions only served to buy time, Mattis said. And it's clear from Iranian rhetoric and actions, he added, that the country's leaders do not plan to act in good faith.

“[Iran's Ayatollah Ali Khamenei] summed it up very well when he said those who say that the future lies in negotiations, not in missiles, are either ignorant or traitors,” Mattis said. “That is the Supreme Leader. I think we should take him at his word.”

In the face of the Iranian nuclear threat and clear hostile intentions and following an imperfect nuclear deal, the U.S. is in a “strategy-free mode,” he said, shifting attention from one region of the world to another without consistency.

“We have been attacking in Iraq, then we shifted to Syria. Now we're in gradual escalation right now,” Mattis said, adding that the “Pacific pivot” of recent years had also left Middle Eastern allies concerned.

“My point is, we've got to be able to walk and chew gum at the same time,” he said.

The president, Mattis said, seems to have a troubling lack of regard for international allies. Mattis praised the loyalty of nations including Jordan and the United Arab Emirates, and noted the allies were crucial to peacekeeping efforts.

When journalist Jeffrey Goldberg published his New Yorker profile of Obama's foreign policy in March, Mattis said he thought he had printed out the wrong article and was reading comments by bombastic Republican presidential hopeful Donald Trump regarding U.S. allies instead.

“It wasn't Trump; it was the president saying that our allies are free riders and that sort of thing,” he said. “For a sitting U.S. president to see our allies as freeloaders is nuts.”

Congress, too, has failed, Mattis said.

It had neglected to put in place “standby” economic sanctions to inflict if Iran did not keep its end of the nuclear deal, he said, and had not officially authorized use of military force against the Islamic State, which would send a clear message about American resolve in the region. Congress had also failed to increase intelligence funding for use against Iran, Mattis said.

“The bottom line on the American situation is that the next president is going to inherit a mess,” he said. “That's the most diplomatic word for it.”

Faced with declining influence in the Middle East and persistent hostility from Iran, Mattis said the U.S. must plan for the worst, addressing Iran's cyber and ballistic missile threat as well as its long-term nuclear aspirations. America needs to remain staunch in its policy and maintain strong communication with allies, regarding Iran not as a responsible nation state but as a “revolutionary cause devoted to mayhem,” Mattis said.

“Worth more than 10 battleships or five armed divisions is a sense of American political resolve,” he said.