Meet The Army General Trump May Pick As Vice President

Presumptive Republican presidential nominee Donald Trump is expected to announce his pick to be vice president of the United States... 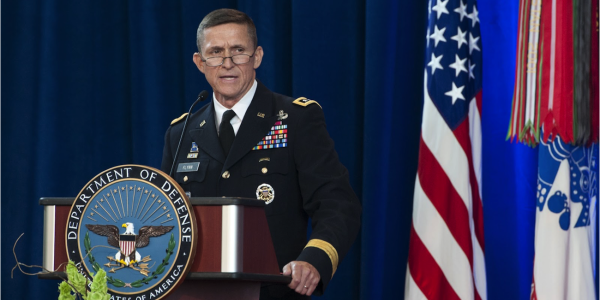 Presumptive Republican presidential nominee Donald Trump is expected to announce his pick to be vice president of the United States any day. The short list is reportedly down to just a few names — including New Jersey Gov. Chris Christie, Indiana Gov. Mike Pence, and former Speaker of the House Newt Gingrich. But another name that is frequently mentioned is lesser known: retired Army Lt. Gen. Michael T. Flynn.

Flynn, 57, retired from the Army in August 2014 as the head of the Defense Intelligence Agency, the Pentagon’s intelligence arm. It was widely reported that he was forced out amid clashes with the Obama administration over his vision for the department and leadership style. In a recent piece in the New York Post, Flynn said that when James Clapper, the Director of National Intelligence, told him he was fired, “I knew then it had more to do with the stand I took on radical Islamism and the expansion of al Qaeda and its associated movements.”

In the 2016 election, Flynn became an early and vocal supporter of Trump’s bid for the White House, endorsing the real estate mogul in February 2016, and became an advisor on military and national security affairs.

Flynn has reportedly developed a close relationship with Trump since, and is one of two generals who Trump may be considering to be his vice presidential pick. The other has not been identified.

“I like the generals. I like the concept of the generals. We’re thinking about — actually there are two of them that are under consideration,” Trump said recently on Fox News, as quoted by Politico.

A recent Washington Post report describes Trump and Flynn as having developed a trusting partnership, “based on their close working relationship over the course of the campaign on policy.”

The former general, who is actually a registered Democrat, would bolster Trump’s brand as a political outsider coming in to Washington to shake things up.

Flynn’s background as the former top military intelligence official would also certainly help the Trump campaign hammer his rival, former Secretary of State Hillary Clinton, over her unauthorized use of a private email server.

Flynn recently told CNN that Clinton’s conduct amounted to a “lack of accountability, frankly, in a person who should have been much more responsible in her actions as the secretary of state of the United States of America.

“If it were me,” he said, “I would have been out the door and probably in jail.”