While Donald Trump prepares to become the next president of the United States, he also appears to be keeping a... 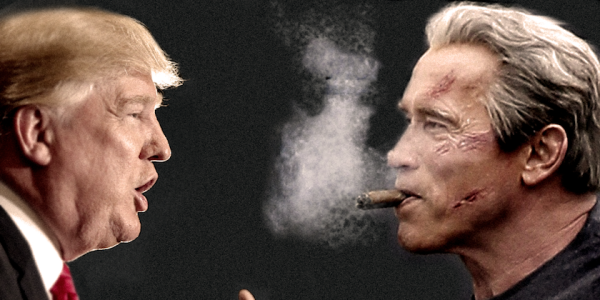 While Donald Trump prepares to become the next president of the United States, he also appears to be keeping a close eye on the reality TV show that made him a global superstar. The show, “The Apprentice,” was recently rebooted as “The New Celebrity Apprentice” with actor and former California governor Arnold Schwarzenegger as its host. And apparently the president-elect, who is still one of the show’s executive producers, is not happy with what he sees.

On Friday morning, several hours before Trump was set to be briefed by the nation’s top intelligence and law enforcement officials about the Russian hacking of American political institutions, he took to Twitter to slam Schwarzenegger for what he deemed a lackluster performance on the season premiere of the reality TV show, which pits a group of celebrity contestants against each other in a dog-eat-dog competition to determine who is the best at doing business.

Wow, the ratings are in and Arnold Schwarzenegger got "swamped" (or destroyed) by comparison to the ratings machine, DJT. So much for….

being a movie star-and that was season 1 compared to season 14. Now compare him to my season 1. But who cares, he supported Kasich & Hillary

While Trump, who starred as the show’s host for its first 14 seasons, might not be the ratings machine — that distinction goes to Super Bowl XLIX, which currently stands as the most-watched TV event in American history — he’s certainly a man who knows how to draw a big television audience. His first presidential debate with Hillary Clinton was the most watched U.S. presidential debate ever.

Trump’s criticisms are not unfounded. According to Variety, “The New Celebrity Apprentice” debuted with 4.93 million viewers. That’s a 43% decrease from the numbers Trump pulled on his last premiere as host in 2015. (Sad!)

Schwarzenegger, who played a machine — a killing machine — in “The Terminator” series before serving two terms as governor of California for the Republican party, made it clear during the election that he did not support Trump’s bid for the presidency. In his response to Trump’s scathing Twitter remarks, the so-called Governator attempted to shift the attention away from his shortcomings as the host of “The New Celebrity Apprentice” to Trump’s responsibilities as president-to-be.

I wish you the best of luck and I hope you'll work for ALL of the American people as aggressively as you worked for your ratings.

Trump’s four-year term as president of the United States will commence on January 20.