When I was a New York college senior in fall 2001 trying to make sense of the fall of the... 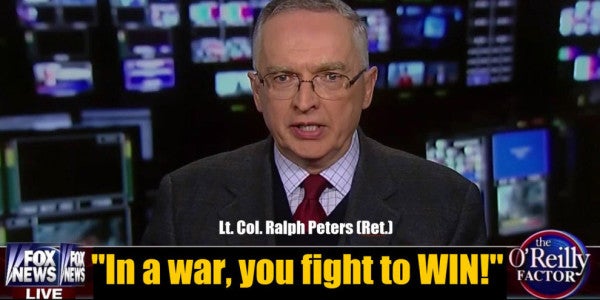 When I was a New York college senior in fall 2001 trying to make sense of the fall of the World Trade Center towers, Ralph Peters was one of the first voices to — well, not comfort me, exactly, but get me excited for war, at least. “In much of this troubled world,” the retired lieutenant colonel and military intelligence vet wrote, “only blood persuades.”

Peters argued in dozens of lucid essays and columns that the United States was beset by savagery abroad and squishy tolerance at home. It was spicy stuff, perhaps a bit myopic, but smartly delivered at a time when Americans craved explanations for a rapidly changing world.

Naturally, it played well on Fox News Channel, where for the past decade, Peters has intoned on how to be tough on terror — and how liberals couldn’t hack it. “The Obama Administration doesn't know history, they don't want to know history, they don't want to deal with reality,” he told Fox viewers in 2014. “And the reality is that the way you deal with Islamic State — these blood-thirsty, blood-drunken terrorists — is to kill them, keep on killing them until you kill the last one, then you kill his pet goat! That's how you deal with them.” This was just a few years after Peters told Fox viewers that if Bowe Bergdahl really was a deserter, the Taliban should kill him to “save us a lot of legal hassles and legal bills.”

But Peters is not talking about blood and guts and veins in his teeth on Fox News anymore, because Fox News is too crazy for him. He’s quitting the right-wing talk network — with a veteran’s righteous fury, according to his resignation email, obtained by Buzzfeed.

“I swore to ‘support and defend the Constitution,’ and that oath did not expire when I took off my uniform,” he wrote. “Today, I feel that Fox News is assaulting our constitutional order and the rule of law, while fostering corrosive and unjustified paranoia among viewers.”

Think about this: A military man who advocates brutality in war as the norm, who’s called Muslims “savage” and “primitive,” who calls Obama “a pussy” on live television, thinks Fox News has gone overboard. And he’s goddamn right.

“In my view, Fox has degenerated from providing a legitimate and much-needed outlet for conservative voices to a mere propaganda machine for a destructive and ethically ruinous administration,” Peters writes:

When prime-time hosts — who have never served our country in any capacity — dismiss facts and empirical reality to launch profoundly dishonest assaults on the FBI, the Justice Department, the courts, the intelligence community (in which I served) and, not least, a model public servant and genuine war hero such as Robert Mueller — all the while scaremongering with lurid warnings of “deep-state” machinations — I cannot be part of the same organization, even at a remove. To me, Fox News is now wittingly harming our system of government for profit.

Where is the lie?

To be fair, as an officer and a relatively learned man, Peters has always tried to be a little more circumspect than his Fox News soundbites suggest — and it’s sent him drifting farther away from what passes for “mainstream” conservative thought nowadays.

Peters’ last three TV hits for Fox placed him at odds with President Trump and the administration’s supporters: One argued that Trump’s call for a military parade was a stupid diversion from real readiness issues. One suggested the idea of a Trump-North Korea summit idea was dumb — Kim Jong Un, he argued, was just taking advantage of Trump’s vanity to buy time for its nuclear program. And most recently, he went on air to defend a column that must have driven Fox viewers bat-guano crazy. Its title: “I’m a military man and I think we should ban assault weapons.”

All thoroughly reasonable opinions — ones we can reasonably disagree on and debate. Unless, of course, you think that anyone who’s skeptical about military parades, meetings with tyrants, or readily available Bushmasters is an insane communist psychotic who hates America.

If that’s the case, don’t miss Tucker Carlson explaining how liberals are the real racists, tonight at 8 on Fox News.