When retired Lt. General Mike Flynn joined Donald Trump on the presidential campaign trail last year, he spent much of... 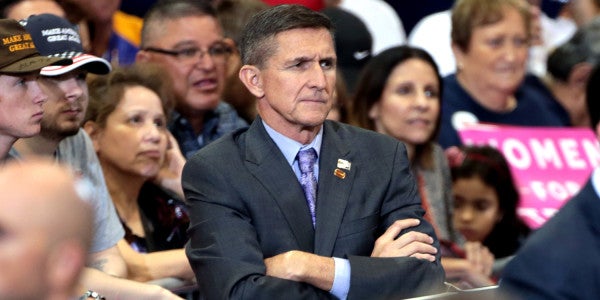 When retired Lt. General Mike Flynn joined Donald Trump on the presidential campaign trail last year, he spent much of his time complaining about “pay for play” Washington political lobbying. He stood alongside Trump as the candidate vowed to “drain the swamp” and keep lobbyists out of his White House. He told crowds to “lock her up,” arguing that Hillary Clinton’s weak opsec and closeness to foreign governments made her a criminal.

On Wednesday night, Flynn — who lasted 24 days as national security adviser before his forced resignation for misleading the vice president about his foreign ties — retroactively registered as an overseas lobbyist with the Department of Justice, saying he’d collected $530,000 between last August and November as a “foreign agent” for Turkish government interests. At least a part of his activities involved writing an op-ed for The Hill, published on Election Day, that praised Turkey’s authoritarian president, Recep Erdogan, and decried a U.S.-based Turkish dissident as a “radical Islamist,” based on info exchanged with his consulting business’s paying Turkish client.

Related: Maybe We All Talked With The Russian Ambassador And Forgot About It»

Flynn’s client told the AP he had asked for the $530,000 back, “because of his dissatisfaction with the company's performance.”

Weird how that work had slipped Flynn’s mind during the campaign, where foreign influence on U.S. politics may have come up a few times, and in his required disclosures for his squandered role as the president’s top adviser on sensitive security issues. But Flynn has shown a propensity for memory problems before, apparently forgetting what he’d discussed with Russian Ambassador Sergey Kislyak a couple of times.

Here’s hoping he gets the help he needs with his memory problem. There’s a pill for that.