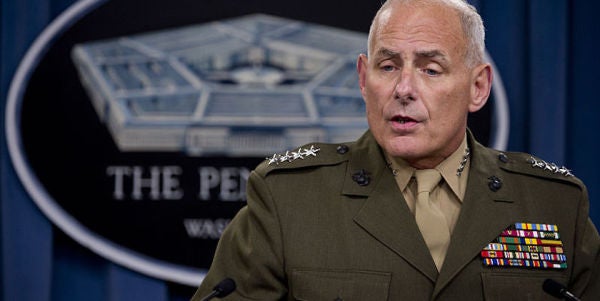 Kelly is the third general to be selected for a top government post in the incoming administration, along with retired Marine Gen. James Mattis, who will be secretary of Defense, and Lt. Gen. Michael Flynn, who will serve as Trump’s national security advisor.

Kelly, who retired in January 2016, will come to the Department of Homeland Security with more than 45 years of service under his belt, ranging from Vietnam to Iraq. Kelly served as the commander of U.S. Southern Command from November 2012, until his retirement.

A former enlisted infantry Marine who rose to the rank of a general, Kelly has earned a reputation for his frankness and candor, as well as his fierce respect for junior service members.

He is also the highest-ranking U.S. military officer to have lost a child in combat operations in Iraq or Afghanistan, when his youngest son, 2nd Lt. Robert Kelly, was killed in Helmand, Afghanistan, on Nov. 9, 2010.

Four days after his son's death, Kelly eulogized the death of two Marines: Lance Cpl. Jordan Haerter and Cpl. Jonathan Yale, who were killed in a suicide attack in Iraq, in 2008, while manning their post and standing their ground.