During a surprise press conference on Oct. 12, White House Chief of Staff Gen. John Kelly assured the media that... 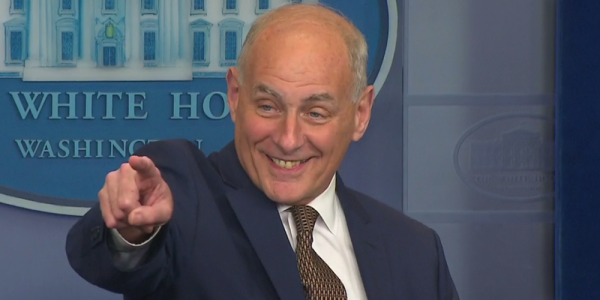 During a surprise press conference on Oct. 12, White House Chief of Staff Gen. John Kelly assured the media that no, he hadn't been fired by President Donald Trump — yet.

“I’m not quitting today,” Kelly told the press, two days after Trump personally denied reports that the retired Marine general, often perceived as a frustrating disciplinarian by some White House officials, was on his last legs. “I just talked to the president, and I don’t think I’m getting fired today,” Kelly joked.

Trump tweeted on Oct. 10 that “the Fake News is at it again, this time trying to hurt one of the finest people I know, General John Kelly, by saying he will soon be fired.” Exasperation with media coverage has been a common refrain for the commander-in-chief… one that Kelly subtly echoed when asked about the president's “frustrations” with the job.

“One of his frustrations is you. All of you,” Kelly said, to laughter. “Not all of you, but many of you … Maybe develop some better sources.”

When asked what keeps him up at night, Kelly delivered a candid response. “The nuclear threat from North Korea, a possible nuclear threat in time from the Iranians, are probably the biggest concerns,” he said. “[But] if this continues with North Korea, and other countries are getting away with that and become nuclear powers… there’s a real impetus for a lot of countries to develop or buy nuclear weapons.”

But Kelly also used the question to deny that Trump had called for the U.S to grow its stockpile of nuclear warheads by “tenfold,” echoing a denial that fellow Marine and current Secretary of Defense James Mattis issued yesterday. “Recent reports that the president called for an increase in the U.S. nuclear arsenal are absolutely false,” Mattis had said in a statement on Oct. 11. “This kind of erroneous reporting is irresponsible.”

In his Thursday press appearance, Kelly suggested Trump had actually mused about nuclear disarmament. “I would tell you this: Despite what someone reported about President Trump — and he wouldn't mind me sharing this with you — he's said this many many times,” Kelly told reporters. “He's said, 'wouldn't it be great if we could get rid of them all?'”

This seems unlikely. In August, Trump claimed on Twitter to have ordered the modernization of the U.S. nuclear arsenal on his first day in office, stating that the current stockpile “is now far stronger and more powerful than ever before.” And during a presidential debate last October, Trump suggested that even more countries like South Korea and Saudi Arabia should possess nuclear arsenals.

“As far as Japan and other countries, we are being ripped off by everybody in the — we're defending other countries,” Trump said at the time. “We are spending a fortune doing it. They have the bargain of the century. All I said is, we have to renegotiate these agreements, because our country cannot afford to defend Saudi Arabia, Japan, Germany, South Korea and many other places.”

At least Kelly’s having fun!