No, John Kelly Is Not A ‘Disgrace To The Uniform He Used To Wear’ By Serving Trump

As Washington devolves into a slugfest over the status of immigrants illegally brought into the United States as children, at... 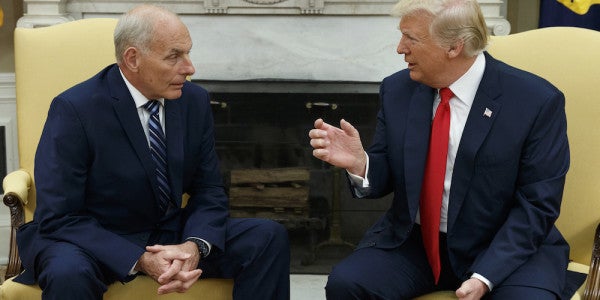 As Washington devolves into a slugfest over the status of immigrants illegally brought into the United States as children, at least one lawmaker has set his sights on a leader of the Trump administration: John Kelly, the retired Marine Corps general and the White House chief of staff tasked with imposing discipline on the unruly White House.

“General Kelly is a hypocrite who is a disgrace to the uniform he used to wear,” wrote Rep. Luis Gutiérrez, Democrat from Illinois, in a strongly worded statement on Sept. 5, condemning then-Secretary of Homeland Security Kelly for lying to the Congressional Hispanic Caucus during a July hearing about the future of the Deferred Action for Childhood Arrivals (DACA) policy established by President Barack Obama in 2012, a program President Donald Trump has moved to end.

“Now as Chief of Staff, this former general is executing the plan to take away their lifeline and taking steps to criminalize young people who live and work here legally,” Gutiérrez said. “He has no honor and should be drummed out of the White House along with the white supremacists and those enabling the President’s actions by ‘just following orders.’”

As a vocal supporter of DACA and an aggressive advocate for immigration reform, Gutiérrez’s frustration is understandable. But the congressman’s broadside against Kelly isn’t just misguided — it’s deeply wrong.

First, the accusation that Kelly “lied straight to the faces” of the Congressional Hispanic Caucus doesn’t seem totally accurate: though Kelly stated that he “personally supports DACA,” he also told lawmakers that he “ guarantee that the administration would defend it in court,” according to Politico. “This is what he’s being told by different attorneys, that if it goes to court it might not survive,” a DHS spokesman clarified to the Washington Post. “They’re leaving it in the hands of the courts to make a decision.” He’s not wrong: 15 states and the District of Columbia are suing the Trump administration (all Democratic attorneys general, per NPR) over the termination of DACA, a legal battle that will likely end up resolved in federal district court, an appeals court, or, eventually, the U.S. Supreme Court. So what, exactly, did Kelly lie about?

Second, the barb of “just following orders” undermines Gutiérrez’s argument that Kelly deceived lawmakers on his approach to DACA. It’s a favorite critique of service members by civilians who see the chain of command as an iron pyramid of authority with no space for free thought or moral reasoning (which isn’t accurate if only because of the prohibition against “unlawful command influence” instituted in the Uniform Code of Military Justice after World War II). But even if Guiterrez thinks Kelly lacks a moral backbone to stand up the commander-in-chief and defend a policy he “personally supports,” the retired general’s moderating influence on the mercurial Trump certainly indicates that he’s no mindless stooge, no banal evil like Adolf Eichmann.

Third, arguing that Kelly's role of chief of staff makes him a “disgrace” to his time in the military (especially coming from a politician who has never served) deeply misunderstands the retired general’s service to the United States — and not just Kelly’s career in the Marine, from his first military deployment to Guantanamo Bay in 1971 to his command of American forces Iraq and leadership of U.S. Southern Command in 2011.

Kelly has spoken openly and often his son — Marine Lt. Robert Kelly, killed by an IED in Afghanistan in 2010 — as a way to discuss the untold sacrifices of American service members. “The protected can’t begin to understand the price paid so they and their families can sleep safe and free at night,” Kelly said during a Veterans Day speech the year of his son’s death, per ABC News. “No, they are not victims but are warriors, your warriors, and warriors are never victims, regardless of how and where they fall.”

But even as Kelly’s lowest point, he drew attention to the sacrifice and courage of others: Just four days after his own son was killed in Afghanistan, Kelly delivered a powerful eulogy for two Marines, Lance Cpl. Jordan Haerter and Cpl. Jonathan Yale, who stood their ground against a vehicle-borne IED loaded with 2,000 points of explosives during a 2008 attack in Ramadi, saving the lives of 150 of their fellow Marines.

“They never even shifted their weight,” Kelly said. “With their feet spread shoulder width apart, they leaned into the danger, firing as fast as they could work their weapons. … Not enough time to think about their families, their country, their flag, or about their lives or their deaths, but more than enough time for two very brave young men to do their duty … into eternity. That is the kind of people who are on watch all over the world tonight — for you.”

White House chief of staff John Kelly walks to Marine One across the South Lawn of the White House in Washington, Monday, Aug. 14, 2017, for the short trip to Andrews Air Force Base en route to New York with President Donald Trump.Photo via Associated Press

In response to the backlash over his salvo at Kelly, Gutiérrez told the Washington Examiner on Sept. 8 that Kelly “is not a general today … he’s a politician.” This is certainly true, to some extent: In a hyperpartisan, hyperpolarized America, everything is politics, whether you want it to be or not. But Secretary of Defense James Mattis put it best when asked on Aug. 31 why he doesn’t abandon the commander-in-chief who doesn’t deem worthy of consultation before delivering major policy changes. “I don’t care if it’s a Republican or Democrat, we all have an obligation to serve,” he said. “That’s all there is to it. And so, you serve.”

Kelly isn’t disgracing the uniform he wore — he’s embodying the principles of duty and service in the best way possible. No government figure is beyond reproach, but the same people who stand in awe at the patience of the chaotic White House or fret about the sterling reputation of National Security Adviser H.R. McMaster, should remember this about the generals in the West Wing: There are higher callings in the world than the daily slugfest of politics.