After President Donald Trump announced his intent to end the Deferred Action for Childhood Arrivals (DACA) immigration policy established in... 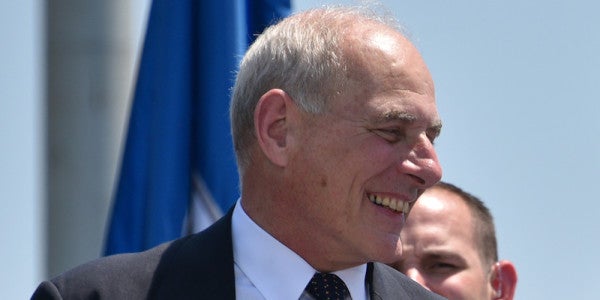 After President Donald Trump announced his intent to end the Deferred Action for Childhood Arrivals (DACA) immigration policy established in 2012, Illinois Democratic Rep. Luis Gutiérrez took aim at retired Marine general, Gold Star father, and White House Chief of Staff John Kelly for what he saw as enabling Trump, calling him “a hypocrite who is a disgrace to the uniform he used to wear.”

“This former general is executing the plan to take away their lifeline and taking steps to criminalize young people who live and work here legally,” Gutiérrez said. “He has no honor and should be drummed out of the White House along with the white supremacists and those enabling the President’s actions by ‘just following orders.’”

In an exclusive statement to Fox News following the backlash to Gutiérrez’s comments, Kelly had a simple message to the Democratic congressman: Put up or shut up.

“As far as the congressman and other irresponsible members of Congress are concerned, they have the luxury of saying what they want as they do nothing and have almost no responsibility,” Kelly told Fox News. “They can call people liars but it would be inappropriate for me to say the same thing back at them. As my blessed mother used to say, “empty barrels make the most noise.’”

Addressing Gutiérrez’s specific criticisms on DACA — that he had “lied straight to the faces” of the Congressional Hispanic Caucus during a July hearing where Kelly, then secretary of homeland security, stated that he “ guarantee” the Trump administration would defend the policy in court — Kelly defended his stance in the lead-up to Trump’s Sept. 5 announcement.

“During my time at DHS – from 20 Jan until this moment – I have met with hundreds of members on both sides of the hill,” Kelly told Fox News. “My always was ‘I have bought you time to do something on DACA.’ I begged and pleaded with them. They did exactly nothing.”

So long as lawmakers continue to debate DACA, this likely won’t be the end of the broadsides between Kelly and Gutiérrez. But in terms of political points, Kelly’s absolutely in the lead with that sick nasty burn.

We now go live to Secretary of Defense James Mattis: