An Iraqi pilot who was conducting training operations with the Air National Guard’s 162nd Air Wing was killed when his... 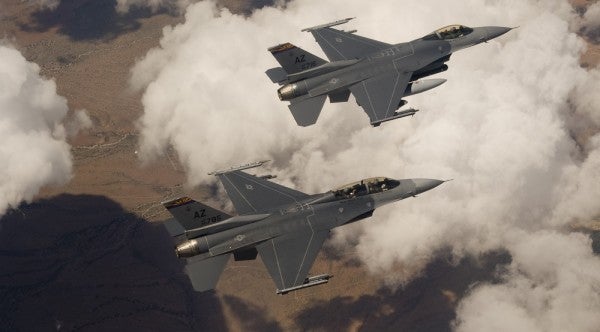 An Iraqi pilot who was conducting training operations with the Air National Guard’s 162nd Air Wing was killed when his F-16 Fighting Falcon crashed in southwest Arizona around 3 p.m. on Sept. 5, according to the unit's official Twitter account.

An F-16 training with the AZANG crashed 20 miles northwest of Safford, Az at 3 p.m. Rescue efforts are underway. More information to come.

The multirole fighter crashed about 20 miles northwest of Safford and 165 miles southeast of Phoenix, 1st Lt. Lacey Roberts told the Tucson Sentinel. An interim safety board was set up by the Air Force to investigate the crash, and the pilot’s death was confirmed by the 162nd’s official Twitter account on Sept. 6:

The 162nd Wing is based at Tucson International Airport, and functions as the Guard’s leading F-16 pilot training site, CBS News reports. The 162nd Wing currently conducts exercises with six partner nations; according to ABC News, the Iraqi pilot was assigned to the162nd as part of that training mission.

Related: The Military Has A Flight-Readiness Problem That’s Not Going Away »

The incident is the second involving an F-16 Fighting Falcon in the 162nd Wing and the the third F-16 crash in Arizona in the last two years. In June 2015, an Iraqi pilot was killed when his F-16 crashed near Douglas, Arizona during a training mission with the 162nd Wing, reports the Tucson Sentinel. In January 2016, a Taiwanese pilot was killed when his F-16 went down near Bagdad, Arizona, according to the Sentinel.