2 Soldiers Killed In An Apache Helicopter Crash During Training

Two soldiers were been killed when their AH-64E Apache helicopter crashed during an April 6 training flight at Fort Campbell,... 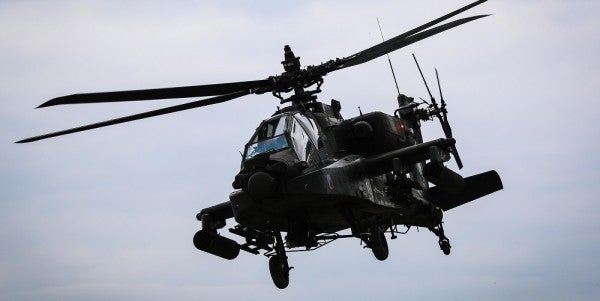 Two soldiers were been killed when their AH-64E Apache helicopter crashed during an April 6 training flight at Fort Campbell, the latest in a string of military aircraft crashes that have killed a total of seven service members 0ver the course of four days.

“This is a day of sadness for Fort Campbell and the 101st Airborne,” Brig. Gen. Todd Royar, acting senior commander of the 101st Airborne Division, said in a statement. “Our thoughts and prayers are with the Families during this difficult time.”

It has been a deadly week for military aviation: Four Marines were killed on April 3 when their CH-53E Super Stallion helicopter crashed in California and an F-16 Thunderbirds pilot was killed the next day when his F-16 crashed in Nevada. Back-to-back crashes of a Marine AV-8B Harrier and CH-53E in Djibouti prompted that country to ground U.S. military aircraft and the U.S. military ending an exercise there.

The latest cluster of crashes began last month: Two Navy aviators were killed on March 14 when their F/A-18F Super Hornet crashed in Florida and seven airmen were killed the next day when their HH-60 Pave Hawk went down in western Iraq.

When asked about the spate of crashes on Thursday, Marine Lt. Gen. Kenneth McKenzie Jr. told reporters that while the number of crashes is unusual, he was, “Not prepared to say that it’s a wave of mishaps or some form of crisis.”

Each crash is unique, but the investigations into the crash will look into whether any underlying problems are affecting other military aircraft, said McKenzie, director of the Joint Staff.

“We look for causality,” he said at a Pentagon news conference. “Was it a single incident? Was it systemic? Is it related to something we’re doing across the entire fleet – be it the entire fleet of that type, model, series aircraft, or something in the training of the aviators that are flying the platforms? Or is it a maintenance issue?”

Sen. Tammy Duckworth, D-Ill., said she believes the recent crashes are a result of budget cuts and constant operations since 2001. Duckworth, a retired Army lieutenant colonel, survived a helicopter crash herself when a Black Hawk helicopter she was piloting was shot down over Iraq in 2004. She lost both of her legs and partial use of her right arm as a result.

Duckworth sent Task & Purpose a statement on Friday about the recent crashes before news of the Apache crash in Kentucky had been released.

“This is what happens when our military is forced to deal with years of sequestration and destructive short-term budgeting but are expected to maintain their operational tempo,” Duckworth said. “Our aircraft across all our military branches have unacceptable levels of deferred maintenance resulting in limited operational capabilities. Our pilots don’t get enough actual flight time in the cockpit and have to operate with the minimal training to meet the most basic of standards instead of as much training as needed to keep them at the highest tactical proficiency and readiness levels for combat operations.”

Although Congress has approved a spending bill that boosts the Defense Department’s budget, restoring the damage to military readiness will take longer than a year, she said.

“It takes time, which is why it’s critical those resources begin to go towards training and building the skills service members need to perform their missions and upgrading old equipment,” Duckworth said.

UPDATE: This story was updated on April 8 with the names of the two soldiers killed in the Apache helicopter crash.