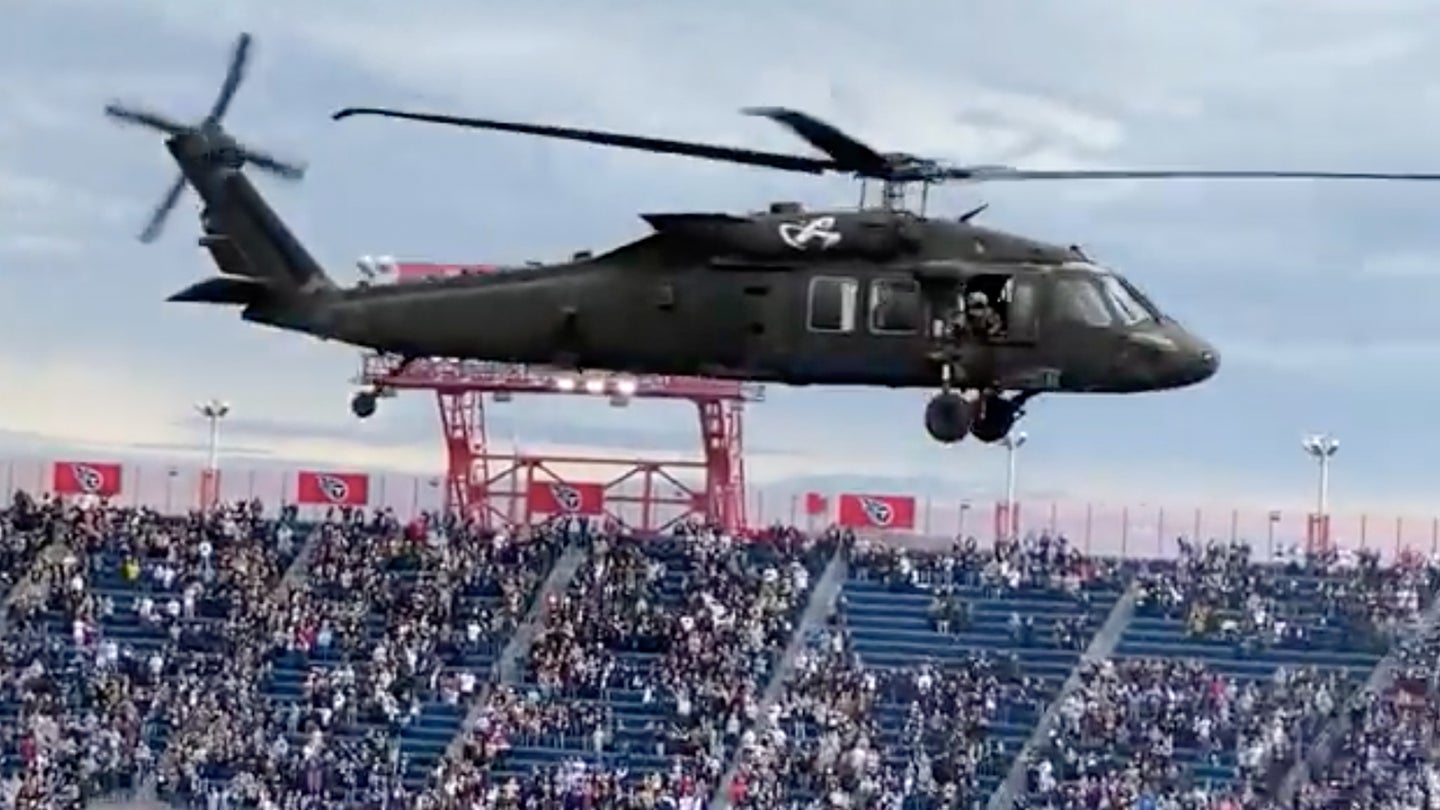 Editor’s note: this story has been updated with a statement from 101st Airborne Division public affairs.

Like doing the limbo at a birthday party, Army helicopter pilots proved that they sure can go low, like really low. Twitter lit up with videos last month of a flight of two Apache helicopters, a Black Hawk and a Chinook flying in formation over Nissan Stadium in Nashville, Tennessee, where the Tennessee Titans football team was playing the New Orleans Saints on Nov. 14.

The thing is, the helicopters are not quite flying over the stadium. Instead, they are flying at eye level with the fans in the nosebleed section, and some social media commenters said they could actually look down on the so-called flyover.

“I was above these guys,” said one Twitter user. “I had a mini heart attack.”

“More like a fly in than a flyover,” wrote another.

In fact, the overflight was so low that it drew the attention of the Federal Aviation Administration, which is “following up with the military” about the event, according to the FAA’s press office. Lt. Col. Kari McEwen, a spokesperson for the 101st Airborne Division, the host division of the helicopters in question, told Nashville news station NewsChannel 5, that the unit which conducted the flight is in touch with the FAA.

“At this time, there is no scheduled review,” she said on Tuesday. On Wednesday however, McEwen sent an update to Task & Purpose saying that “that the command is now conducting an inquiry into the event,” though she did not know yet when the inquiry would be completed.

“General reaction, yeah, it was unsafe,” he told Nashville news station NewsChannel 5. “It was very dangerous.”

“Overall I don’t think it was that unsafe,” said one Air Force helicopter pilot who has flown multiple flyovers and demonstrations for sporting events, airshows and funerals. “A little ‘hot dog’ maybe, but they weren’t in danger and really neither were the fans.”

Unlike civilian pilots, military pilots train extensively to operate at low level, explained the Air Force helo driver, who spoke on the condition of anonymity because he was not cleared to speak with the press. In fact, he thought flying through the stadium may have resembled flying through a canyon, “which we do all the time.”

“For example I fly 50 feet operationally and have entire sorties that I never go above 300 feet,” he said. “We survey our operational areas to allow for this, but the point stands.”

After all, military helicopter pilots have to pull off daring maneuvers on a regular basis just to get in and out of dangerous situations. For example, in 2012, three Army aviators received the Distinguished Flying Cross for performing a one-wheel landing in a Black Hawk and holding position on a steep hillside while under intense fire from enemy fighters in Afghanistan so that the flight medic could get out and bring back an allied casualty. National Guard helicopters also regularly risk steep drops in the thin air of high altitude mountain sides to rescue stranded hikers, as demonstrated by this hair-raising video from 2018.

Flying low is one of the skills military helicopter pilots have to be comfortable with in order to survive certain threat environments, one anonymous Army Black Hawk pilot explained.

“Military aviators typically train to fly at low altitudes to avoid certain radar threats,” said the pilot, who also spoke on the condition of anonymity because he was not cleared to speak with the press. “Different threats would require different altitude restrictions. It’s something that’s trained often to maintain proficiency.”

For example, the pilot recalled a deployment to Syria where he and other pilots were told to fly as low to the ground as possible to avoid being detected by Russia, Turkey or other forces in the area.

“We’re more comfortable the lower we are,” he said.

A former Navy pilot with more than 3,000 hours behind the stick of the Seahawk, the Navy variant of the Army Black Hawk, shared his Army colleague’s sentiment.

“As a helo pilot I get a nosebleed above 500 feet,” he told Task & Purpose. “Flying low can be some of the most exhilarating and terrifying flying you can do, all at the same time.”

Usually when flying below 100 feet, the guideline is that your airspeed should be half the number on your altimeter, the Navy pilot explained, because the room for error gets smaller at lower altitudes. Still, sometimes you have to fly faster depending on the situation, which is why military helicopter pilots constantly fly at low altitude throughout their career so they’re comfortable doing it when those circumstances arise.

“Flying low for helo pilots starts from the beginning of training,” the Navy pilot said.

With that in mind, the slow overflight of Nissan Stadium last month would have been a cakewalk, as long as the pilots involved had a solid briefing and flight plan arranged ahead of time.

“Prior to a flight like this, there is a lot of planning that would need to take place,” the Army pilot said. “This would include multiple dry run rehearsals, live flying rehearsals, sight surveys to identify obstacles, risk assessments which would be looked at and signed off by multiple individuals. The Army’s process of approving missions would ensure due diligence was done in order to mitigate any and all risks identified.”

The Air Force and Navy pilots had a similar experience with their past flyovers and demonstrations.

“We usually do some combination of a ground survey, pre-show aerial survey, and a dedicated route survey on maps that have all obstacles above 99 feet high charted,” said the Air Force pilot. “So a lot of dedicated planning usually goes into something like this. There are service specific rules and training for any ‘demonstration,’ but I’ve done low level demos over crowds before.”

Even during the shows themselves, the former Navy pilot was in constant contact with the local air traffic controller, and usually a military supervisor on the ground as well. Those kinds of low flights are signed off by a three-star admiral, he explained, not only for the sake of safety but also for the sake of optics.

“The military will do a lot of stuff that’s not recorded, but when you know you’ll be recorded you want to be extra careful about how it will look,” the pilot said. “There was a rule: unless you’re being asked to, don’t wind up in the paper.”

The optics part is what stood out to the Navy pilot about the Army’s overflight of the football stadium last month. He pointed out that a lot of people probably thought the flyover looked awesome, but it only takes a few people who feel frightened for the event to seem unsafe. That sentiment was echoed on Twitter: though many commenters thought the flyover was an amazing sight, some worried that it was “way too low.”

“You could give the same ‘wow’ factor to the fans if they had their wheels right on top of the stadium, at the top of the lights, and they would say ‘that’s a cool flyover’ without the Army dealing with the FAA,” the Navy pilot said. “There were eight pilots involved, and all eight of them flew it, so someone had to have signed off on it.”

“There is valid criticism that the pilots could’ve been more conservative and still delivered a perfectly acceptable flyover that would’ve wowed the crowd,” he said. “That said, this was pretty benign absent their altitude, which again could’ve been higher but didn’t really move my needle for ‘that’s so dangerous.’”

The FAA has a few guidelines for flying over crowds. The FAA press office pointed Task & Purpose to the Code of Federal Regulations, which says that no person may operate an aircraft below 1,000 feet while above “any congested area of a city, town, or settlement, or over any open air assembly of persons.” For places without any people or property, the minimum altitude falls to 500 feet.

However, federal code makes an exception for helicopters, which “may be operated at less than the minimums prescribed” as long as the operators comply with FAA-prescribed routes and altitudes and without hazards to people or property on the ground.

The reason helicopters are special is because they can “execute pinpoint emergency landings during power-out emergencies,” and because police and emergency medical teams require extra flexibility with altitude to do their jobs, the FAA wrote.

The Army helicopters were definitely well below those limits. According to the Nashville city government, Nissan stadium stands 190 feet high, and the Army aircraft were a little bit below that height. The maximum seating capacity is 67,700, and while it’s not clear whether the whole house was sold out, videos on Twitter suggest that the stadium definitely met the criteria for a “congested area” under FAA rules.

Pending a possible investigation, it’s not certain yet whether Army planners made the right move in organizing such a close-in flyover. But no matter what, it definitely made an impression.

“Truth be told, I expect it was a well briefed and executed evolution, and likely looked scarier than it was,” a second anonymous former Navy helicopter pilot said. “Someone truly underestimated the awesome presence of those birds in close proximity-maybe not the best idea!- but I don’t think reckless is the right word. The FAA and the Army will undoubtedly give it a thorough look.”