Deported veterans have trouble accessing their benefits, so San Diego is building a Vet Connect station in Tijuana to help them out

The effort is to ensure deported veterans still have access to veterans service representatives and the benefits they are entitled to, including medical care and housing assistance. 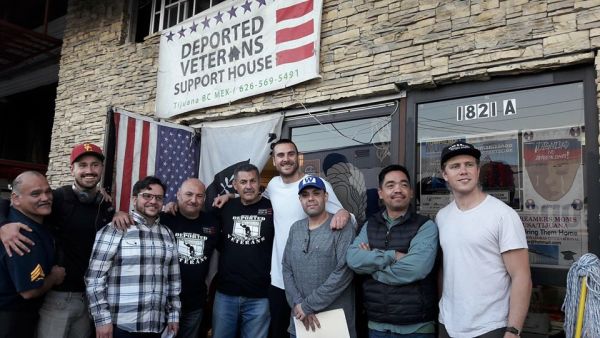 Every U.S. veteran is entitled to certain benefits because of their military service, but ensuring they receive those benefits can be a difficult task especially if are veteran who has been deported.

San Diego County is hoping to play a small part in changing that though.

On Tuesday county supervisors unanimously approved establishing a Vet Connect station in Tijuana in an effort to ensure deported veterans still have access to veterans service representatives and the benefits they are entitled to, including medical care and housing assistance.

Vet connect stations use a secure video teleconferencing system to allow veterans to connect with Veterans Services representatives from the Office of Military and Veterans Affairs . They provide a platform for veterans to receive extensive benefits counseling and any other assistance they may need.

First introduced at some San Diego County libraries in 2015 at the request of Supervisor Dianne Jacob, they have since expanded to eight libraries throughout the county and have proven especially beneficial for veterans living in rural areas.

Veterans groups have contended that hundreds of veterans have been deported.

“I think most Americans are shocked and surprised to realize we as a country are deporting honorably discharged veterans of the U.S. armed forces,” said Supervisor Nathan Fletcher, who introduced the idea of opening a Tijuana location in December.

“While that is a federal issue that has been going on in many administrations for many years that we can't address, we can step up and try and extend our county services … to those same veterans who served in the same wars and wore the same uniforms.”

The Tijuana Vet Connect Station will be located at “The Bunker,” also known as the nonprofit Deported Veterans Support House. It is estimated to cost up to $27,000 to get the station up and running, and $4,000 annually on an ongoing basis. Those funds will be included in the county's Health and Human Services Agency budget.

Veterans advocates praised the idea of the station, including Hector Barajas, an Army veteran who heads the Deported Veterans Support House.

Barajas, who was honorably discharged in 2001, deported in 2004 and then became a U.S. citizen in 2018, said his group works with deported veterans from all over the globe, and many of the veterans have family in San Diego County or did their military training there.

“This definitely is a much needed program and it will help these guys with their VA benefits and improve their quality of life,” Barajas said.

The Board of Supervisors will next meet Wednesday morning at 9 a.m. downtown at the County Administration Building.